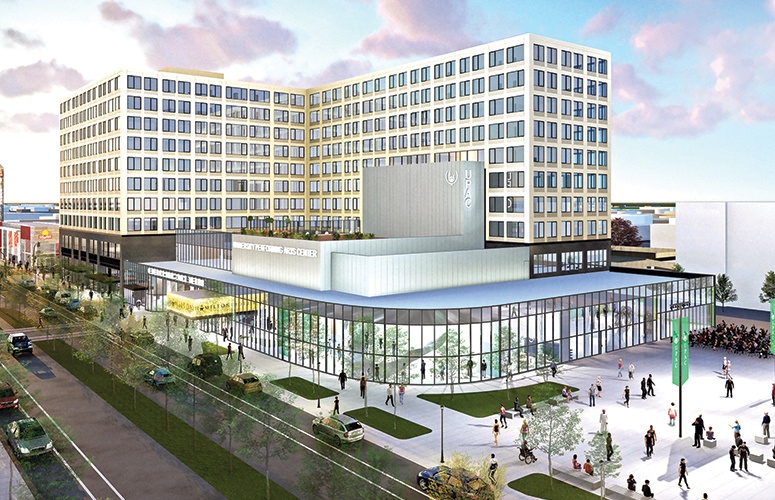 University Place Will Help Showcase the Arts in Jersey City

$400-million development is set to be a gamechanger for the area.

New Jersey City University’s (NJCU) $400-million University Place development is set to be a gamechanger – not only for the university – but also the surrounding community in Jersey City.

The 22-acre venture off West Side Avenue will contain: retail, commercial, and residential space; a 500-seat state-of-the-art University Performing Arts Center (University PAC); the Center for Music, Dance and Theater, which will serve as a cutting-edge academic complex for instruction in the performing arts; outdoor performance space and more.

“We said, ‘we need to take this property and develop it in a way that would benefit the community, allow us to add more student housing, more classroom spaces, and to get a performing arts center – which would double as a classroom for us,’” says NJCU President Sue Henderson.

Public-private-partnership (P3) legislation is playing a key role in the synthesis of University Place, as it has allowed NJCU to identify developers interested in building housing on the property via ground leases.

“We’ve signed contracts with two developers who will put up a total of four buildings,” Henderson says. “The first one to go up was Rivet (a 163-unit luxury apartment complex) last year, which is filling at a rate ahead of what was anticipated.”

The importance of P3 is not lost on Henderson.

“I have colleagues around the country in states that haven’t passed [P3 legislation], and they are struggling because they are at the mercy of when their state wakes up and says, ‘Oh, I’ll give you some bond money to refurbish your buildings,’” she adds.

The centerpiece of University Place will be the University Performing Arts Center and a 10-story, 320-unit residential building – a $90-million development set to begin in the fall which will also include the university’s Center for Music, Dance and Theater. The project is anticipated to be completed in 2021.

Henderson points out that NJCU already has a strong and established music, dance and theater program, but its theater space is lacking. The new performing arts center will change that, bringing the theater space available up to par to match the talent that runs through the university.

In fact, upon completion, the University PAC will serve as the new academic home to the renowned Joffrey Ballet School, with NJCU acting as its academic partner.

“We are connecting with what is already going on in Jersey City, but we are also trying to bring another level in, which I think we are going to be able to do once we get the performing arts center up,” Henderson says. “I’ve had several people say to me that this development will be the lynchpin that will get all the other pieces of property in the area developed. … I think it’s going to be the impetus that helps brings other things along.”