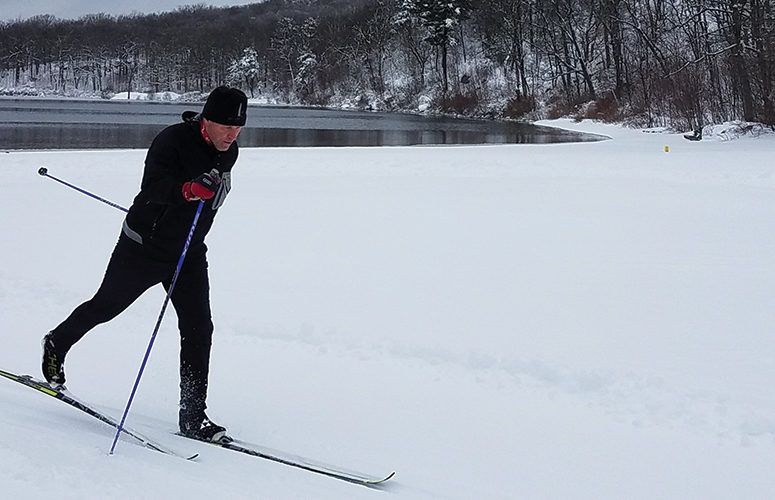 Ski, skate and shop when the weather outside turns frightful.

When people view New Jersey through the lens of tourism, they likely think of its beaches. It’s tough to blame them, as the Garden State boasts nearly 130 miles of coastline that serves as the perfect summer getaway for hundreds of thousands of visitors each year.

But when the state’s shore towns begin to wind down for the winter, New Jersey residents and visitors alike can find plenty to keep them occupied when the temperature outside inches closer to freezing.

From taking on one of the state’s snow blanketed mountain resorts, ice skating, or shopping, there are enough activities to make people count down the days to the state’s first snowfall with eager anticipation.

“Winter is certainly a big piece of the larger tourism picture for New Jersey,” says Evan Kovach, director of sales and marketing, Mountain Creek Resort. “Many people think of the Jersey Shore as the only attraction in the state for tourism, but the Skylands Region in northwest New Jersey has been booming for years between the four-season activities that are offered at Mountain Creek Resort and the countless other options for outdoor recreation (state parks for hiking, swimming, kayaking, fishing, hunting, etc.). Touching on the ski industry as a whole, this past winter was one of the strongest in recent memory, and Mountain Creek experienced its longest season in history with 115 straight days of skiing and snowboarding.”

In terms of its winter offerings, Vernon Township-based Mountain Creek boasts more than 167 skiable acres and more than 1,000 vertical feet across its four interconnected peaks. Visitors can enjoy downhill skiing, snowboarding and snow tubing at the resort.

“While we see both overnight and day guests, the majority of our visitors come for the day, as we sit within a 90-minute drive of almost 20 million people,” says Kovach. “Additionally, season passes are very popular, and a segment that continues to grow for us.”

Mountain Creek’s lodging options include Black Creek Sanctuary, a nearby luxury townhome community two minutes from the resort’s base; as well as The Appalachian, which is located at the base of Vernon Peak and offers studio, one- and two-bedroom units complete with kitchens, working fireplaces, mountainside views, a heated outdoor pool and hot tub, underground parking, ski/board storage lockers, family game room and a state-of-the-art fitness center.

If the thrill of downhill skiing or snowboarding isn’t your thing, perhaps the more laid back nature of cross country skiing is.

“Once you experience cross country skiing and fall in love with the activity, it is a waiting game in the fall to see when enough snow will accumulate on the ground, allowing you to get out and ski,” says Hans Karlsen, owner of Sussex-based High Point Cross Country Ski Center. “On cross country skis, you move slower than on downhill skis, and it is easier for skiers of all ages to communicate and socialize as a group. There’s also less of a wind chill factor, which makes the activity even more enjoyable for skiers of all ages.”

The ski center is located at New Jersey’s highest elevation and boasts average temperatures that are 5-10 degrees less than the rest of the state, which aids in keeping the trails’ snow from melting.

In fact, Karlsen says that in an effort to not be completely at the mercy of Mother Nature, High Point actually makes its own snow.

“We draw water out of a lake and use a portable snow making system with snow guns distributed along the trail,” he explains. “Only a handful of cross country ski centers on the East Coast have invested in the technology.”

Accessible to all Skill Levels

Kovach says that introducing new guests to the resort is a huge focus not just for Mountain Creek, but for the industry as whole.

“We’re a big fan of the ‘rising tides, lift all boats’ mentality, and we work collaboratively with a number of other resorts in the area sharing ideas on how to grow the sports,” he says.

“Our focus is on ensuring guests, who come for their first time, have great experiences so that we can convert them to lifetime participants. New for this season, we will be offering guests the opportunity in which, one day per month, they can come out and try skiing and snowboarding for just $25. This includes everything they need: tickets, equipment rental, helmets and a lesson. We call these our GoSNOW Days.”

“Twenty-five percent of all our customers on average take lessons. Our instructors are certified by Professional Ski Instructors of America, and we have individuals with racing backgrounds on international levels,” he adds.

An article touching on tourism in New Jersey wouldn’t be complete without mentioning American Dream, which boasts a plethora of activities that can be enjoyed in the winter months, such as Nickelodeon Universe, the largest indoor theme park in North America; the DreamWorks Waterpark; an NHL regulation-sized ice rink; as well as hundreds of shops, restaurants and other services that will be opened over the course of the next two months.

Big SNOW replicates an outdoor winter environment 365 days a year, with real snow being made by introducing tiny molecules of water into the cold air from specialized units in the ceiling. As the water falls, it freezes and turns to snow.

American Dream officials say that projected visits for Big SNOW are around 500,000 visitors per year. The US ski industry sees around 1 million new participants per year, and Big SNOW alone will increase ski and snowboard trials in the US by more than 10% annually, according to American Dream.

“Skiing and snowboarding are sports that may seem intimidating to outsiders since they’re historically built around a passion for the outdoors, coupled with the appreciation for perfecting a skill,” Mountain Creek’s Kovach says. “That said, they’re more accessible than ever, and with advances in equipment technology and teaching methodology, it’s easy for someone who’s never been exposed to these sports to come out for the day and have an incredible time.”