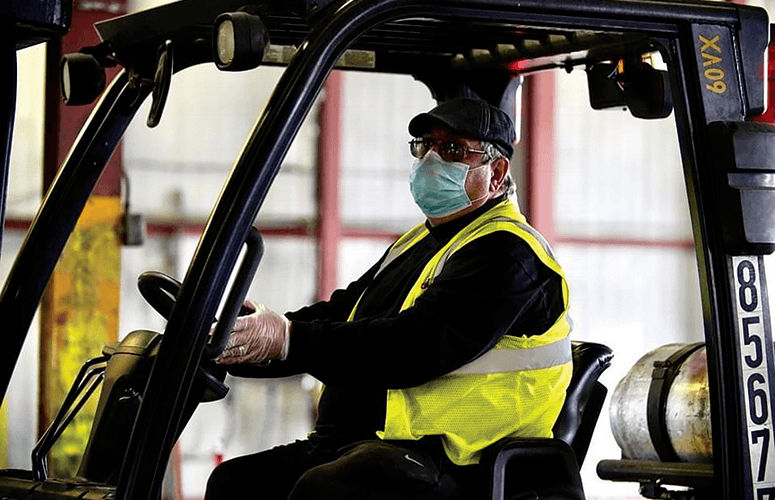 A port warehouse worker with mask: The NYSA sent detailed guidelines to the unions, employers and workers at the port in early April and continues to conduct daily temperature checks on more than 3,500 workers covering three shifts per day.
General Business

New Jersey’s transportation, logistics and warehousing industries have faced major challenges since the COVID-19 pandemic began last year, as they instituted new safety protocols that made work more complicated at a time of increased demand from quarantined consumers.

The task of protecting essential workers while moving goods through the nation’s second largest seaport and distributing them to the 38 million people within a two-hour drive of central New Jersey, as well as the rest of the country, has been especially daunting in the unpredictable marketplace of the global pandemic. Accurate business forecasting has become almost impossible.

“So far, the pandemic has resulted in two distinctly different markets,” notes New York Shipping Association (NYSA) President John Nardi. From April through July, year-over-year volume was down 7.5% to 16.4%, hitting its low in June. Volume picked up from September through December with monthly gains of 10% to 20%. “We went through a four-month period of having up to 20% of the workforce with no work, to full employment for the past few months,” he says.

The work of the port changed as COVID-19 safeguards reduced the number of machines that workers share, increasing labor intensity. Facilities stayed open for longer hours and on weekends as other elements of the supply chain began to break down: Trucker resources were challenged by increased demand throughout the logistic market, as well as international freight and domestic operations. Warehouses, already at 10-year occupancy highs, began to reach capacity. It took longer to empty shipping containers and return them to the port.

“Increasing the ‘turn-times’ of delivered cargo resulted in spot chassis shortages, which have subsided. Not having chassis to pick up containers at the marine terminals resulted in increased dwell times and higher inventories. Again, this has also subsided,” Nardi says. COVID-19 cases in the port increased dramatically when the second wave hit in late September. “Because of this, we didn’t begin to hire additional people until the end of November, and that process continues,” he explains.

The New Jersey Motor Truck Association released a study on May 5 that showed long-haul trips down considerably as container imports at ports dried up. At the same time, local trips under 100 miles increased by more than 100%. Nearly 70% of specialized and tank truck operations were negatively impacted, especially owner-operators and small fleets, of which 80% reported having no disaster plan in place when the coronavirus hit.

The COVID-19 pandemic accelerated e-commerce and heightened the demand for warehouse space, especially for refrigerated and cold storage space to address the growing demand for food supplies.

“Our real estate service providers and development teams continued to seek new opportunities for both new construction and redevelopment to help accommodate the robust demand,” says Matthew Dolly, director of research for Transwestern’s New Jersey office. The New Jersey industrial-warehouse market absorbed almost 25% more space during 2020 than the previous year and occupancy grew in 17 of 25 submarkets.”

By the end of the third quarter of last year, the central New Jersey industrial market had a vacancy rate of just 1.7%, even as 6.4 million square feet of new construction came online, according to CBRE’s third quarter Northeast industrial market report. Along the Northeast Corridor, nearly 40% of industrial construction underway was pre-leased. In New Jersey, the problem is finding places to build new, state-of-the-art warehouses.

“There is plenty of capital out there for the industrial property sector, but very limited supply,” Dolly says, adding that the shortage could push asking rents into the high teens this year.

Managing the Logistics of COVID-19 Workspaces

Dolly points out that Amazon accounted for a substantial amount of overall leasing in New Jersey last year. The e-commerce giant had more than 34,000 employees here in September when it announced plans to hire 6,900 more.

“For a company like Amazon, where we can have thousands of people working in buildings that span more than a million square feet, making the right decisions and rapidly implementing them was not trivial,” Ryan Smith, director of North America customer fulfillment operations for Amazon, says.

“We swiftly overhauled our facilities, systems and daily processes – making more than 150 changes within a matter of hours and days – to support safe social distancing,” Smith says. The changes included redesigning break rooms, work areas and traffic flows; tripling the janitorial teams and increasing the depth and frequency of cleaning daily; and staggering shift starts and break times. Amazon even redeployed more than 3,500 workers to implement and enforce social distancing.

But even with its ramped-up focus on protecting workers, Amazon had to shut down its Robbinsville distribution center for four days over Christmas after finding an increase of asymptomatic coronavirus cases and reported cases at other New Jersey facilities. The company now has the capacity to daily test tens of thousands of frontline workers for COVID-19 across hundreds of sites, Smith says.

Nardi says the NYSA, which sent detailed guidelines to the unions, employers and workers at the port in early April, continues to conduct daily temperature checks on more than 3,500 workers covering three shifts per day. The shipping association also created a fund so longshoremen, who don’t get paid sick days, don’t fear staying home and losing income if they get COVID-19 or quarantine due to close contact with an infected coworker. “We found that one positive COVID-19 case would result in the quarantine of up to 10 other workers. At this rate, it wouldn’t take long for the workforce to be reduced to the point where the port would be paralyzed,” he says, adding that his organization continues to do weekly PPE calls with the unions, the Port Authority of New York and New Jersey, and the Metropolitan Marine Contractors Association.

Nardi remains optimistic about the year ahead.

“The latest forecast for the first quarter of 2021 remains strong for the port industry,” he says. “I believe that supply chain challenges in other ports, where the cooperation and communication have not been as successful as in New York and New Jersey, will result in a shift of cargo to our port. We hope that as most people get vaccinated, the market settles into its traditional and forecastable peaks and valleys and the cargo that shifted to New York and New Jersey will continue to utilize our gateway.”

Philanthropy Amid the Pandemic