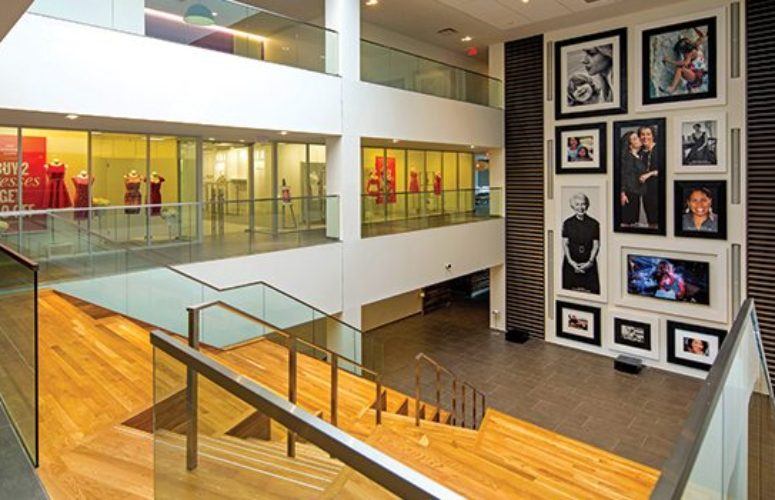 Structure Tone completed this new Dress Barn headquarters in Mahwah. The building was stripped down to steel and expanded by 55,000 square feet for a total of 160,000 square feet. Dress Barn came from a warehouse in Suffern, New York, into this new facility.

With a growing economy, renovations and new projects are ‘groundbreaking.’

Job growth is back, albeit modestly, but that is enough to encourage the major construction companies doing business in New Jersey. Offices may be lagging, but industrial, residential and mixed-use real estate is generating activity. So too are such sectors as education and healthcare, arguably the stars of the Garden State’s construction scene. Finally, the state’s infrastructure is another source of activity across the state.

In this article, we reveal what some of the major contractors, (based on Engineering News-Record’s “Top 400 Contractors” 2015 listing) are doing in the state and across the nation, as well as hear their assessment of the current and future marketplace.”

A leading general contractor, Turner Construction Co., focuses on everything from offices, to education, sports, healthcare, entertainment, correctional facilities, pharmaceuticals, airport terminals, data centers, telecommunications and manufacturing, according to Mark Romanski, vice president and general manager. New Jersey projects include a new 550,000-square-foot, six-story office building for pharmaceutical company Celgene in Summit. “This addition to their campus will help Celgene support its growing staff, which is itself evidence of a busy economic climate,” he says.

Turner is also working on a 285,000-square-foot outpatient cancer center for Memorial Sloan Kettering in Middletown. Higher education work includes the Arts and Transit project at Princeton University, including three new arts buildings for the Lewis Center for the Arts and Department of Music.

“We are also transforming the historic Hahne’s department store building in Newark into a mixed-use facility with 160 apartments, over 80,000 square feet of retail space, and more than 80,000 square feet of commercial space split between the original structure and an adjacent 110,000-square-foot building now under construction,” Romanski says.

Elsewhere, Turner, which will complete approximately $10 billion of projects in the US and $1 billion internationally in 2015, is currently working on: the 73-story Wilshire Grand Center in Los Angeles; a 13-story, 317,000-square-foot office building in Seattle for Amazon; and the 51-story Torre BBVA Bancomer Latin American headquarters in Mexico City.

“It’s a very exciting time for construction,” Romanski says. “In New Jersey, there’s a lot of development providing opportunities in higher education, commercial, healthcare and residential. We’re seeing clients who put off work during the economic downturn begin to drive those projects forward. We’re seeing a number of redevelopment projects and major renovations, with developers transforming and repurposing spaces for new types of tenants.

For New Jersey, John Fumosa, vice president of Gilbane, Inc., agrees: “There’s a lot of work out there. For the past three or four years, we’ve grown 10 to 15 percent a year in the state.”

For Gilbane, which does $3.8 billion a year internationally and $3.4 billion in the US, areas of construction expertise include higher education. Current projects include a $50-million classroom/laboratory facility for Rutgers in Newark and a $45-million life science building for Stevens Institute of Technology in Hoboken. The company is also doing considerable K to 12 work, including the Oliver Street and Elliott Street schools in Newark, $48 million each, and PS 20 in Jersey City, also $48 million.

In other sectors, Gilbane recently completed a $35-million food processing plant in Clark for Kerry Foods, is working on a $75-million Bergen County agency building, garage and courthouse renovation, and a $38-million emergency room renovation and addition at Hackensack University Medical Center. Finally, the company is working with the New Jersey Department of Community Affairs on post-Supertorm Sandy program management.

Elsewhere in the US, the company is also working on high-rise development in New York City’s Hudson Yards, according to Fumosa.

Current projects include everything from the new Dress Barn headquarters in Mahwah, to the restack at Horizon Blue Cross Blue Shield of New Jersey in Newark. The former is an example of adaptive reuse: “The building was stripped down to steel and expanded by 55,000 square feet for a total of 160,000 square feet – it’s an example of the transformation of the workplace,” White says. “Dress Barn came from a warehouse in Suffern, New York, into a new facility with light, amenity space and conference space. It’s also an example of putting more people into less space.”

Structure Tone also repositioned Colgate’s technology campus in Piscataway, with a new 90,000-square-foot building, a parking deck and a reworking of its existing campus. It completed a similar repositioning in Piscataway for Ericsson.

Then there’s Structure Tone’s hallmark project: The company did all of the interior work for Prudential’s new tower in Newark. “It is a very transformative approach by an old-line company,” White says. “The amenity space is spectacular, focused on staff retention and what Millenials are looking for.” Those amenities include large conference centers, a fitness center, cafeteria, zen gardens and a full outdoor top-of-the-parking-garage garden and walking track.

Out-of-state, Structure Tone projects include subsidiary L.F. Driscoll’s constructing the new Comcast tower in Philadelphia and the new Penn First Hospital for the University of Pennsylvania. It should be noted in the wake of Pope Francis’ visit to the US that it was Structure Tone in New York that restored St. Patrick’s Cathedral. Overall, the company has had a $3.5-billion top line over the past two years, and a $3.8-billion projected top line for 2015. In the tri-state area alone, that number is $1.8 billion.

Looking ahead for New Jersey, “there are positive signs in the market in terms of job growth, albeit modest,” White says. “Any optimism for job growth is certainly good for someone in the construction business.”

For RC Andersen, LLC, which specializes in the industrial market, constructing and renovating warehouses and distribution centers (with most of its work between Exit 6 and 16 and within a mile or two of the NJ Turnpike), “the climate is hot and looks like it should stay steady for at least a few more years,” says Robert Andersen, whose company did $160 million last year and expects to do between $180-$200 million this year depending on the final release of a few projects. “Our product services the largest metropolitan area in the US, and as long as people are consuming food and buying consumer goods, there will be a need for our product.

“There is a push for better product, with higher cube space and the capability of introducing automated material handling,” he explains. “Owners and tenants want the best value out of their premium-priced metropolitan locations – they want state-of-the-art buildings.”

“In New Jersey, the challenge can be the piece of land,” Andersen says. “It can be difficult to find large sites in Northern New Jersey that do not have geotechnical or environmental challenges. That being said, the challenge creates opportunity, as so many major industrial users want to be within 5 to 15 miles of New York City. The industrial building is also a great solution for an environmentally challenged site, as it is inherently a part of the cap with its large slab and parking area.”

Regarding timeframes, “generally the schedules for the larger projects are 10 to 18 months, depending on the complexity of the site conditions and tenant improvements,” Andersen explains. “The modern distribution center can generate about 300 construction jobs and upwards of 1,500 to 2,000 full-time positions. The e-commerce, fresh food distribution center has really been making a charge – it’s like a retail store in a warehouse, where the consumer orders online and the warehouse employee picks the items off the shelf or out of the cooler for same-day delivery.”

Barr & Barr, meanwhile, focuses on commercial and educational projects, as well as healthcare and historical, according to Thomas LePage, executive vice president and operations director-Mid Atlantic. The company has an 88-year track record of successful project completion.

In New Jersey, the company is working on renovations to the 20 Washington Road Academic Building for Princeton University, a $118-million project slated for completion in 2016. Originally built in 1929, it will provide a home for the Department of Economics, several international offices and the Princeton Institute for International and Regional Studies. The interior will be renovated extensively and feature new classroom, office and meeting space, communal spaces and two atriums. “The historic character of the exterior will be preserved,” LePage says.

For Robert Wood Johnson University Hospital, Barr & Barr, in 2015, completed a parking deck and East Tower at a cost of $70 million. The project includes a nine-story garage and new service vault with new substation and generators. On top of the garage are two stories of office space and a data center. “This project required extensive coordination with Amtrak due to the location of adjacent railroad tracks,” LePage says.

The company has also completed a $75-million US headquarters for Bayer Healthcare on a 94-acre site that was the former location of Lucent Technologies and Bell Research Laboratories; and a $40-million investment headquarters and parking garage for MetLife.

Outside of New Jersey, current major projects include the $130-million Cornell NYC Tech – The Bloomberg Center in New York; a new $185-million science center for Amherst College in Massachusetts; and a $62-million fine and performing arts center for Eastern Connecticut State University.

Barr & Barr’s total project revenues for the US are $300 million.

In the educational sector, the company constructed the 165,000-square-foot Richard Stockton–Student Housing V in Pomona, valued at $40 million. In healthcare, the company built the Capital Health Medical Center-Hopewell, situated on 165 acres in Pennington. The company’s total construction revenue is listed at just more than $7 billion.

Joseph Jingoli & Son, Inc., which generates $367 million in construction revenues, is focused on everything from general contracting, construction, project management and real estate development to design/build services, utilities and power delivery, landfill/treatment plants and power generation. Much of the company’s recent and current activity has focused on academia.

Recently completed projects in New Jersey include 14 tower foundations for PSE&G in the Delaware Water Gap National Park, part of the $1.2-billion Roseland to Susquehanna Power Transmission Line upgrade. The initial hurdle was to clear the land and build haul roads to allow crews to access the 14 tower locations.

Creamer also completed construction for PSE&G of a new substation in Camden to add redundancy and later house five new transformers and a new control house. As part of a joint venture, the company completed the replacement of the Court Street Bridge, originally constructed in 1908, in Hackensack.

These top contractors are busy at work, making sure New Jersey’s commercial, institutional and public buildings, as well as our vast land and sea infrastructure network, are in excellent shape so that the wheels of commerce and progress stay in motion.