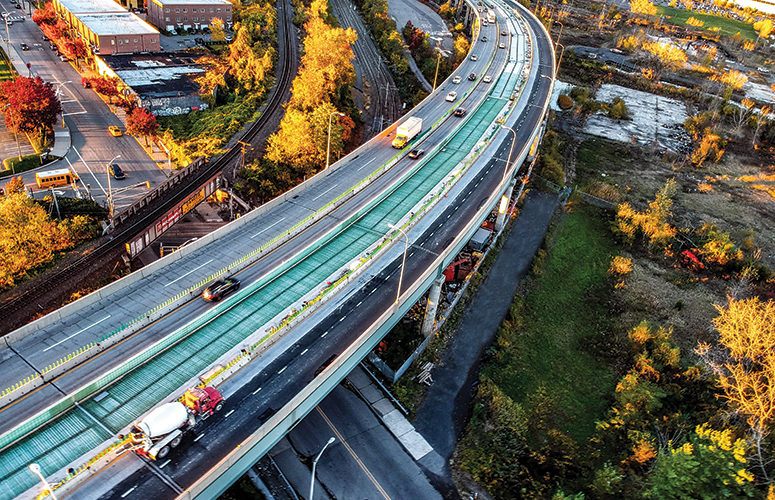 J. Fletcher Creamer & Son undertakes a multitude of highway projects for the New Jersey Turnpike Authority as well as the Departments of Transportation in New Jersey, Maryland and Delaware.
General Business

A spotlight on the work four New Jersey contractors are undertaking in today’s business climate.

New Jersey is home to many of the nation’s best and most well-accomplished heavy construction firms. The following feature focuses on a select few of those top contractors, detailing their major recent projects in the industry, as well as those in the works, while also touching on the “foundations” that make up their own “infrastructure.”

Torcon, Inc., a New Jersey-based contractor that primarily focuses on projects in the Garden State and Philadelphia-metro area, specializes in large-scale projects with significant complexity, such as healthcare and biopharmaceutical facilities.

Several of Torcon’s current projects are quickly adding critical lab space for COVID-19 research and the development of potential vaccines and other treatments. These projects all involve the construction (or renovation) of spaces to create high containment labs (BSL-2 and BSL-3) that meet or exceed any National Institutes of Health / Centers for Disease Control and Prevention guidelines required to handle highly infectious disease agents with select agents.

“These labs are built with robust, independent air, plumbing and control systems designed to protect workers from hazardous materials, although some construction is intended to protect the materials themselves from exposure to people,” says Torcon Senior Vice President Steven Mauer.

A recently completed healthcare project was Cooper Specialty Care Center in Cherry Hill, where Torcon led the transformation of a 100,000-square-foot commercial office building into a dynamic outpatient facility for Cooper University Health Care. The new state-of-the-art facility brings together more than a dozen adult healthcare specialties, diagnostic services, and patient amenities in a single building. Designed and engineered by EwingCole, the Cooper Specialty Care Center includes more than 100 exam rooms along with testing and on-site procedures.

Another significant Torcon project currently in the making is The New Valley Hospital in Paramus. The 372-bed hospital on a brand new campus will feature single-patient rooms to enhance patient privacy, safety and comfort. The design, led by HDR Architects, provides flexibility with such features as universally sized operating and procedure rooms that will enable the hospital to adapt to changing needs and medical technology.

Torcon is construction manager for the 910,000-square-foot facility, which features three seven-story wings and an integrated three-story building that houses the emergency department, imaging and diagnostics. The hospital will open in 2023.

Victor Zucchi & Son, Inc., has an intriguing history. From its inception in 1934, to this very day, one of Zucchi & Son’s main areas of expertise has and continues to be liturgical work.

Victor Zucchi started the company as a mural artist and a stained-glass cartoonist, and over many decades and through the generations, four to be exact, the company has evolved into a full-scale construction and renovation firm whose majority of staff members have worked for the business for 25 years or more.

Zucchi handles all types of grandiose construction projects, ranging from historical restorations to new commercial construction. For example, the firm was recently presented with a Certificate of Appreciation from the City of Paterson Historic Preservation Commission for a job involving the Cathedral of St. John the Baptist. This multiform project spanned two and a half years.

This particular project was a campaign of epic proportions as the existing floor and ceiling systems were completely demolished and re-built and new lighting, plumbing and HVAC systems were constructed. In addition, new structural systems were put in place to support the wood and stone liturgical elements as well as the existing stone columns that support the entire structure. “The transformation of the interior from its former condition is truly breathtaking,” Chris Zucchi states.

Other on-going liturgical projects include St. Peter the Apostle Fellowship Hall renovation in Parsippany, and The Cathedral of Old St. Patrick’s Chapel renovation on Mulberry Street in Manhattan. Interestingly, this was the original cathedral before St Patrick’s Cathedral in midtown was built.

“Currently, our most major project in the region is a condominium rebuild project in Valley Cottage, New York,” Zucchi says. “This building housed 16 condos, of which 12 were severely damaged by a fire and had to be torn down to the foundation. We just started this project in September and it will take us into the middle of 2021 to complete,” Zucchi says.

March Associates Construction, Inc., is a multi-faceted general contracting firm headquartered in Wayne. Historically, it has managed more than $2.85 billion of commercial building projects in the Northeast for a diverse portfolio of clients. It prides its success on having the best standards in project management to include efficient planning, well-managed schedules, and tight budgets. March is family-owned and has a passionate and hard-working management team.

The company is currently building in the following market sectors: mixed-use; multi-residential; senior/assisted living; industrial, logistics and warehousing; and retail, office and entertainment. What’s trending in certain sectors versus others? “We are seeing an uptick in the industrial market, and the residential apartment market is strong as well,” says Bryan Murray, marketing director at March.

A recently finished project in New Jersey for March is the Current on River complex in Hackensack; a 254-unit multi-residential venue that was just completed for The Hekemian Group. Another massive (LeCesse Development/MAS Development) project that is now underway is The Vinty in Elizabeth, a 267-unit mixed-use project featuring 37,000 square feet of retail and a host of amenities. “These two projects are going to be the standard in the multi-residential/mixed-use arena,” Murray says. “Both developers took time to pay attention to every possible detail ranging from the units themselves to the added amenities, including the pools, fitness centers, meeting rooms, and community/common spaces.”

March Associates is listed on ENR’s Top 400 Contractors List for 2020.

Rounding out this impressive group is J. Fletcher Creamer & Son, Inc. The Creamer name needs no introduction, having been synonymous with contracted services for nearly 100 years, as the company was among the original contractors tasked with building The George Washington Bridge in New York in the 1920s.

In 2016, Creamer was acquired by APi Group, Inc. However, it continues to operate as an independent brand within the APi family of companies, and fifth-generation Creamer family members still participate in the business today. Headquartered in Hackensack, the company is recognized as one of the top contractors in the US, with eight offices across New Jersey, New York, and Maryland.

Fletcher Creamer & Son is truly a full-service contracting company serving the business community, governmental agencies, and utility clients throughout the continental United States. The Creamer portfolio consists of a wide array of heavy and highway construction, as well as the installation of fiber optic cable and underground transmission lines for communication, cable TV, electric, gas and water systems, to name just some facets.

Here in New Jersey, Creamer undertakes a multitude of projects on both the Garden State Parkway and New Jersey Turnpike. Additionally, it has been contracted for many monumental projects by the Departments of Transportation in New Jersey, Maryland and Delaware; as well as multiple water main projects and numerous major underground electric transmission mains in New Jersey and other neighboring states. Most recently in New Jersey, Creamer has been tasked with a large-scale project involving directional drilling and placement of underground primary and service wires for Jersey Central Power & Light (JCP&L).

In closing, it is important to point out that every year since 1988, J. Fletcher Creamer & Son has been a familiar sight on ENR’s Top 400 Contractors list. This year was no different.