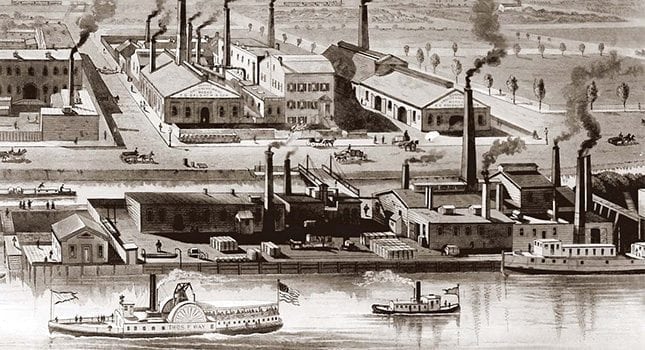 Balbach Smelting & Refining Company (also known as Balbach and Sons Refining and Smelting Company) was a smelting plant in Newark operating in the late 19th and early 20th centuries. It was the first commercial electrolytic refinery in the United States. Until its closure in the 1920s, it was the second largest metal processing enterprise in the country.

The 21st century New Jersey economy is the result of centuries of profound changes in both transportation and economic technology. The earliest centers of economic activity in the 1600s were port settlements, located either directly on natural harbors or inland at the navigable limits of rivers. They served as the focal points of a pre-industrial, agricultural- and natural-resource based economy, almost completely dependent on water-born shipping and movement. It was at those geographic points where agricultural commodities and natural resources products could be transported by wagon or by small boat and then be shipped to markets, and where supplies, products and implements from Europe and other colonies could be delivered and then disbursed within the colony.

The agricultural focus dominated New Jersey through the 1700s as basic road networks developed further, connecting villages, including roads to Philadelphia and to New York (with the assistance of ferries). In addition, some early manufacturing emerged, based on the area’s natural resources base. For example, abundant iron ore in northern New Jersey led to forges and early factories producing cast iron products such as cannonballs used by Colonial forces in the Revolutionary War. The advent of the canal era and then the subsequent emergence of railroads in the 1800s provided the transportation foundation for a fundamental reinvention of the New Jersey economy.

In the decades after the Civil War, the Garden State economy was transformed from strictly “growing things” to strictly “making things.” This was part of a broader national transformation. In the second half of the 19th century, manufacturing firms agglomerated in urban locations because of: rail- and water-based transportation advantages; basic but unique economic infrastructure (roads, water supply, sewers and energy availability); accessibility to consumer markets and export centers; and large pools of skilled and unskilled labor.

New Jersey’s “big six” cities – Camden, Elizabeth, Jersey City, Newark, Trenton and Paterson – all thrived and developed in the 19th century as urban manufacturing centers. Paterson became known as “Silk City USA.” “Trenton Makes, the World Takes,” and “On Camden Supplies, the World Relies” were obviously boosterism slogans, but they were firmly based on powerful economic realities. New Jersey was a technology-driven, urban-manufacturing dynamo by the time the 20th century unfolded, and was at the leading technological edge of global industrialization.

In the last part of the 19th century, Menlo Park in Edison Township was home to what could be called one of the nation’s first industrial research laboratories. There, Thomas Edison produced a series of seminal innovations, such as the electric light and the phonograph, which transformed the nation and the world and generated enormous new industries and millions of jobs.

In the first half of the then new 20th century, New Jersey could simultaneously boast proudly of the mammoth Singer Sewing Machine plant in Elizabeth – the largest sewing machine manufacturing facility in the world that, at its peak, employed 10,000 workers; the RCA radio and Victrola factory in Camden – the largest of its type in the world; and Western Electric in Kearny – the world’s leading telephone manufacturing complex. All of these businesses, and many others, sold their high-in-demand outputs in national and world markets, creating the jobs needed to produce these outputs and generating large revenue flows from the subsequent sales of these products that flowed back to New Jersey. However, by the 1980s, all of these businesses were reduced to a historical memory.

Urban manufacturing dominated America’s economic geography through the end of World War II, and New Jersey was a model example. But then, the unique advantages of urban locations faded as new technologies, infrastructure and workforces spread to suburban areas in the postwar decades. It was soon discovered that such “once-frontier” territories had cost and efficiency advantages and these sites quickly became the new location of choice as postwar consumption and production boomed. The new suburban factories that emerged in the post-World War decades produced the bounty of consumer goods required by an increasing affluent New Jersey. Urban manufacturing began its long slide.

But suburban manufacturing in the northeast and New Jersey eventually lost its hegemony, as postwar reconstruction in Europe and Japan advanced, and as cost competition intensified. First, less sophisticated manufacturing moved to the south and overseas, followed by more advanced and then high-technology manufacturing. These new “once-frontier” territories became the new location of choice, as their infrastructures and lower-cost labor forces became competitive and surpassed those of an aging and expensive northeast. Ultimately, as globalization intensified, even large sectors of southern manufacturing withered under the intense cost advantages of Asia.

Nonetheless, this was also an era of the great industrial laboratory, with New Jersey possessing a unique concentration of leading-edge technology/research facilities linked to manufacturing. Innovation “factories” or “genius factories” such as Bell Labs (telecommunications and telecommunications equipment), RCA’s Sarnoff Labs (electronics) and Exxon-Mobil (energy) were globally preeminent, drawing the world’s “best and brightest” to New Jersey.

By the 1970s, a second major technology-driven transformation was already well underway – the emergence of a post-industrial, knowledge-dependent, information-age economy. The opening of AT&T’s Long Lines complex in Bedminster in 1976 and its global headquarters in Basking Ridge in 1977 quickly became powerful symbols of the state’s post-industrial, high-technology future. New Jersey became “global telecommunications central.” These advanced-stage “teleco” facilities also legitimized once frontier rural/suburban sites as market-acceptable geographic locations for office development in New Jersey. Before that time, the region’s office market was overwhelmingly centered in Manhattan.

The components of the broader economy that emerged from the second major economic transformation were mainly housed in office buildings – post-industrial “factory floors.” A new national phenomenon was the emergence of “edge cities” and suburban growth corridors. This post-industrial suburban shift followed the pattern of manufacturing three decades earlier. By 1990, North-Central New Jersey had emerged as the fifth largest metropolitan office market in the country, with much of the new inventory located in freeway-oriented suburban growth corridors; at that time, 80 percent of all the office space ever built in the history of New Jersey went up in the 1980s. There was a national “buzz” about the emerging Route 1 Princeton corridor – known as the “Zip” Strip – as well as the I-287, I-78, and I-80 corridors, and others.

Occupying the new suburban office inventories in the 1980s and 1990s were technology-dependent professional and business services, the pharmaceutical industry, financial activities, and information and telecommunication services. These economic sectors were at the heart of the new economy, and New Jersey found itself at the leading technological edge of a second global economic reordering. Once again, New Jersey’s economy had successfully reinvented itself.

New Jersey’s two industrial transformations have left the state not only with an enviable economic position, but also with an unparalleled standard of living. However, a third transformation is now at hand – one that has uncertain consequences. Internet-dependent global supply chains have already spatially rearranged the global manufacturing order. Internet-dependent innovation chains are starting to spatially rearrange the world’s knowledge and advanced-services economy. An international economy with an abundance of low-cost, globally-wired, highly-educated, high-technology, service-sector workers is a challenge of unprecedented complexity and implications. Low-cost factories and high-technology production are now being supplemented by low-cost laboratories and high-technology services at new emerging global locations. This is a global situation that New Jersey must directly confront.

In addition, the unfolding of the new century also brought with it significant changes in many of the forces and trends that shaped the second half of the 20th century: growth in employment slowed and its structural composition started to change; new demographics have begun to reshape the workforce, workplace geography and housing markets; profound advances in information technology and the forces of globalization have fundamentally altered knowledge-based work and business models, and suburban office corridors have aged and are no longer state of the art.

These changes, at a minimum, suggest a much less suburban-centric future for New Jersey. The state’s economy will have to be reinvented yet again for a third time. However, this time, the increasing appeal of central locations of both employers and employees, the proximity to mass transit, the ease of access to global transportation, the presence of a dense and highly-educated workforce, and new residential locational preferences by young technology professionals give important advantages to New Jersey. Finally, the renewal of a policy emphasis by the state to pursue economic growth and restore its competiveness is another major advantage as New Jersey once again confronts fundamental and powerful technology shifts. NJB