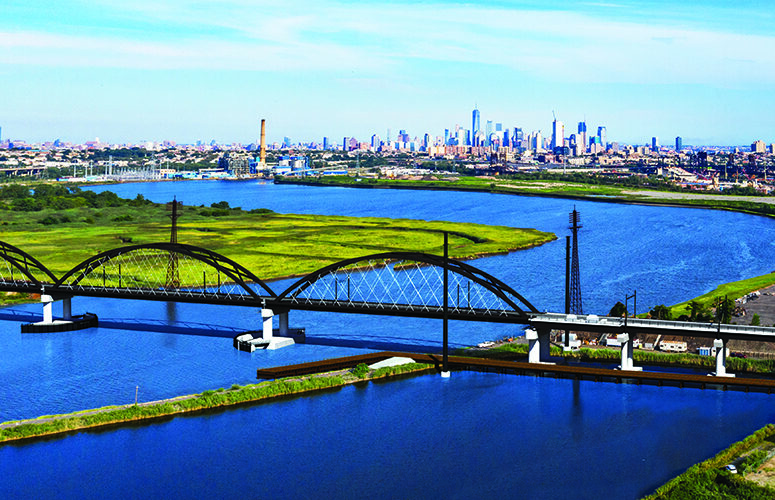 A rendering of the new Portal North Bridge over the Hackensack River in Kearny and Secaucus.
General Business

The Impact of the Infrastructure Investment and Jobs Act

In this and next month’s issue of New Jersey Business Magazine, we delve into what the $1.2 trillion infrastructure bill, signed by President Joe Biden last November, means for the state. On the pages below, we focus on the state’s multifaceted transportation infrastructure network. Next month, we will focus on the legislation’s impact on our water, energy and broadband sectors.

The $1.2 trillion Infrastructure Investment and Jobs Act (IIJA) is being called a once-in-a-generation influx of money that, according to US Senator Robert Menendez (D-NJ), is the largest investment in America’s infrastructure since the creation of the federal highway system in 1956.

New Jersey will be receiving $12.3 billion over the next five years through the IIJA to upgrade and expand its roads, bridges, ferry facilities and mass transit systems and build electric vehicle charging stations.

In breaking it down, state will receive $6.8 billion in highway funding, $4.1 billion in transit funding, $1.14 billion for bridge repair and replacement, $104 million for electric vehicle charging stations, and $24 million for ferry facilities.

The money will not just be used for “hard infrastructure” projects. According to architect George Kimmerle, who heads Harding Township-based Kimmerle Group and is an expert in urban planning and redevelopment, “The spirit of the bill is not just about the hard construction of infrastructure, but also rectifying the negative impacts of past transportation policies.”

He points to the division of once-connected cities and neighborhoods by new highways via the Federal Highway Act of the Eisenhower administration. According to Kimmerle, much of the highway division was gerrymandered on a racial basis.

Now, Kimmerle says some $2 billion of IIJA money will be used to reconnect various communities, mainly disproportionally Black neighborhoods, to fund planning, design, demolition and reconstruction of street grids, parks and other infrastructure.

Overall, the IIJA will create thousands of jobs in the state and vastly improve the quality of life for residents. According to Ray Cantor, vice president of government affairs at the New Jersey Business & Industry Association (NJBIA), “There is no shortage of need for the money because New Jersey is a logistics state. … We are a corridor state with major road and rail systems. We have ports, airports and the need for the Gateway Tunnel project for continued access in New York City. … The goal is to make sure the money is spent appropriately and that it hits the streets as soon as it can.

At NJ TRANSIT (NJT), the third-largest mass transit service in the country, President and CEO Kevin Corbett says the money the agency will receive can be broken down into two components: $110 million per year in formula funds on top of the $900 million the agency usually gets from the federal government; and approximately $90 billion available nationally, for which NJT will enter into competitive bids with other transit agencies.

The extra money NJT will be receiving will go towards the agency’s existing $17 billion, five-year capital plan, which was based on an assessment of all NJT assets and facilities. “The five-year plan is mostly focused on keeping a state of good repair. The federal funding is a part of that, while the balance comes from the Transportation Trust Fund and other revenues streams from the state,” Corbett says.

NJT’s needs are numerous, and the capital plan includes the rehabilitation of train stations, and the upgrading of buses, rail cars, rails, and power substations.

Corbett’s says his biggest priority is the $2 billion replacement of the Portal North Bridge over the Hackensack River in Kearny and Secaucus, which is a major part of the Gateway Tunnel project. The Portal North Bridge replacement, being funded by the U.S. Department of Transportation, NJT and Amtrak, is expected to start soon and be completed within five years.

For the $12.3 billion Gateway Project, which consists of the rehabilitation of two 110-year-old rail tunnels under the Hudson River into Manhattan and the creation of two new additional tunnels, the IIJA is doubling the amount of money in the federal Capital Investment Grants (CIG) program, from $1.6 billion to $3 billion, which the project will by vying for, according to Stephen Sigmund, spokesperson for the Gateway Development Commission.

Total funding for the project includes $1.4 billion from Amtrak and $6 billion from New Jersey and New York through long-term railroad infrastructure loans. The federal portion of the project has been $5.6 billion. With the additional money in the CIG program, “Our ask has been cut in half of total appropriations … that’s a big advantage,” Sigmund says.

Full funding for the project could be in place by the end of the year, with construction beginning by summer 2023. If all goes well, the project is estimated to be completed by 2035.

Thanks to the IIJA, the state will also be receiving $1.14 billion to replace or rehabilitate some 500 bridges that are in disrepair. This equates to $229.4 million each year for five years.

Nationally, the IIJA is making $40 billion available for bridge replacement and rehabilitation.

Additionally, the IIJA is making $15 billion available to build a national network of electric vehicle charging stations, of which New Jersey is expected to receive $104 million over the next five years. In March, Congressman Frank Pallone, Jr. (NJ-06) announced that the state will receive $15.4 million as its first installment, and additional money will be obtained through competitive grants.

At a recent press conference in Asbury Park announcing the first batch of federal money for the state, Pallone said that IIJA funding is a major step forward in the transition to a clean economy that will create jobs and combat climate change.

New Jersey currently has some 30,000 vehicles on the road, but it is far short in meeting its goal of having 300,000 zero-emissions vehicles operating by 2025.

According to NJBIA’s Cantor, 40% of New Jersey’s carbon emissions come from the transportation sector. “So, you are not going to solve the [greenhouse gas] problem unless you address transportation,” he says. To do that, a robust electric grid must be in place to deliver that energy and that could require doubling the amount of electric generation in the state, Cantor says.

NJT has entered this arena with the recent purchases of eight zero-emission buses that will be part of a limited deployment in the Camden region. The transit agency’s goal is to have a 100% zero-emission bus fleet by 2040.

It is evident that the impact of the IIJA on the state’s transportation sector will be far reaching. The infusion of money is sorely needed as 37% of state roads and more than 500 bridges are deemed structurally deficient. As for the entire country, the American Society of Civil Engineers gave US infrastructure a C- rating in 2021.

“If we don’t have a modern and efficient transportation system, it will have an adverse effect on the economy, the environment and people’s quality of life,” NJT’s Corbett says.

According to Kimmerle, “The IIJA has the potential to change our world. Hopefully, it will be done with forethought and coordination … so that we won’t be redoing all of this another 30 years from now.”

The Need for Skilled Workers as infrastructure Projects Abound

The federal Infrastructure Investment & Jobs Act (IIJA) is expected to create nearly 850,000 jobs across the country as construction workers, electricians, engineers and others begin improving and expanding our roads, rails, bridges, ports, water and broadband infrastructure.

However, will there be enough skilled workers to build out this infrastructure when the building trades are experiencing a labor shortage?

“We have to make sure the workforce is in place. It means nothing to have the money and the contracts if there aren’t enough workers available to put shovels in the ground,” says Ray Cantor, vice president of government affairs at the New Jersey Business & Industry Association.

Cantor says the state experienced a construction worker shortage a handful of years ago when a portion of New Jersey Turnpike was expanded. Out-of-state workers were brought in to supplement the workers on the project. “Now, with other states getting their share of IIJA money and pursuing projects, getting construction workers into New Jersey may not be a viable option this time,” Cantor explains.

According to Cyndie Williams, executive director of the Carpenter Contractor Trust (CCT), the IIJA presents “a great opportunity for people who are interested in getting into the trades. These infrastructure funds will create jobs and a steady job pipeline for years to come.”

The CCT is currently offering high school students opportunities through the Carpenters Apprenticeship’s Career Connections program, which introduces students to the crafts of carpentry. This gives them a solid base of knowledge when entering the official apprenticeship program. 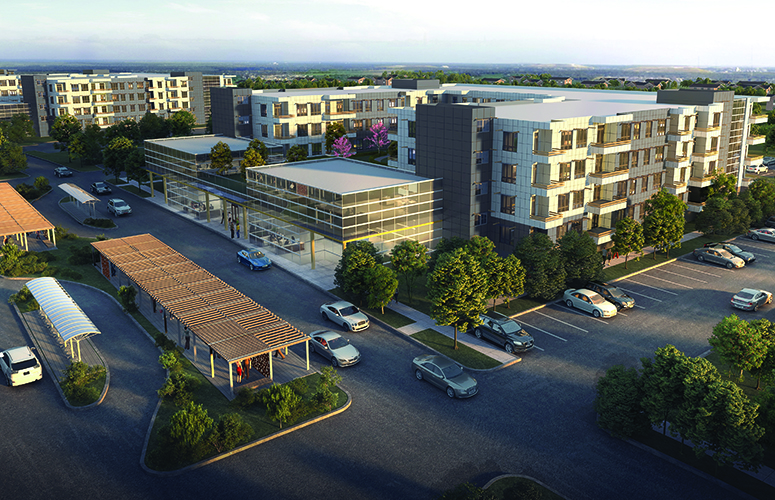 “What makes this an exceptional opportunity is that high school students can learn a life-changing career in their backyard and graduate from an apprenticeship program with zero student debt,” Williams says.

Williams says that, overall, “infrastructure investment is here to help working class families. This means that the taxpayer-funded money paying for these projects must include the safest, most highly skilled, and productive workers available. It also should include fair wages and benefits for the workers building these projects.”

George J. Kimmerle, PhD, AIA, PP, NCARB, founding president and partner of Harding Township-based Kimmerle Group, has spent the last five years studying the infrastructure needs of cities across the country. Commenting on the federal Infrastructure Investment and Jobs Act (IIJA) and the (now in question) $1.7 trillion Build Back Better social and climate spending plan, he comments, “These are once-in-a-generation funding opportunities that will require bold and inclusive thinking.” 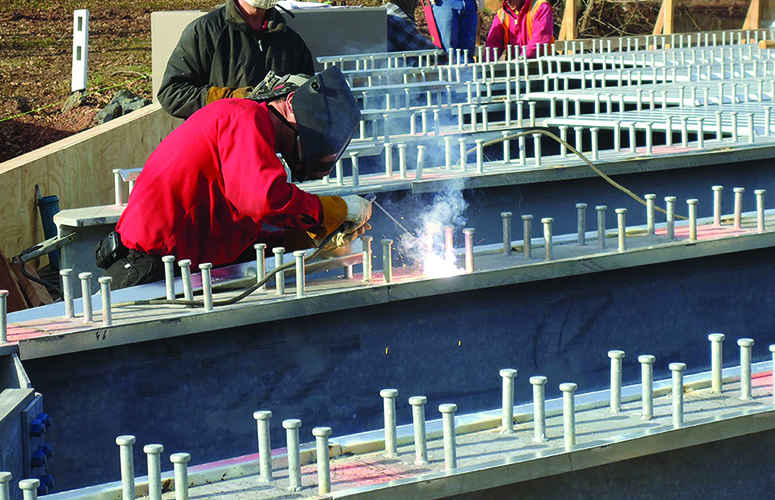 In a recent survey Kimmerle conducted with the US Mayors Association of 1,320 communities nationwide, he found a common, across-the-board theme: Mayors are just as concerned with water infrastructure, affordable housing, and school and healthcare facilities, than just transportation infrastructure.

In his survey, titled “Infrastructure Priorities from a Local Perspective” Kimmerle also discovered that “the blue and red state divide that the media tells us exists, dissolves. Every community on every scale is looking for the same type of social and community level investments.”

He says that of the $1.2 trillion IIJA, $700 billion will be used for previously authorized funding that has been lined up for years by various agencies. However, about $200 billion is associated with unassigned competitive grants for which communities are being asked to prioritize their capital needs and develop project pipelines for things that were previously considered impossible due to a lack of funding.

Because money will be made available to communities, Kimmerle says, “towns will not be as dependent on the developers’ ‘purses’ as they have been in the past. Most communities have had to somewhat compromise in order to get redevelopment activities to happen because they didn’t have the money to handle it themselves. They had to make concessions to the developers, perhaps in the form of tax abatements, higher density planning, less affordable housing and other things that would not have been granted,” Kimmerle explains.

“So, the entire complexion of how redevelopment happens is going to be impacted by these infrastructure dollars because it would give towns the wherewithal to build what they want with a combination of uses that makes sense for them,” he says.

With a solid background in urban planning and redevelopment policy, Kimmerle and his firm are aligning with engineering and law firms to put programs together that will help communities with visioning work; setting priorities, estimating costs and helping them with the grant-writing process.

President Biden Signs the PPP Extension Act of 2021 into Law