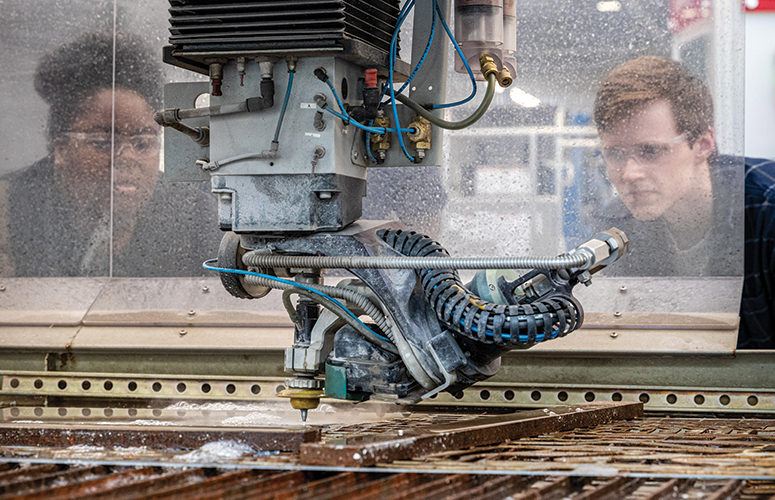 The Factory of the Future

Technological evolution has led to the integration of people, robots and intelligent machines on the factory floor.

New Jersey has a storied history when it comes to manufacturing, and – to this day – the industry remains a vital feather in the cap of the state’s identity. Manufacturing is such a large part of New Jersey’s history that its capital city’s slogan, “Trenton Makes, the World Takes,” pays homage to its roots as an industrial epicenter.

Of course, manufacturing looks a lot different today than it did in the 1800s when the first leather tanneries marked the start of an industrial boom in Newark, the state’s largest city.

“Advanced manufacturing today is very much driven by technology,” says Dr. Samuel Lieber, assistant professor in New Jersey Institute of Technology’s (NJIT) Department of Engineering Technology, and coordinator of the school’s Manufacturing Engineering Technology program. “You have automated systems producing and inspecting parts, and you have environments that are driven by data that are driving your processes, but also collecting information for the future.”

It’s a stark contrast to the manual processes of the past, and the vast array of technological advancements that have disrupted the industry over the past two centuries have presented innovations that would seem incomprehensible to a Newark factory worker in the 1800s.

From additive manufacturing and artificial intelligence, to a demand for a highly educated technology-driven workforce, the evolution of the manufacturing industry has been quite remarkable.

What will factories look like a decade from now? While it’s impossible to predict with perfect accuracy where technology will lead us, Hugh Welsh, general counsel, secretary and president of DSM North America, sees the factory of the future looking similar to how a high-tech research lab looks today.

“With the growing trend towards a more sustainable and circular economy, combined with digitalization and artificial intelligence, the engine of commercial production will be a ‘smart factory,’” Welsh says. “As the name suggests, it is an intelligent, highly connected ecosystem integrating people, robots and intelligent machines where data is exchanged about each aspect of production in real-time, to produce high-quality products efficiently, with relatively little to zero waste.”

Lieber points out that the automated systems present in factories today make for much cleaner and safer environments than in the past, a phenomenon that will continue as factories get even more advanced.

“The future also includes the furthering of collaborative robotics (aka cobots),” Lieber says. “The issue with [traditional industrial robots] has been that you need guarding systems to protect operators and people working around them since the loads that these robots can apply can be dangerous if one is not careful.”

Cobots enable safe interaction with humans in a shared space and the ability for the two to work safely in close proximity, which enriches the collaborative ecosystem that ties humans and machines together in advanced manufacturing.

In terms of the most impactful technological advancements in manufacturing over the past several years, Lieber points to artificial intelligence (AI) and additive manufacturing – also known as 3D printing – as two prime examples.

AI and 3D printing, combined with robotics and human workers, contribute to the “smart factory” concept that Welsh described earlier.

Consider this example of a cell phone manufacturer.

“The software from a cell phone manufacturer’s supply chain operation can automatically order the production of new components of the circuit board,” Welsh explains. “The order is scheduled into the operations and production schedule. If a newly designed part is required, it will be dispatched to design teams. Using 3D printing technologies, a new part can be designed, prototyped and tested in hours instead of weeks.”

Welsh says that the components would then go into production on a line that’s mostly run by AI robots. Each stage of production is monitored by sensors that feed data to analytics software, stored in the cloud. He says that if a defect is spotted, or a new part needs to enter production, the software orders the part and the process begins anew.

“By interconnecting networks and systems with factory floor operations, manufacturers are able to schedule, monitor and produce goods according to their customers, who are often quickly changing to address market needs,” Welsh says.

Technology’s impact extends beyond the innovations seen on the factory floor, as it has also led to a boom in job creation for highly technical skillsets that are in greater demand across nearly all industries.

“As more and more tasks are handled by robots, people with the skills required to design, operate and maintain robotic production systems are in higher demand,” Welsh says. “A generation ago, robotics engineers were rare in an organization. Today, it is an in-demand career path.”

“Letting people know how much technology is actually involved in manufacturing has opened up a new avenue for those who are pursuing areas that they thought were traditionally not manufacturing,” Lieber says.

Today, trade school and apprenticeships are no longer the only ways to enter the manufacturing industry. In fact, not only are there positions for – but there’s actually a need for – those pursuing highly technical paths such as computer science and software engineering, for example.

The ‘State’ of Manufacturing

Citing its highly skilled workforce and continued focus on innovation, Welsh calls New Jersey’s manufacturing community strong and vibrant, and believes that the state is still a good place to do business for companies in the industry.

“Manufacturing is a $38-billion industry [in New Jersey] with jobs averaging a salary of $80,000 a year, higher than the wages paid to many employees in finance, insurance and real estate,” according to Mike Wallace, senior vice president of government affairs at the New Jersey Business & Industry Association.

While the industry continues to do well, more can be done to help further strengthen it.

Welsh points to a lack of tax incentives as one area of improvement, as well as a need to make significant investments in infrastructure in order to prepare for a period of rapid evolution in the transportation and energy sectors, both of which will impact manufacturing.

Additionally, Lieber would like to see more strides in the promotion of the industry.

“I want [children] to understand that this is a career,” Lieber says, adding that he wants to see further public awareness at both the high school and elementary school level. “Further promoting manufacturing at those early stages and explaining the benefits of a career – that is one area we can strive to improve.”

Toward a Brighter Economy and the Design-Savvy Workforce That Will Build it, NJIT Opens Makerspace

NJSBDC Sees the Humanity of Small Businesses Throughout COVID-19 Pandemic