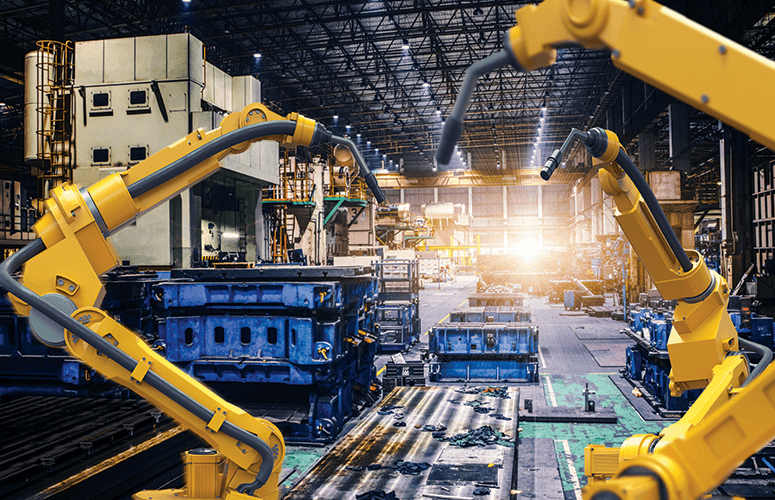 As manufacturing equipment becomes increasingly sophisticated, it offers clear benefits for companies that can afford it.

Although it is routinely noted that New Jersey is home to approximately 11,000 manufacturing companies ranging from machine shops to medical device firms and pharmaceutical producers, perhaps less has been said about the advanced manufacturing these businesses often implement, and its profound benefits in a highly competitive global arena.

While it can be argued that all manufacturing is advanced, the term “advanced manufacturing technology” today may include automation, robotics, data analytics, and additive printing (3D printing), explains Robert Stramara, chief operating officer of the New Jersey Manufacturing Extension Program, Inc. (NJMEP). Other experts note that advanced manufacturing can additionally include, for example, sophisticated materials, laser machining, complex computer networks and nanotechnology.

Advanced manufacturing technology is often termed “Industry 4.0,” which Stramara says is “basically the fourth industrial revolution, where we are utilizing advanced manufacturing equipment and methods to maintain competitiveness, profitability and so forth – and be able to keep pushing the ball forward from a business perspective.”

Singing praises for advanced manufacturing, Fairfield-based Hunter Manufacturing Services, Inc.’s President Ken Hunter explains that his newer equipment is processing heavy stainless steel at speeds that his contract manufacturing company would have only been able to machine aluminum at, 20 years ago. He adds that newer equipment also allows multiple tasks to be completed in one operation, which wasn’t a readily available feature in yesteryear’s equipment.

Paul Schindel, New Jersey Technology & Manufacturing Association (NJTMA) association manager, who is also the president and creative director for Three Bears Marketing Communications, says that newer Computer Numeric Control (CNC) equipment possessed by many of the association’s members has four or five different axes, allowing a solid block of metal to be modified via a drill and/or lathe, and/or to be polished with little or no human involvement aside from initial programming and setup.

Separately, robot prices have gradually been falling overall, allowing more manufacturers to leverage them for routine or menial tasks, and then direct human workers toward higher-level tasks.

However, NJMEP’s Stramara notes that upfront costs in the automation sphere can be burdensome, ranging from a mere $20,000 to a staggering $30 million, for example.

“That’s always our challenge, because at the end of day, these manufacturers are businesses,” he adds. He also says, “It just depends on the system: How long is it going to take to see a return on that ‘X’ amount of dollar investment?”

ROBEL North America Corporation, with a New Jersey location in Edison, is a railroad maintenance equipment mainstay, and its Financial Controller and Operations Manager Thomas Drew tells New Jersey Business magazine that “advanced manufacturing isn’t just about the technology that you can bring into manufacturing; it is all about changing people’s mindsets as well.”

For example, Drew recounts visiting one of the company’s factories in another locale and being told that just two years before his visit, workers had been manually heating metal sheets with a blowtorch so that they could be molded into shape, instead of using manufacturing equipment to do so. The addition of a proper manufacturing machine yielded a safer work environment as well as a faster means for producing the desired result.

The County College of Morris (CCM) is also involved in the manufacturing landscape with the fall 2020 opening of its 31,000-square-foot, cutting-edge Advanced Manufacturing and Engineering Center (AMEC), perhaps emblematic of the intersection of ever-complex manufacturing technology and the need for more workers who can operate it and/or understand it.

Dr. Anthony J. Iacono, CCM president, says that since manufacturers want students training on equipment that is used at their companies, much of the building’s brand new machines were generously donated by local manufacturers, and “are the same [type] that is on their own floors.”

He also says, “At the end of the day, manufacturing is still rooted in measuring, cutting and drilling. There is traditional machinery on the floor, because students need to know how to run that as well. However, there’s also a very, very large amount of ultra high-tech equipment to support careers in automation, lasers – you name it.”

Roughly half of the students using the facility are keen on pursuing a manufacturing career, and the other half aspire to be engineers, Iacono says.

“Many of those students do get internships with local manufacturers, but we also have a lot of arrangements with universities, predominantly in New Jersey, but also out of state,” Iacono says. “We have articulation agreements where [students] can start with us and then transfer to a university.”

Manufacturing companies can train their employees at the center, too, Iacono says: “What the manufacturers are excited about is that the building is a hub for them. It’s a place that they can send their employees so they can continuously have those cutting-edge skills; manufacturing is a fast-changing, dynamic industry. We want the manufacturers in the building to do their own training workshops, and it was built with that in mind.”

With both newer and older manufacturing equipment gracing manufacturers’ floors, locating skilled employees remains a huge issue for New Jersey’s companies, partly due to retirements and also due to a lack of skilled students emerging from vocational schools.

Ken Hunter says, “There have been a lot of advancements in a very little amount of time, with trying to bring manufacturing back into vogue at our community colleges and vo-techs. [However,] the population [coming] out of there is still very thin for us.”

CCM’s Iacono says a need for skilled workers was one reason for creating AMEC: “We have a relationship with dozens and dozens of manufacturers throughout Northwest New Jersey; not just in [Morris County] itself. And by really listening to them, what came together was: We have to expand. We have outgrown our current space.”

The late scholar and organizational consultant Warren G. Bennis once said, “The factory of the future will have only two employees, a man and a dog. The man will be there to feed the dog. The dog will be there to keep the man from touching the equipment.”

However, Bennis has so far been proved incorrect, as manufacturing workers are not only needed for more “traditional” equipment that is still in use, but, also – as NJMEP’s Stramara and other experts note – robots can cause workers to undertake more advanced tasks in a broader and increasingly sophisticated scenario.