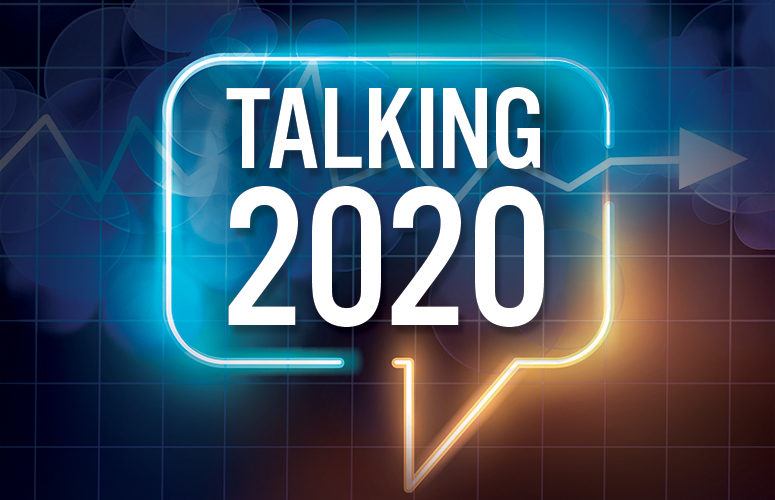 Let’s give a big “shout out” and welcome in 2020; the New Year which begins the third decade of the 21st century. Based on discussions with key business leaders and economists in the state, the following 12 months should see the New Jersey economy grow, albeit at a slower pace. The good news is that a national recession will probably not materialize … the key words here are “probably not.”

At press-time, consumers are still spending, banks are still lending, and the Federal Reserve is expected to keep interest rates at record lows, but what might tip the scale towards a recession are issues that have been around since last year, and have been “at our doorstep” for some time, such as trade talks with China, tensions in the Middle East and this year’s US presidential election.

“We should remember: there has never been a time when there weren’t any potential potholes that could derail the economy,” says Jim Hughes, University Professor and Distinguished Professor of Planning, Dean Emeritus of the Edward J. Bloustein School of Planning and Public Policy at Rutgers University.

Hughes, who in the past has jokingly called himself the “Dr. Kevorkian of the US economy,” isn’t too glum today when he says, “I don’t put a potential recession as a high probability for 2020.”

This past July 1, the US marked its longest economic expansion in history – 10 years and 1 month or 121 months in length. This month, it will be 127 months. “It’s a mature expansion, but expansions don’t die of old age,” says Hughes. “The Federal Reserve usually murders them by increasing interest rates.”

With President Trump attacking the Federal Reserve this past year about not significantly lowering interest rates (it did lower rates three times in 2019), “the Fed is not going to murder this expansion” by raising rates, Hughes predicts.

Regarding job creation, he says employment growth metrics look reasonably well for 2020. “We’ve had 8.5 years of strong job growth. It weakened in 2019, but that is due to labor force shortages,” Hughes says. Among the factors for this shortage is businesses not being able to find people with the required skills to fill certain jobs.

If the trend continues, Hughes sees more job functions being automated, causing immediate short-term pain, but leading to the creation of new and different types of jobs in the future.

At the same time, Hughes sees job growth in the state doing slightly better than Connecticut and Pennsylvania, but lagging New York, which continues to be bolstered by New York City’s economic growth.

New Jersey used to benefit from New York City’s economy, but “we are not getting the demographic component of that economic growth in part because New Jersey is a high cost state,” Hughes says.

“When back office and white color jobs shift out of New York, they used to come to New Jersey. Now they are going to places like North Carolina, Iowa and other states where pay levels and other costs are much lower than here,” Hughes says. “So, New Jersey is going to see below average growth next year compared to the national average.”

John E. McWeeney, president and CEO of the New Jersey Bankers Association, agrees with Hughes on many points, especially on the issue of consumer confidence, which remains strong. “The fact is, more people are working, [and] income and wages, 401(k)s and housing values (in many parts of the country) have increased,” McWeeney explains.

When might that happen? “I suppose a recession or slowdown could be possible in late 2020 or in 2021,” he says.

“The economy is growing, but at a smaller pace, and we are starting to see a pullback in business borrowing,” McWeeney continues, adding that businesses are concerned about issues mentioned earlier such as: the trade war with China, the presidential election, plus other political and global economic issues.

As for the state’s banking industry, McWeeney says that New Jersey’s financial institutions “are in an incredibly strong position today.” Pointing to FDIC statistics from June 30th 2019, he says that state headquartered banks had total capital of approximately $19 billion, up from almost $3.5 billion over the last three years (a 22% increase). Deposits have increased by 20% over the same time period to $122 billion.

“We have fewer banks today (71 headquartered banks in the state), but the collective balance sheet remains significantly higher,” McWeeney says. “Many banks have merged, but they are doing a lot of business and are in a strong position to meet customer needs.”

On the equity investment side of wealth and savings, Bradley Bofford, managing director and partner of Fairfield-based HighTower Financial Principles Securities, sees a mixed bag when talking about the stock market in 2020. “Coming off a strong year where the markets entered their longest ever bull runs, some experts are calling for another year of strong gains, while others are flashing warning signs of an impending recession,” he says.

“While we think the economy will sidestep a recession for at least another year, we see more muted and volatile market returns in 2020 as uncertainties around trade, earnings, and division in Washington, D.C. are at the forefront of the markets,” Bofford explains.

Commenting on the impeachment proceedings that continue at press-time, Bofford explains, “While we believe it is largely accepted that the House will vote to allow the impeachment proceedings to advance to the Senate, should further evidence surface – or if there is any indication that the Senate will move towards a conviction of the president – there is the potential for market volatility to surface.”

Overall, he says, “While we do not see the US economy entering a recession in 2020, the potential for one quarter of negative GDP growth is possible.”

All of these predictions come on top of the New Jersey Business & Industry Association’s 61st Annual Business Outlook Survey, which appeared in last month’s issue. The survey mirrors some of the comments made by the experts in this article, but the feelings of NJBIA members are a bit more dismal. For example, only 12% of respondents reported the New Jersey economy will fare better in the first six months of 2020 than in 2019, while 40% said it will be worse.

Long story short: an economic slowdown is occurring. Whether a recession materializes depends on consumer spending, but it seems as if the business community is already the harbinger of negative news.