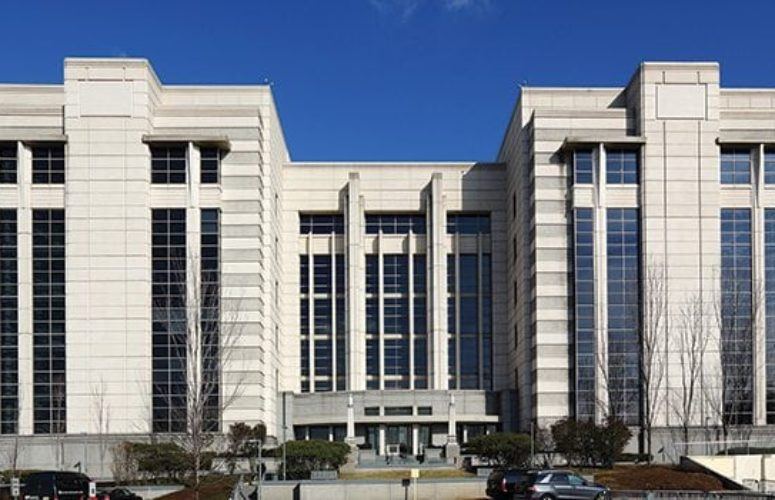 Although it is awaiting accreditation, pictured above is what is expected to be The Seton Hall-Hackensack Meridian School of Medicine (formerly Roche’s site in Nutley/Clifton).

The healthcare sphere is rapidly evolving, and partnerships between healthcare institutions and universities are increasing in tandem.

Cutting-edge Garden State businesses are today increasingly and extensively partnering with colleges and universities, yielding innovative developments that assist all involved parties, often including the general public. And so it is, too, with the evolution of New Jersey healthcare institutions (e.g., hospital networks) that are extensively collaborating with higher education institutions, as human minds and computers on both sides unite to solve problems, drive the economy and improve patient care.

Some might say that the collaborations the healthcare powerhouse Hackensack Meridian Health has recently formed look like a celestial constellation when diagrammed on a sheet of paper. In effect, the healthcare network is collaborating with: Seton Hall University, in efforts to form a school of medicine; Memorial Sloan Kettering Cancer Center; the New Jersey Innovation Institute (NJII) at the New Jersey Institute of Technology (NJIT); and Georgetown University, for example.

Robert C. Garrett, co-CEO of Hackensack Meridian Health, tells New Jersey Business, “In the example of NJII and Hackensack Meridian partnering, we are [in part] bringing new companies to market. … That ties into an ecosystem and economic development. Then, if [we] think about the partnership with Seton Hall University for the new school of medicine (Editor’s note: the school is awaiting official accreditation and has not yet opened), and the research institute that will be housed up in Nutley and Clifton – that is going to be a real hub for biosciences, and will be a revitalization for that region of our state.”

Not only are the rising partnerships between various healthcare institutions and universities large and logistically complex, but the underlying reasons for forming them in the first place are especially so. There is clearly a shortage of primary care physicians, but there are also demonstrable shortages in allied health, as well as in OBG-YN – and other spheres – and creating or expanding medical schools may ameliorate this. Some experts assert that high medical malpractice costs are driving healthcare providers (and would-be healthcare providers) out of the state, while others argue that medical students seek higher salaries in other states. Still, others list additional reasons for the shortages – or cite them all as contributing factors, to differing degrees.

In tandem – and arguably connected to – the above situation is the changing face of the broader healthcare landscape, as various entities often strive to reduce healthcare costs by: establishing the most effective and efficient ways to treat patients, including reducing the high volume of unnecessary medical tests which burden the healthcare system, and, among other pursuits, investing more in preventive care to not only help patients, but to, again, lower costs.

A distillation reveals basic facts: there is a shortage of some types of healthcare professionals in New Jersey, healthcare laws have evolved, healthcare costs are high, and entities are trying to improve these situations via wide-ranging innovation and other tactics.

He adds, “Quite frankly, that was the springboard to the initial part of the program with Hackensack, with a fairly specific problem to solve. I am not at liberty to get into the detail of the item, but it was a specific challenge to solve that we rallied around. Ultimately, within probably about a 30- to 45-day [period], [we] put together a software prototype, grounded against that problem to be solved. That has flourished into a prototype within the health system that [Hackensack is] actively using and co-developing, and it may move into a next phase of external commercialization.”

This is a beacon not only for Hackensack, but its patients and NJIT. Bartiromo adds, “When we talk about NJIT and Newark, specifically – and New Jersey at large – it is really [centered] on the release of the skills and talents of NJIT’s engineering students, faculty and staff … to better link up with industry, and do that in a way that can help better engage our corporate partners. For Newark, it ultimately means an increase in economic development and job creation, in our backyard. And the lab, at large, brings more R&D capability supporting New Jersey-based companies to advance their R&D and competitive business objectives.”

Bonita Stanton, MD, founding dean, Seton Hall-Hackensack Meridian School of Medicine, and the president, academic enterprise, Hackensack Meridian Health, again stresses that the medical school has not yet received accreditation, and that there are no students there, yet.

In broad terms, she says, “One of the wonderful things about starting a medical school is that the whole creation of that enterprise can be around your vision, and around the constructs of the mission that is going to achieve your vision. You don’t have that when you are working with an existing medical school, because a lot of things that have been put in place are hard to change and adapt.

“It is a real prize to be able to mold your medical school to fit the healthcare needs of your state, and of your nation.”

Gracias explains that the Association of American Medical Colleges indicates there are essentially four options for academic medical centers. “We can form a new system if we can afford it, and grow it from the ground up; we can partner with others who are already in the healthcare business and create a collaborative network; we can merge ourselves into a system; or, we can just be prepared to shrink in isolation, and we won’t be a significant force in how we care for, or train, the next generation,” he says.

“At Rutgers, and Robert Wood Johnson Barnabas, we have decided that we are not going to shrink in isolation, but instead we are going to go after partnering, and creating a wonderful, collaborative, academic health system, the depth and breadth of which New Jersey has never had before. It is about creating a new type of academic health system within New Jersey that will be able to offer all types of preventive care and therapeutic intervention for our patients in an environment where we can bring trainees in to learn, grow and be educated. That is something that is going to be new, and it is the answer to where healthcare is going. We feel prideful that Rutgers and Robert Wood Johnson Barnabas, together, are part of that answer for New Jersey.”

He adds, “All of those clinical faculty and providers, along with more than 2,500 providers from Robert Wood Johnson Barnabas Health, now are starting to work together to deliver care together. That’s starting to happen. That will continue to grow as these service lines come together and we start to deliver more and more care, together.”

At a different institution, Ken Blank, PhD, senior vice president for health sciences at Rowan University, says, in part, “The higher education reorganization act gave [us] the Rowan School of Osteopathic Medicine, which was originally the UMDNJ School of Osteopathic Medicine. The Rowan-Rutgers-Camden joint board was created out of that, to be able to establish collaborations between healthcare institutions in Camden and the construction of two new buildings that have been spearheaded by the joint board. That will involve Rutgers-Camden, Rowan and Camden County College, and really has huge potential in terms of job creation, creating the ‘meds and education’ corridor for Camden and all of South Jersey. This will be able to help create economic development and jobs, and bring corporations into New Jersey, but also into Southern New Jersey … creating the jobs and the business tax base that’s extremely important to the state.”

He adds, “I would expand that to say that our medical schools work together with the other colleges within the universities, as well as the healthcare centers that we work with, especially Cooper and Inspira, in terms of looking to create new technologies. Physicians have great ideas, and in the past, they may not have had a place to be able to take those ideas, in terms of a new device that may be needed, a new process to improve the efficiency of healthcare, and bring costs down.”

It is impossible to list all the healthcare institutions and universities collaborating in New Jersey on these pages, and perhaps equally impossible to reveal every detail of their endeavors. Rather, in broad strokes, these partnerships illustrate how the healthcare arena is undergoing rapid and – some argue – breathtaking changes, against the backdrop of hyper-paced technological, political, legislative, social and economic evolutions.