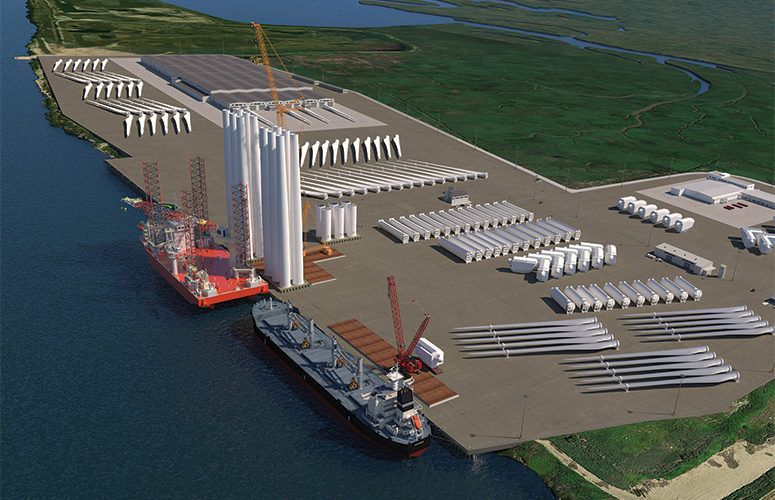 A rendering of the estimated $400-million New Jersey Wind Port in Lower Alloways Creek in Salem County. Plans for the 25-acre manufacturing site and 30-acre marshalling and staging site are all geared toward the production of offshore wind equipment.
General Business

South Jersey Sets Sail with Offshore Wind and Other Investments

Eight-county region’s economy depends on a variety of industries, and the breeze is blowing in the right direction for many of them.

Like much of New Jersey and the nation, the state’s southern eight counties endured a challenging 2020, made all the more frustrating after a banner year for the region’s economic growth and employment in 2019.

As 2021 dawns with the promise of COVID-19 vaccinations returning a semblance of normalcy to society, there is hope and faith that ongoing investments in South Jersey will pay off in a resumption of the region’s pre-pandemic economic success.

“We’re all just waiting for more and more people to get vaccinated,’’ says Marlene Asselta, president of the Southern New Jersey Development Council (SNJDC). “And however long we have to wait, we’ll wait in order to go back to work and thrive and be innovative – and to get back on the track we were on in 2019.”

As the state is working to add 7,500 MW of offshore wind generating capacity by 2035, SNJDC is promoting plans for the $400-million New Jersey Wind Port in Lower Alloways Creek in Salem County. Plans for the 25-acre manufacturing site and 30-acre marshaling and staging site are all related to offshore wind industry production. The project was announced last June by Gov. Phil Murphy.

Proponents predict the facility, slated to be built in phases starting this year, will support up to $500 million annually in new economic activity and create 1,500 jobs.

In December, Murphy unveiled a $250-million investment at the Paulsboro Marine Terminal in Gloucester County for the largest offshore wind manufacturing facility in US history. It will produce steel components for offshore wind farms off New Jersey’s coast and nationally, while creating more than 500 jobs.

Construction for the facility was supposed to have broken ground last month, with production expected to begin in 2023.

“Simply put, this is the largest investment in offshore wind manufacturing in the United States to date,’’ the governor said.

According to Ørsted, this project will include significant investments into New Jersey’s offshore wind manufacturing capabilities, and comprehensive proposals for the New Jersey Wind Port, including helping to attract suppliers to make use of the facility for Ocean Wind 2 and beyond.

Meanwhile, Public Service Enterprise Group (PSEG) has entered into a definitive agreement with Ørsted to acquire a 25% interest in the Ocean Wind project.

Additionally, Atlantic Shores Offshore Wind (Atlantic Shores), the 50-50 joint venture between EDF Renewables North America and Shell New Energies US LLC, also submitted its proposal to the NJBPU this past December to supply the state with up to 2,300 MW of renewable wind energy.

New Jersey seeks to award between 1,200 MW and 2,400 MW of offshore wind energy projects as part of its second solicitation. Atlantic Shores estimates its first project would be completed as early as 2027.

SNJDC’s other pet project is a longstanding plan to resurrect passenger rail service on an 18-mile current freight line between Glassboro and Camden to connect with existing passenger service to Philadelphia and Trenton.

Mike Renna, SJI’s CEO, says the company is embarking on a massive replacement of 825 miles of pipe over the next five years, atop nearly 400 miles of mains and service lines already upgraded since 2008.

“From a real safety, reliability and resiliency perspective, it makes sense to replace that infrastructure,’’ says Renna, noting the amount of gas leaks from “vintage pipe’’ has dropped substantially in recent years.

“Fortunately, with natural gas prices being so low, we’ve been able to accelerate those replacement programs considerably,’’ Renna continues. “They’ve allowed us to make these infrastructure investments without impacting customers’ bills.”

He adds, “It’s a significant investment on our part. It’s a lot of jobs. … As you’re able to invest in your system, you can extend it to reach more customers.’’

Renna does not view offshore wind power as a threat to his business.

“Gas will be critical for reliability reasons, for affordability reasons. It’s also going to take time to ramp up the renewables,’’ he says. “You’re not going to displace nuclear and natural gas overnight.’’

Natural gas also can be a cleaner form of energy, he says.

“What’s really exciting right now is the potential of de-carbonizing natural gas,” Renna explains, citing, for instance, plans to blend in hydrogen. “I think that’s going to happen on a parallel path to renewable energy generation.”

“Obviously, we spent a tremendous amount of time dealing with COVID,’’ says Dr. John Matsinger, Virtua’s executive vice president and chief operating officer. “But at the same time, we are following our normal processes when it comes to our strategic planning.’’

Virtua is continuing to “address the social determinants of health,’’ says Matsinger, explaining that focus primarily is on food security, transportation to ensure patients make appointments, and behavioral health issues.

To that end, Virtua operates a mobile farmers’ market to get nutritious food to individuals in grocery deserts and hospital food pantries, where doctors can prescribe to patients both visits with dieticians as well as food staples. Virtua also awaits final approval to operate a mobile grocery store.

Coming in 2021 is a birthing center at the Voorhees campus, which will be run by Virtua’s midwife group and other community midwives. In 2022, Virtua plans, along with Penn Medicine, to open South Jersey’s first Proton Therapy Unit for cancer treatment.

Investments also continue at Our Lady of Lourdes Hospital in Camden, says Matsinger, with the goal of making it a “destination site for cardiovascular and neurosciences, as well as transplant medicine.”

Matsinger also says he is proud that South Jersey’s hospitals – typically competitors – have come together to share pandemic information on patient care, protective gear and protocols.

“This isn’t something we should be competing on. This is something we’re collaborating on,” he stresses. “We’re on the phone talking and making sure that everybody is OK. … This isn’t a normal time. We’ve got to work together.’’

SNJDC’s Asselta says the region’s cooperative spirit also is helping keep commerce going amid COVID-related challenges. She marvels, for instance, at growth on Route 47 around Glassboro – watching a new bank, grocery and chain restaurant open despite the pandemic.

“There are pockets of certain industries that are doing well. Architects are busy. Engineers are busy. Construction management firms are busy,’’ Asselta explains.

“It doesn’t mean that they’re not paying attention to a pandemic – they certainly are,’’ she says. “However, they found a way to continue their projects – not at the pace that they were maybe a year ago, but there’s real work being done.’’