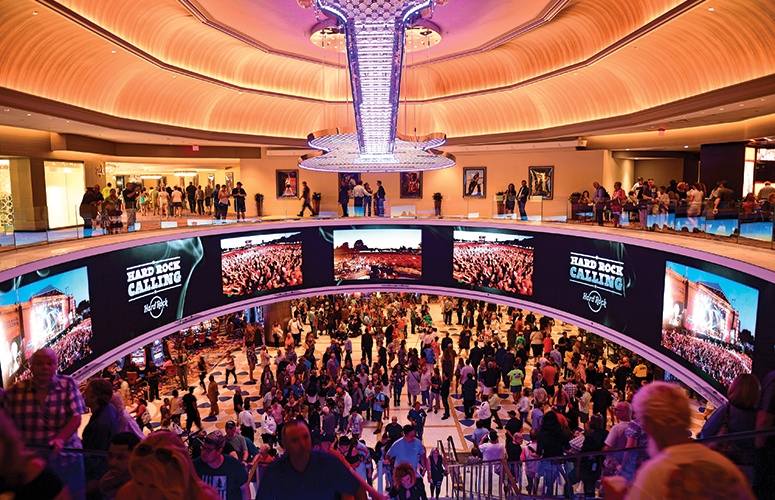 Above: The Hard Rock Hotel and Casino officially opened its doors on June 28 in Atlantic City.

On the back of excitement in AC, optimism flows throughout eight-county region.

Asselta says that the eight-county region that includes Atlantic, Burlington, Camden, Cape May, Cumberland, Gloucester, Ocean and Salem counties, has seen moderate yet steady economic growth over the past year, which, in many ways, mirrors the overall economic growth of New Jersey as a whole.

“The attraction to South Jersey has always been its reasonable cost; land availability; educated workforce; transportation infrastructure; local, county and state business incentives; and quality of life,” Asselta says. “What’s needed, and what we currently have, are professionals working in economic development together with an elected community that is unified, county by county, regionally with federal representatives very connected to their districts. I don’t see that course changing.”

One of the biggest drivers of the South Jersey economy is obvious, and as the area’s most vibrant tourist attraction, Atlantic City continues to fuel optimism and excitement in the region. However, while the shore city continues to strengthen, its growth is contagious, bleeding out to surrounding municipalities that are helping to buoy the area’s economy in their own right.

“I see throughout the eight-county region mid- to small-sized businesses beginning to expand, thus creating more job opportunities leading to a stronger South Jersey economy,” Asselta says. “Colleges and universities in South Jersey play a huge part in economic development, recognizing that the student body needs to be prepared for the jobs that are currently available or will become available as [the region] continues to grow.”

All in on Atlantic City

The legalization of sports betting in New Jersey in mid-June attracted national attention to the state, and particularly to Atlantic City, which remains the second largest gaming market in the US.

At press-time, four Atlantic City casinos officially offer sports betting on their property, including the Borgata, Bally’s and Harrah’s (both owned by Caesars Entertainment) and the newly opened Ocean Resort Casino. Many of the remaining properties are expected to follow suit.

Gov. Phil Murphy said that the move will allow Atlantic City and racetracks throughout the state to attract new business and fans, “boosting their own long-term financial prospects,” as well as contributing to strengthening the economy.

Speaking of Ocean Resort Casino, its opening, coupled with the separate opening of Hard Rock Hotel and Casino, both this past June, have already injected new life into the city.

Hard Rock Hotel and Casino has hired 3,900 workers to date, and boasts 2,000 guestrooms, 150,000 square feet of meeting space, and 119,657 square feet of gaming floor space. The latter includes 2,100 slots, 120 table games, more than 20 restaurants and lounges and entertainment venues such as the Hard Rock Live at Etess Arena (7,000 seating capacity), the beachside Sound Waves and the Howie Mandel Comedy Club.

Ocean Resort Casino currently employs some 3,300 people, and offers 1,399 guestrooms, 130,000 square feet of gaming space, including some 2,000 slot machines, more than 100 table games and eight poker tables. There are also plans to add another 600 rooms at the casino on 12 unfinished floors.

Additionally, the facility has 165,000 square feet of meeting and convention space, as well as a 5,700-seat concert hall with space for potential future expansion. The property has an attached parking structure with 7,700 spaces.

The two new casinos will continue to provide employment opportunities and bolster the area’s tourism market, but they will also contribute to the draw of Atlantic City as a meeting place destination.

“Additional hotel rooms and meeting space will certainly help our meeting and convention business at the new properties. Hard Rock’s brand and entertainment will be a huge draw, along with Ocean Resort Casino’s partnership with the Hyatt Unbound Collection, Topgolf, and unique dining options,” says Sandi Harvey, vice president of sales, Meet AC. “The addition of these new properties increases our total rooms to 17,400 and increased our overall meeting space to 1.8 million square feet. This will allow Meet AC to go after larger conventions and citywide groups.”

Of course, it takes more than just a good geographic location to attract businesses and individuals to hold meetings, conferences or multi-day conventions. Adding unique activities and amenities aside from simply gaming are a focal point among the area’s plethora of properties.

“We host everything from small meetings for 10, to large conferences for 5,000,” says Reina Herschodorfer, director of marketing, national meetings and events marketing, Caesars Entertainment. “When it comes to meetings, social media is playing a big role, along with conference apps. Each event is different because each planner has different objectives. For us, it’s about understanding what the customer is looking for to help them achieve their goals.

“For example, from a food and beverage standpoint, there is now a focus on providing healthy options, and small bites are also very popular,” Herschodorfer continues. “Volunteering is also becoming an important component. It’s been proven that volunteering contributes value to meetings, both to those who volunteer and to the community where the meetings are taking place.”

Continent 8 Technologies, one of the world’s largest online gambling data center and global network solutions providers, recently opened a data center at Ocean Resort Casino in response to the state’s decision to legalize sports betting. The company also has plans to invest more than $5 million to create an independent data center in the underutilized Atlantic City Convention Center.

“The push to become a wired city will open up economic development opportunities for the entire South Shore region,” says Michael Tobin, co-founder and CEO of Continent 8 Technologies. “Atlantic City is rejuvenating and reinventing itself. There are companies that I am quite sure will want to come and run their digital marketing operations here because of the quality of life, the less expensive taxes and the proximity to both Philadelphia and New York City. … We see the building of an independent data center in Atlantic City as a critical part of infrastructure that does not yet exist for any job or company using technology in South Jersey.”

The data center investment also presents an opportunity to achieve a goal that the city has long been striving towards – attracting millennials.

“We’ve been looking for an industry that will help us attract millennials to the Atlantic City market, and I really believe esports is that industry,” says Lauren Moore, executive director of the Atlantic County Economic Alliance (ACEA). “We have a 24/7 economy. We have the hotel rooms, restaurants, attractions and the beach. We have what [millennials] want – we just need to introduce them to Atlantic City.”

Forbes reports that the esports industry’s value is predicted to rise 38 percent in 2018, from $655 million in 2017 to a projected $905 million this year. Revenue estimates are expected to grow to $1.65 billion by 2021, according to Newzoo, an online gaming data provider, with 56 percent of that revenue generating from China and North America.

“What excites me about getting Continent 8 a location in the city is the support industries that will follow,” Moore says. “The production companies, the production facilities, software developers, sponsors, advertisers, promoters and more that support esports will spur economic growth in Atlantic City.”

It is no secret that Governor Murphy has made it a goal to strengthen the state’s economy through the promotion of innovation.

The research park will be located on the campus of the Federal Aviation Administration’s (FAA’s) William J. Hughes Technical Center in Egg Harbor Township. The National ARTP will provide a state-of-the-art, technologically integrated, dynamic environment that promotes modernization and innovation and provides leadership for the future of aviation. Moore says the plan includes the construction of seven buildings totaling more than 400,000 square feet, with the first building – 66,000 square feet – on course to be completed in October.

Moore, who is bullish on the technology park, says he wants to create an aviation center of excellence.

“I want the nation to be able to look at this and say, ‘Wow. They’ve built research and development here; partnered with the FAA; built an air cargo center to bring air cargo directly into the northeast; and trained and developed a workforce for the industry through an aviation academy.”

Healthcare and higher education remain two of the largest sectors that contribute to South Jersey’s economy.

For example, at Rowan University, Joe Cardona, vice president for university relations, says, “There are the pure economics of just operating as a company with a $500 million annual operating budget with 3,600 employees and 19,000 students.

“That translates into Rowan’s economic impact statewide being $1.2 billion annually. That supports more than 9,200 jobs, and generates $19 million in state taxes per year,” he says. “More locally, just our students alone spend more than $1 million in Glassboro stores and restaurants.”

According to Cardona, $1.5 billion has been spent on Rowan University-related construction projects over the past five years and another $1.2 billion is planned for the next five years, including the $400-million mixed-use Rowan Boulevard redevelopment project, which will be completed this month.

From the healthcare side, two ambitious projects reached significant milestones this summer, and are well on their way to making a tangible impact on healthcare in the region.

Jefferson Washington Township Hospital – formerly known as Kennedy Health – held a groundbreaking ceremony in May for an ambitious, $250-million expansion project. The first phase includes an eight-level parking garage consisting of more than 800 spaces and is expected to be finished in spring 2019. The second phase will include a seven-floor patient tower that will launch next March, with an anticipated completion in spring 2021.

The $350-million project would be only the second hospital constructed in South Jersey in nearly 45 years. The hospital is located just east of the intersection of Route 322 and Route 55, adjacent to the West Campus of Rowan University. Its proximity to Rowan University will provide many opportunities for research and education within and beyond the health sciences.

John DiAngelo, president and CEO of Inspira Health Network, believes the hospital will be a significant game changer for the area.

“Inspira Medical Center Mullica Hill will ensure that our network will be able to meet the growing and changing healthcare needs of Gloucester County residents by providing high quality care and convenient access for decades to come,” he says.

There is so much more helping to drive the local economy in the bottom half of one of the country’s most densely populated states, such as the renaissance of Camden, the region’s largest city. American Water’s decision to relocate its corporate headquarters to the Camden Waterfront, consolidating its four existing locations to one central hub in the city, will be another boon for region. The five-story, 220-square-foot building, is part of the Camden Waterfront project developed by Liberty Property Trust.

As innovation remains a statewide initiative and Atlantic City continues to strengthen and diversify, the region as a whole will continue to benefit – attracting more businesses with unique projects to the area. It is certainly an exciting time to be a part of South Jersey.