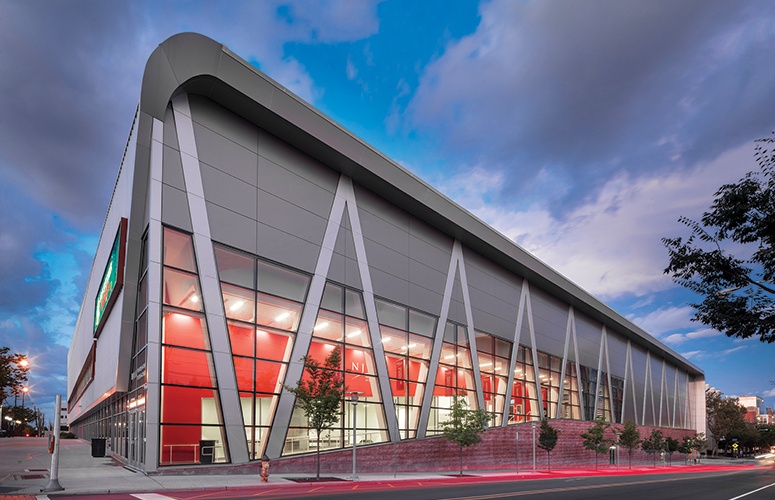 Torcon marked final construction of NJIT’s 220,000-square-foot Wellness and Events Center (WEC), which was completed this summer, with the opening of a new soccer and lacrosse field.
Real Estate

A sampling of Garden State companies that made this year’s Engineering News-Record’s (ENR) ‘Top 400 Contractors’ listing reveals projects that benefit all sectors of the economy.

According to Engineering News-Record’s (ENR) most current “Top 400 Contractors” listing, as a group, the top 400 contractors in the US generated a record $405 billion in global contracting revenue in 2018, a significant increase of 8.3% from the 2017 total of $373.98 billion. Contracting revenue from US projects rose a healthy 9.1%, to $369.15 billion over last year’s mark of $338.43 billion. That points to a trend that is alive and well and prospering here in New Jersey.

Experts generally agree that nationwide, “the tide” of the commercial construction industry over the years has had its ebbs and flows, while New Jersey is seeing a positive flow of projects, revenues and job creation.

In its sixth decade in business, Red Bank-based Torcon remains one of the most active construction management firms in the entire mid-Atlantic region, as well as consistently included among the top commercial builders in the nation and New Jersey.

Torcon Senior Vice President Steven G. Mauer points out that New Jersey’s economy is robust, since there is always a broad range of work in the state, including corporate office, hospital/healthcare, and college/university projects, as well as multi-unit residential construction. The Garden State’s healthy (construction) economy is further evidenced by Torcon’s forecast of additional work exceeding $1.1 billion. Another important trend driving the market is Public-Private Partnerships (P3). They are being used increasingly for college residential facilities, and for other projects as well. 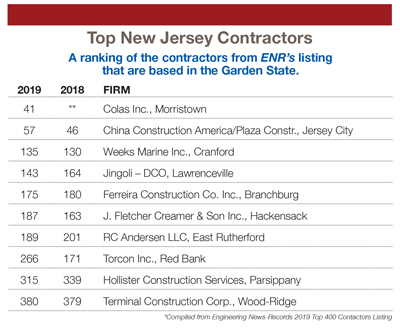 Recently, Torcon marked final construction of NJIT’s Wellness and Events Center (WEC), which was completed this summer, with the opening of a new soccer and lacrosse field.

Early construction activities have just begun on The Valley Hospital’s new 372-bed, 900,00-square-foot healthcare facility in Paramus. The new facility will be built with single-patient rooms, which research shows results in shorter lengths of stay for patients, fewer sleep disturbances and lower rates of hospital-acquired infections.

Well-renowned in New Jersey as well as nationwide, and always a familiar site on ENR’s coveted “Top 400 Contractors” list, is J. Fletcher Creamer & Son, Inc. (Creamer). Each and every year, since 1988, Creamer has been an ENR Top 400 Contractor. Established in 1923, fifth-generation family members participate in the business, as it continues to reach new marks for revenue each year. The company is led by CEO J. Fletcher Creamer Jr., Vice President Dale A. Creamer and President Joseph T. Walsh. Based in Hackensack, Creamer maintains four additional offices in New Jersey, as well as others in Maryland and New York. Annual revenues have surpassed a half-billion dollars.

In addition to countless bridge and heavy road construction projects, Creamer has completed numerous sign structure projects on the Garden State Parkway and the New Jersey Turnpike, as well as for the Departments of Transportation of Maryland, New Jersey and Delaware. Creamer has also been responsible for hundreds-of-thousands of feet of new gas mains for PSE&G; water main projects for water companies in New Jersey, Maryland, Pennsylvania and New York; and numerous major underground electric transmission mains.

Cranford-based Weeks Marine Inc. was formed in 1919 by Francis H. and Richard B. Weeks. Started with just two floating cranes in the Port of New York, handling bunker coal and dry ballast the company now reports hundreds of millions in annual revenues.

A monumental $128-million project most recently completed was a collaboration with The U.S. Army Corps of Engineers (USACE), which recently completed sand placement for the Manasquan Inlet to Barnegat Inlet (northern Ocean County) Coastal Storm Risk Management Project, which was completed in July. Minor work on sand fencing and dune crossovers continued for part of the summer and dune grass planting will resume in certain sections in late/early winter. The project is a partnership between USACE and the state of New Jersey. It is designed to reduce damages to physical infrastructure from the future coastal storms that will impact northern Ocean County and safeguard our shores against them.

These companies and the projects mentioned are just a small sampling of the dedicated work all New Jersey-based contractors are undertaking in helping all sectors of the state’s economy operate more efficiently and safely.