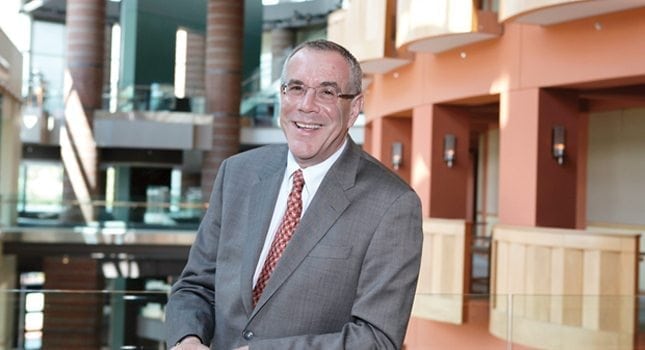 The throng of young adults bustling across Newark’s Center Street to see or audition for the new season of “America’s Got Talent” is becoming a typical scene at the New Jersey Performing Arts Center (NJPAC). The name of the game at the center is to deliver the attractions that sell tickets while adhering to the facility’s longtime mission of performing arts education to New Jersey youth, most of whom come from economically disadvantaged homes.

For John Schreiber, who enters his third year as president and CEO of NJPAC this month, the challenge of running the center is balancing this mix of “mission and commerciality.”

“We serve 60,000 students per year through performances, residencies and training. All of this is money out, so we have to balance this with commercial presentations that are going to pay the rent,” he says. Since Schreiber has come on board, the arts center has increased events by 30 percent these past two seasons.

He comments that the NJPAC audience and market is “diverse, sophisticated and discriminating. Because of that, we have to be at the top of our game in order to be top of mind with our customers. Show business is risky and we practice our craft in a very unforgiving environment.”

If anyone has the experience to put on show, or produce a movie or television program for that matter, it’s Schreiber. Prior to joining NJPAC, he was vice president of Participant Media. The Los Angeles company produced socially conscious films as “An Inconvenient Truth” and “Waiting for Superman.”

Prior to that, Schreiber served as president of George Wein’s Festival Productions. For 19 years, he produced and curated thousands of top-name jazz events, including the Newport Jazz and Folk Festivals and the JVC Jazz Festivals.

As for television and theater credits, he won both an Emmy and a Tony award for producing “Elaine Stritch at Liberty,” which was a hit on Broadway and later turned into an HBO documentary.

“I have been lucky in my career because I have been able to produce across a variety of genres and platforms. Everything I have done has been directed either towards a singular audience or a crossover audience,” he explains.

Schreiber says he loves diverse audiences and that is what attracted him to NJPAC. “Some of my happiest nights are when we look out into the audience and there is a true cross section of the community looking back at us.”

His most satisfying accomplishment at NJPAC to date is the increase in broadcast television activity with networks such as NBC, PBS, HBO, BET, NJTV and now Comedy Central using the facility to tape shows and programs. In addition, NJPAC plans to develop its own broadcast installation to attract more networks and create in-house distance learning programs.

Of all his experiences, Schreiber is new to the game of real estate development. This is a trade he is learning hands on with the One Theater Square residential and retail development being built adjacent to NJPAC. Ground is expected to be broken soon on this project that will consist of a 21-story mixed-used residential tower (244 residential units) being built in conjunction with Dranoff Properties on 1.2 acres. “I’m loving this,” he says of this experience. “I am learning how real estate development can be transformative in a community. Working at Carnegie Hall wouldn’t be as interesting for me because there is not a lot than can be done around that neighborhood as far as development. But here in Newark, when someone builds a residential tower and creates new retail … it is pioneering … it’s homesteading.”

Of his NJPAC predecessor Larry Goldman (the arts center’s founding president and CEO), Schreiber says, “This extraordinary place would not exist without Larry’s persistence, creativity and superb eye for beauty and excellence. He is a visionary. What I have learned from him is his ‘stick-to-it-tiveness,’ … his ‘Never give up, never give in’ attitude.”

NJPAC operates on a $38-million budget, 60 percent of which is raised by earned revenues and 40 percent by fundraising. These past few years, fundraising has been averaging $9-$10 million per year. “That’s a good thing,” says Schreiber, “but I don’t take it for granted.”