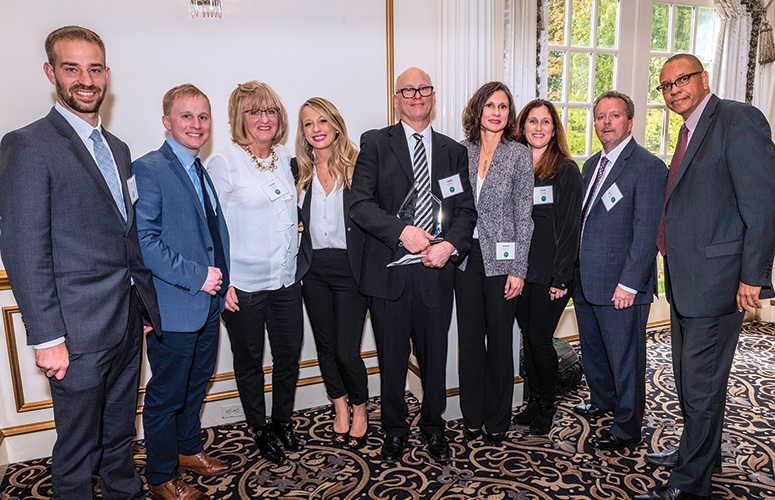 Twelve multi-generational family businesses were honored recently by the Rothman Institute of Innovation and Entrepreneurship at Fairleigh Dickinson University during the institution’s 26th annual New Jersey Family Business of the Year Awards. The event, held at the Crystal Plaza in Livingston, recognized the significant contributions to the economy and community made by those businesses and families.

According to Master of Ceremonies Sally Glick, principal and chief growth strategist at the accounting firm Sobel & Co., the New Jersey Family Business of the Year Awards program, throughout its entire 26-year history, has nominated and recognized 1,071 companies, honored 250 semi-finalists, 130 finalists and 54 category winners, and generated event proceeds that are applied toward entrepreneurial scholarships at Fairleigh Dickinson University ($150,000 has been raised toward the scholarship fund).

Dale Caldwell, Ed.D., the new executive director of the Rothman Institute at Fairleigh Dickinson University, said, “The Institute has been the leading center in helping family businesses solve challenging issues for more than 26 years. Our mission is to promote, support and research entrepreneurship, with a special focus on family businesses and veterans.”

Barth’s Market is a fourth-generation butcher and market that began in 1940 in Irvington as Barth’s Pork Store. Otto Barth Sr. and his wife Emily moved the store to New Providence in 1961, where it remains today. In the mid-1970s, Otto Jr. and his wife Nancy took over the store, and in 1993, Otto’s son Jimmy bought the business with his wife Sandy. Jimmy modernized the business and changed the name to Barth’s Market. He has since been joined by his two children, Paige and Max. The Market balances tradition and innovation. For example, Jimmy has state-of-the-art equipment, but still uses 70-year-old family recipes when creating his meats. ln 2012, he began the dramatic expansion of the store and celebrated its grand reopening in 2011. Barth’s Market now offers high quality meats, healthy options, prepared dinners, baked goods, groceries and produce. One of the many things that makes Barth’s Market unique is that it treats all of its employees like family.

Parkway Plastics, a third-generation company, was founded in 1951 by Edward W. Rowan Sr. when he saw the opportunity of using plastic to create containers. He was an early adopter and innovator of injection molding technology. His son, Edward Rowan Jr., joined the company, bringing in financial and organizational processes to help make it financially sound. He took over Parkway Plastics in the 1970s and was followed by his children, Ned Rowan and Kirstin Kelly, around 2009. This leadership change saw the implementation of a strict inventory control system, competitive quoting procedures, and a tremendous capital investment to replace machinery. Ned and Kirstin have learned that leadership and sound financial practices and controls are key factors for a successful family business. The Rowans certainly give back. ln honor of their mother, Mary Rowan, the company participates in the annual Cancer Walk and continues to contribute to the American Cancer Society, National SBA, Piscataway PBA Local and the Domestic Violence Crisis Center.

Seniors in Place was founded in 2001 by Richard Blecker, with the help of his three adult children, Mia, Chad and Adam, who joined the company between 2007-2009. After seeing Richard’s mother battle a serious illness that eventually took her life, the family was inspired to leave their careers and begin a family business in which certified care givers are provided to those in need. The Blecker family wants to have a positive impact on others who are going through similar difficult times, as navigating the healthcare system can be complicated and impersonal. Seniors in Place is aware of the needs of its patients and families, so caregivers are available around the clock. The future for Seniors in Place is focused on improving the home care industry. ln addition to the dedication to their patients, the Blecker family is generous in their philanthropy by supporting ALS, Lupus, The American Cancer Society, the Make a Wish Foundation and other organizations.

All in the Family Dental Care

All in the Family Dental Care is a fourth-generation dental practice founded in Asbury Park by John G. Campi, DDS, in 1933. John’s son, Dr. Tom Campi, entered the business in 1969 and, together, they built the Wall professional building, remaining on the technological cutting edge. Dr. Tom Campi partnered with his nephew Dr. Jack Campi in 1992 and they continued to pioneer dental technologies. Dr. Joe Campi joined the practice in 1998 and became a partner with his brother Jack in 2002. The office was then completely renovated and the practice added a 3D cone beam imaging system and an in-office same day permanent crown delivery system. Jack’s daughter Erin, a dental hygienist, joined the practice in 2017. Joe and Jack’s wives serve as the practice administrators. Giving back is as important as staying technologically innovative, according to the family. John founded the Boys and Girls Club of Asbury Park in 1933 and the family continues to give back to the community today.

The Cloverleaf Tavern is the oldest business in Caldwell, being founded by George Dorchak Jr. in 1933. It began as a “man’s bar,” which meant that no man under 21 years old and no women were allowed. When George’s son, Richard, joined the business in 1972, he did so with the vision of developing the Cloverleaf into a family-oriented restaurant. This became a reality in 1975 with the opening of the first dining room. Richard wore many hats over the years, as cook, server and bartender, and he watched the Cloverleaf grow to accommodate 75 guests. ln 1993, George’s grandson joined as the third generation to assist in running the operation. Today, the Cloverleaf has the capacity to serve 200 guests and boasts a private party room seating 50. The family is deeply committed to the community and supports the fire department and fire victims, Relay for Life, and local schools.

Suzi’s Sweet Shoppe was the fulfillment of a dream for Susan Hordych, who worked in a candy store as soon as she was old enough and even met her husband Stan as they both worked in the store. Though life took them on different career paths, Suzi continued to feed her passion of homemade chocolates. When her husband suggested she make a basket for him to sell at work, she decided to give it a try and the rest is history. Since opening its doors in 1998, the business has expanded and purchased new equipment, but all chocolates are still hand-dipped. Suzi and her husband appreciate the efforts of their employees and their contribution to the shops’ success. Employees say they feel like they are working for their own family. The Hordychs are well known for donating their baskets to fundraisers, school events and families going through hard times. The family does its best to align the company’s charitable activities with those of their employees.