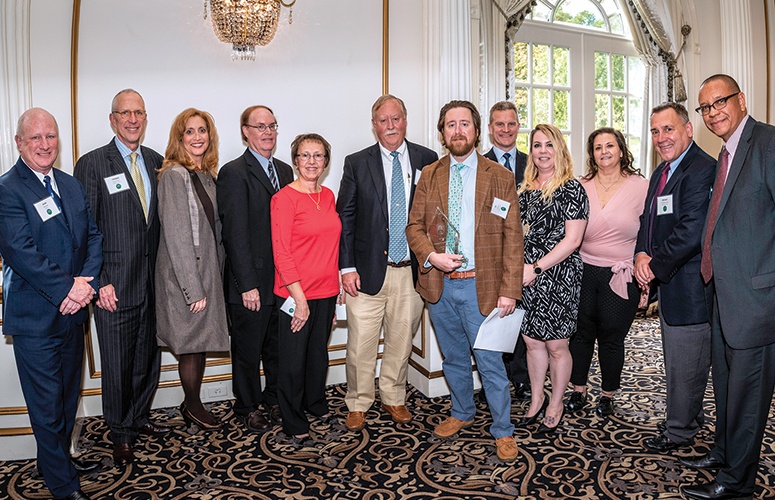 Twelve multi-generational family businesses were honored recently by the Rothman Institute of Innovation and Entrepreneurship at Fairleigh Dickinson University during the institution’s 26th annual New Jersey Family Business of the Year Awards. The event, held at the Crystal Plaza in Livingston, recognized the significant contributions to the economy and community made by those businesses and families.

According to Master of Ceremonies Sally Glick, principal and chief growth strategist at the accounting firm Sobel & Co., the New Jersey Family Business of the Year Awards program, throughout its entire 26-year history, has nominated and recognized 1,071 companies, honored 250 semi-finalists, 130 finalists and 54 category winners, and generated event proceeds that are applied toward entrepreneurial scholarships at Fairleigh Dickinson University ($150,000 has been raised toward the scholarship fund).

Dale Caldwell, Ed.D., the new executive director of the Rothman Institute at Fairleigh Dickinson University, said, “The Institute has been the leading center in helping family businesses solve challenging issues for more than 26 years. Our mission is to promote, support and research entrepreneurship, with a special focus on family businesses and veterans.”

Tingley Rubber traces its roots to 1896 when Charles O. Tingley invented the bicycle tire plug to repair flat tires. To sell his product, he rode his bicycle from Rahway, Union County, north to New England, west to Buffalo, and south to Pennsylvania. His bike journey brought him to customers and demonstrated the need for his product. ln 1911, Charles’ son-in-law, William McCollum, Sr., joined the business, which soon added automobile blow-out patches to the product line. ln 1929, McCollum bought the Reliance Rubber Company, which manufactured plumbing supplies and other molded rubber products. William McCollum Jr. joined the company in 1937 and began designing and manufacturing men’s rubber overshoes – still one of the company’s most popular products. Bill Jr.’s younger brother, Jim, joined the company in 1950 and eventually succeeded Bill as chairman. The company continues to grow with fourth generation and current chairman Bruce McCollum, and fifth generation J.B. McCollum at the helm. After 122 years, Tingley is a world leader in protective apparel and footwear.

Alfred Sanzari Enterprises, founded in 1945 by Alfred N. Sanzari, began as a sheet metal subcontracting firm built on self-reliance, hard work, fiscal responsibility and integrity. Seventy-three years later, these practices remain the cornerstone of the company’s philosophy as it has grown into one of New Jersey’s premier real estate developers, owners and managers of commercial, residential and hospitality real estate. Alfred was joined in the business by his two sons Ben, vice president (1967), and David, president/CEO (1972), followed by the third-generation Ryan, COO, in 2011. A key ingredient in the success of the business is its ongoing commitment to enhancing the quality of life for residents in the communities in which the business is active. ln 2013, the company built a public garden dedicated to the city of Hackensack, and supports the Suites on Second Suite project at the Audrey Hepburn Children’s House at the Joseph M. Sanzari Children’s Hospital at Hackensack Meridian Health Hackensack University Medical Center, providing space for families of pediatric patients.

Unique Photo was founded 71 years ago by Bernard Sweetwood and his wife Harriet, as a wholesale photographic supply store. Bernard and Harriet’s sons, Jonathan and Matthew, grew up in the business, eventually taking over after obtaining advanced degrees from Seton Hall University and the University of Pennsylvania. Becoming the largest distributor of Westinghouse flash bulbs, the business was hugely successful and saw film sales explode. As digital photography began to change the marketplace, the Sweetwoods changed their business model, moved to Florham Park and opened a retail outlet. “Unique University” was also introduced to provide photography education and photo excursions. Alexander Sweetwood, a third-generation family member, was named president in 2015. His brother Jack and cousin Zak also hold company positions. Unique Photo supports a variety of charitable organizations such as The Michael J. Fox Foundation, Mt. Pleasant Animal Shelter, and the Boys and Girls Clubs of NJ, and sponsors NJ Monthly magazine’s Cover Photo Contest.

My Limo was founded in 1962 when Philip Gogel returned home disabled from the Korean War with not much more than determination and grit. He began selling spark plugs. The good news was they were easy to sell, so, Gogel was able to continually expand his business. Eventually, he bought a gas station where his sons helped pump gas, change tires and fix cars. ln 1980, when son Howard graduated from college, his father refinanced the building and sold it to him and his brother Stuart. They bought a limousine, rented and washed cars and changed tires. As a result of these services, My Limo was founded in 1983. With disruptors like Uber and Lyft, the company today is committed to differentiating itself with a strong emphasis on the customer experience. Stewart’s three children (third generation), Jason, Coreen and Kevin, currently work at the company. The Gogel family believes in upward mobility for all their employees and promotes from within.

Parker lnterior Plantscapes was founded as a wholesale market in 1948 by Leonard and Beatrice Parker. The couple stayed in the business for 39 years until their sons, Richard and Steven, took over. Steven changed the business into a retail garden center and growing facility. Richard and his wife Vicki have been joined by their son Nathan, who will soon take over the reins. The family business has grown into a far-flung, multi-state enterprise of greenhouses, farms and more. The Parker organization has earned a reputation for hard work and top-quality performance, stepping into assignments when other contractors were unable to complete large or complex installations. Today, Parker stands as the largest privately-owned interior landscape company in the nation. It is unconstrained by horticulture convention and has pioneered many industry firsts, including the successful large commercial use of self-watering systems, customized boxes to hold plants without damaging them, commercial indoor use of large preserved plants, and franchising of the interior Plantscape business.

Spectra Colors Corp. was founded in 1987 when Luis B. Marrero ventured out on his own after working in the pigment and dye manufacturing industry. He saw a niche opportunity to focus on small- to medium-sized clients while providing a high degree of service and customization. Today, the company enjoys a strong reputation for its commitment to quality, service and innovation. Some 11 years ago, Luis’ daughter, Alexis, started her career at Spectra, holding positions in every company department. Alexis’ interest in international business has been integral to company growth since Spectra now derives 30 percent of its revenue from international customers. Luis’ nephew, German Pellot, and niece, Veronica Pellot, are both committed to Spectra and are actively involved in the company. Spectra has experienced difficulties, but its commitment to honesty, employees and clients has gotten it through hard times. When the company was faced with a two-week shutdown due to Hurricane Sandy, its employees came to work ready to do what was necessary to get Spectra up and running again.