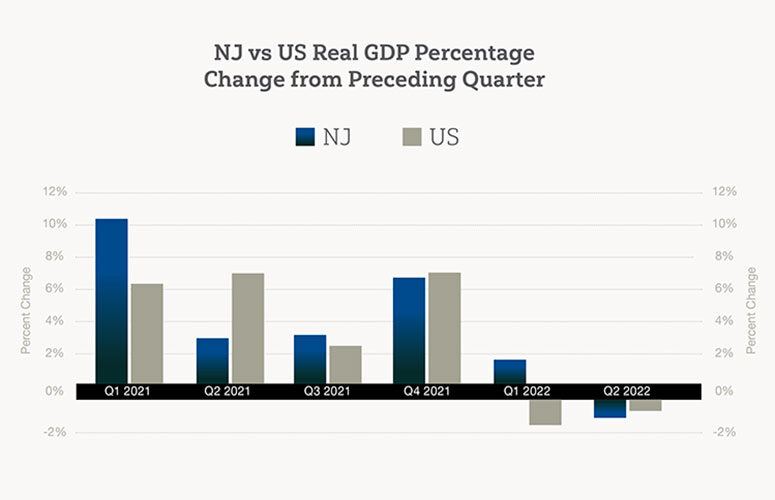 By Kyle Sullender, Executive Director of Focus NJ  On Nov 2, 2022

Despite fears following the release of New Jersey’s first quarter Gross Domestic Product (GDP) data, the state has not yet fallen into a recession based on the most recent data available. This news comes despite the Garden State’s economy shrinking by an annualized rate of 1% in the second quarter of 2022, according to the U.S. Bureau of Economic Analysis (BEA).

GDP is a measure of all goods and services produced by a state (or country). Although there is no formal designation for when a state is in a recession, consecutive quarters of shrinking GDP are commonly recognized as an informal sign of a downturn at the national level.

When data for the first quarter of 2022 was initially released in the spring, New Jersey’s GDP had declined by 2.2% at an annual rate. That decline put New Jersey 33rd in the nation, worse than most states in the region, and set off alarms about a potential recession.

Following a series of revisions made to state-by-state GDP and personal income figures in September, New Jersey’s standing relative to its neighbors looks very different. Those revisions show New Jersey’s GDP growing by 1.7% in the first quarter of 2022, rather than shrinking. That growth far outpaces the revised national rate (-1.6%) and outpaces each state included in the “Mideast” region.

Preliminary figures once again show New Jersey’s GDP contracting, this time by 1% at an annualized rate in the second quarter of 2022, according to the BEA. This was the largest decline in the region, though the District of Columbia, Maryland and Pennsylvania all experienced declines of 0.9%. Delaware and New York grew at 1.2% and 0.7%, respectively.

New Jersey’s decline was primarily driven by falling outputs in construction and nondurable goods manufacturing, which contributed -0.84 percentage points and -1.61 percentage points, respectively, to the state’s overall 1% decline. Construction and nondurable goods manufacturing were also the leading factors in the country’s overall 0.6% decline.

Despite declining output, income in New Jersey grew at an annualized rate of 5.6%, just below the national rate of 5.8%. Regionally, New Jersey income growth in the second quarter of the year ranked near the top of the pack, growing faster than the District of Columbia (3.6%), Pennsylvania (4.3%), and Maryland (4.6%), but slower than New York (7.2%).