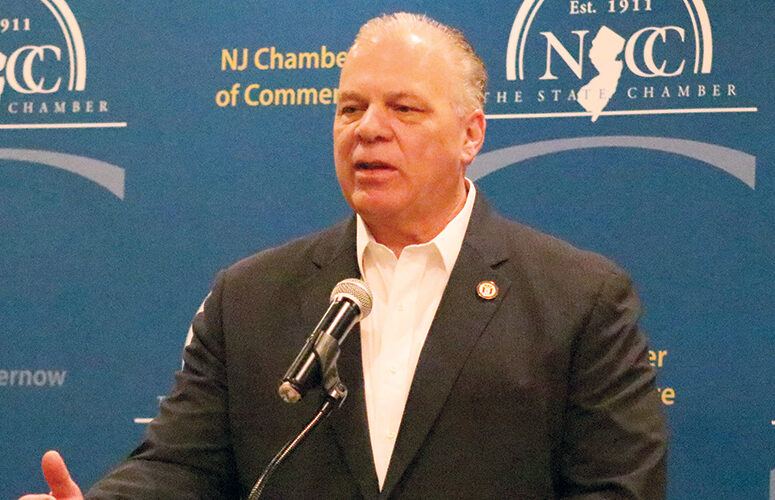 Senate President Stephen Sweeney discusses the Path to Progress initiative at a past Meet the Decision Makers event hosted by the New Jersey Business & Industry Association and the New Jersey Chamber of Commerce.
Government

In April of 2019, Senate President Stephen Sweeney introduced the Path to Progress (PTP) report, spotlighting recommendations put forth by a legislative Economic and Fiscal Policy Workgroup he assembled to reduce taxes and make the state more competitive by reforming its revenue structure.

In the following Q&A, Sweeney provides an update on the achievements made so far in realizing the report’s goals that will hopefully put the state on the “path” to sound fiscal policies.

Q: What progress has been made by the Legislature and with the Murphy administration in implementing the fiscal reforms that were the focus of the Path to Progress report?

A: We have been making major progress on a wide range of initiatives – from pensions and health benefits to school regionalization and asset infrastructure – that are generating billions of dollars in savings and will fundamentally change New Jersey government.

A: The most important thing we needed to do was to start making the full Actuarially Required Contribution on our state pension payment, and we are getting to 100% in the upcoming FY 2022 budget. That’s a year earlier than we expected to get there until the 10-year ramp-up launched under the last administration. Once I realized how strong revenues were coming in, I urged the governor to do it. We will save billions by making the full contribution a year early, just as we are saving $13 billion over 30 years by the legislation we passed requiring quarterly pension payments. We still need to make reforms to our pension system, including implementing a hybrid pension plan for new employees that combines a traditional defined benefit pension on the first $40,000 of income and a 401K-style cash balance account on income above $40,000 that workers can take with them if they leave.

Q: What progress has been made on controlling the cost of health benefits?

A: Lowering the cost of healthcare for public employees is critical, and I am proud that I was able to negotiate a new health benefit package with the New Jersey Education Association that will markedly reduce the costs for districts both in the School Employees Health Benefits Plan and in private plans. We are already banking $2 billion in savings over three years in the state budget from the Pharmacy Benefits Manager program we enacted that uses technology to ensure that we pay the lowest possible cost for prescriptions. This program, which is like an E-Bay for prescription drugs, is being copied by lawmakers in other states.

Q: Can you discuss the details and savings than can be realized in the education reform arena?

A: The core recommendation was to revive the effort to create K-12 regional and countywide school districts in order to improve both the quality and cost-efficiency of education. Small districts with fewer than 500 schoolchildren spend 17% more per pupil than districts with over 1,000 pupils and cannot provide the breadth of educational experience that students in large districts take for granted. The bill I sponsored, S3488, passed the Senate unanimously with support from every major education group, including the NJEA. Regionalization is voluntary, and districts are already lining up by the dozens to take advantage of the state-funded studies and the financial incentives we are providing for districts with declining enrollments that are losing Adjustment Aid.

Q: What progress is being made in achieving shared services in local government?

A: We have been working with the governor’s Shared Services czars, and we have resumed efforts to move my bill, S1, that would revitalize the Local Unit Alignment, Reorganization and Consolidation Commission to push shared services in municipalities that do not have shared services agreements with a potential loss of state aid for those that do not participate. Shared services save money and improve service quality, as the countywide tax assessment and countywide ambulance service I set up as a Gloucester County freeholder director proved.

Q: Can you also comment on the initiatives and cost savings that could come from leveraging assets to stabilize the pension system?

A: We introduced new legislation at the end of March to create the New Jersey Retirement Infrastructure Collagenized Holdings Fund (RICH), which will enable state and local governments to transfer assets into the pension system. This will not only diversify the assets of the pension system and make it less vulnerable to the ups and downs of Wall Street – as the transfer of the state Lottery to the pension fund did – but also provide the financing needed to make improvements to municipal water systems, for example. We could use the legislation to build and operate HOT (high occupancy toll) lanes in New Jersey like those in Maryland and Virginia, which would provide further revenues to the pension system. This effort parallels our push at the federal level for the enactment of a Pension Infrastructure Financing and Improvement Act that would both provide low-cost federal loans to stabilize pension systems and direct some of that money to be used to finance infrastructure improvements that would generate revenue for pension systems across the country.

Q: What are your thoughts on the governor borrowing more than $4 billion to balance the current and previous year’s budget? If all or parts of the PTP were implemented, would the state have needed to borrow the $4 billion?

A: I wish we had waited until January to borrow to see how state revenues were coming in, how much we actually needed to borrow, and what the prospects were for a new round of federal aid from the Biden Administration. In retrospect, as I have said publicly, we didn’t need to borrow at all. Now we have to make sure that the more than $6 billion in federal aid that we will be getting is spent wisely on improvements that will make the state stronger and more competitive, and that we budget responsibly to avoid a huge fiscal cliff in the years ahead when the federal aid runs out.