From the lowest unemployment rates in recorded history in 2019 to the highest in 2020, New Jersey’s workforce experienced a turbulent year. Forget the Great Recession, economists have compared 2020 unemployment to rates likely seen only during the Great Depression. 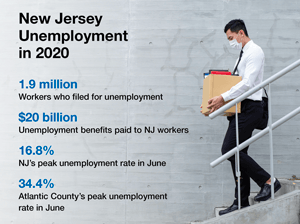 lion workers filed for unemployment from March 21 to Dec. 26 in the Garden State, according to the New Jersey Department of Labor and Workforce Development. To put the severity of New Jersey’s pandemic-induced unemployment into perspective, these numbers equate to 41.5% of New Jersey’s pre-pandemic labor force.

As a result, the state paid out nearly $6.1 billion in New Jersey unemployment insurance benefits. With additional funds authorized by Congress under the CARES Act, but not including individual stimulus checks, eligible New Jersey workers received more than $20 billion in unemployment benefits in 2020.

Not surprising, the pain of unemployment was not felt equally throughout the state in 2020. Some counties suffered disproportionately.

Let’s be clear, even though some counties are seeing their lowest unemployment rates since the onset of the pandemic, the level of joblessness is still nothing to cheer about. Too many New Jersey residents are still without work. Unfortunately, the horrifyingly high unemployment that occurred during the worst months of the pandemic in 2020 has seemingly reset the bar for how we view “low” unemployment numbers.