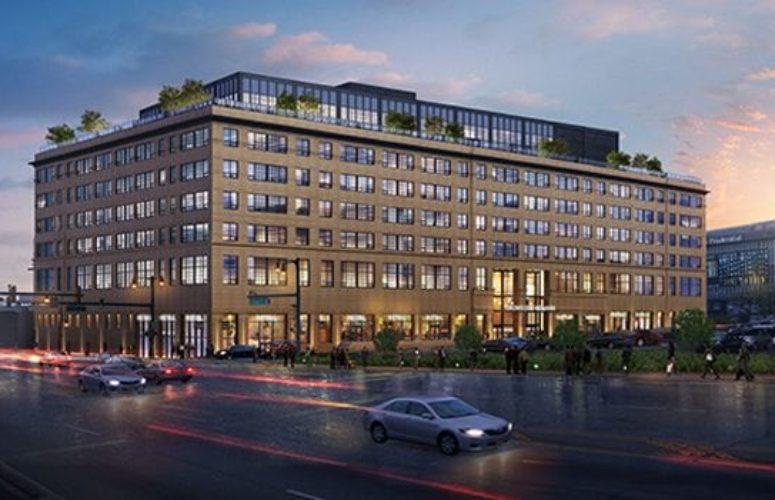 Ironside Newark at 110 Edison Place, situated adjacent to the recently announced Mulberry Commons Park. The former warehouse, redesigned by Perkins Eastman, is being converted at the hands of its owner Edison Properties, to a mixed-use site to include some 456,000 square feet of loft and penthouse offices perched high on the building’s top six floors. It is known to be one of the first spec office developments in decades to take place in downtown Newark.

It was 1969, the year of America’s first moon landing. At that very same time, my father began commuting from Long Valley, New Jersey, to New York City via Gladstone Station. There, each morning at 5:00 a.m., he would board his first of at least two trains, followed later by a bus ride across midtown Manhattan, barely in time to reach the office for work. That commute, in reverse order, would begin once again at 5:00 p.m.

Never mind the Moon, todays millennials would likely think anyone willing to travel what seems like “light years” to work in the morning and back the same evening, must certainly be from Mars!

So it is no wonder that the “race” is skyrocketing to create office “space” in close proximity to urban areas with easy access to transit hubs. Much of this commercial space is also housed in mixed-use developments that include residential space and conveniences such as retail stores and restaurants as well as the professional offices of lawyers, doctors, dentists and accountants, to name just some examples.

“Tenant demand is expected to continue to favor urban locations such as Jersey City and Newark due to transit access and neighborhood amenities. Many corporations believe they will have better luck recruiting millennial talent in a Central Business District setting,” says Mark Russo, research manager with Newmark Grubb Knight Frank (NGKF).

A pioneering example of this “race for space” to meet soaring demands is Ironside Newark at 110 Edison Place, situated adjacent to the recently announced Mulberry Commons Park. The former warehouse, redesigned by Perkins Eastman, is now being converted at the hands of its owner, Edison Properties, to a mixed-use site to include some 456,000 square feet of loft and penthouse offices perched high on the building’s top six floors. It is known to be one of the first spec office developments in decades to take place in downtown Newark. NGKF is serving as exclusive leasing agent of Ironside’s enormous amount of modern and strategically-located office space.

“At 110 Edison – a.k.a. Ironside Newark – we have seen a lot of interest from suburban companies that want the connectivity, amenities and access to the young labor force of a downtown, but at a discount to the Hudson Waterfront that is still easily accessible by car,” Tim Greiner, executive managing director of NGKF points out.

“Edison has chosen to redevelop an existing warehouse into loft-style tech office space as its first redevelopment around Mulberry Commons because it highlights the new aesthetic that ‘forward companies’ are seeking,” Greiner says.

Along those lines, in this case Newark’s rail line, Berger Organization has added 33 Washington Street to its already impressive portfolio, which now encompasses more than 2 million square feet of office space alone. The beacon-like, 18-story office tower showcases a breathtaking granite lobby, and was originally built for Horizon Blue Cross/Blue Shield. It is now ideally located to accommodate multiple corporate tenants that include the region’s leading companies. It is positioned just two blocks from the Newark Broad Street light rail and a half a mile from Newark Penn Station. Views of Manhattan are seen from the upper floors and may be visited in roughly 20 minutes by train, traveling on service provided directly from Newark Penn Station to New York City.

33 Washington, originally completed in 1970, sits on 1.6 acres in close proximity to Washington Park, at the north side of Newark’s Central Business District. It features an additional unique commodity known as on-site parking, allowing car travel from all major highways connected directly to the city for those traveling from areas not yet accessible by mass transit.

“We are excited to add this iconic building to our portfolio,” says Miles Berger, chairman and CEO of Berger Organization. “The demand for high-quality office space in the city continues to grow, and 33 Washington’s excellent location and amenities make it a highly attractive address.”

Along the Hudson River, in neighboring Jersey City, often referred to as Manhattan’s “Sixth Borough,” these present, emerging and future trends are evident more now than ever.

Mack-Cali is a leading role model helping shape the theme of future development here on the Hudson Waterfront, symbolized glaringly by its Jersey City’s Harborside, the waterfront’s so called “city within a city,” featuring six state-of-the-art Class A office buildings accounting for a staggering total of 4.3 million square feet. Its adjoining neighbors are comprised of retail shops, restaurants, a full-service Hyatt Regency hotel, and multiple luxury apartments featuring breathtaking views of the Manhattan skyline. It is all in a world-class business epicenter boasting unrivaled transportation access to a multitude of nearby hubs benefiting its corporate residents.

On the Hudson River Waterfront, where Mack-Cali principals feel the market is the most robust, the company anticipates a substantial “rollup” in rent at today’s market levels versus expiring rent.

“The first quarter was a workmanlike quarter where we continued to execute on our plan of leasing our key markets and locations. The market remained steady from a demand perspective with ongoing showings and interest throughout the portfolio, with growing interest in our waterfront properties,” says Michael DeMarco, Mack-Cali CEO.

There are very few mixed emotions when it comes to mixed-developments and their highly sought after locations. “The office market has improved a bit in certain areas such as Metro Park in Iselin. Waterfront areas such as Weehawken, Hoboken and Jersey City remain strong and vibrant, as do certain downtown areas near train stations,” according to David Zimmel, CEO of Zimmel Associates.

Following these observations by some top industry experts, it will come as no surprise that two of the largest lease deals in the region took place in in the urban submarkets of Newark and Jersey City.

In Newark, Broadridge Financial Solutions, a spinoff of Automatic Data Processing (ADP), which provides technology solutions to the financial services industry, leased 160,070 square feet at 2 Gateway Center. Currently located at 2 Journal Square Plaza in Jersey City, Broadridge has received a 10-year, $23.4-million Grow NJ award after agreeing to the move, which will, in turn, bring 1,000 jobs to Newark. The leasing activity was offset by new listings at 2 Gateway Center, 550 Broad Street and 1100 Raymond Boulevard, resulting in a quarter-over-quarter increase in availability from 20.9 percent to 21.0 percent for Newark.

On that front, NGKF’s Mark Russo adds, “The Grow NJ program has been an essential component of recent leasing, and I am optimistic that the program will stay mostly intact and continue to attract and retain office jobs and companies.”

In Jersey City, Tory Burch, a fashion/apparel company leased 93,720 square feet at 499 Washington Boulevard in Newport. The tenant is currently based in Manhattan’s Chelsea neighborhood and will now have a major presence near “Wall Street West.”

Forward momentum in Northern New Jersey slowed in the first quarter of 2017 as net absorption totaled negative 504,511 square feet – the highest negative absorption total in three-plus-years. Further exacerbating negative absorption was the return of many large blocks of space to the market. These new blocks, accompanied with a lull in leasing activity, pushed the availability rate 30 basis points higher than the previous quarter, to 21.3 percent.

In comparison to its northern counterpart, Central New Jersey experienced somewhat less of an impact, with 168,129 square feet of negative net absorption in the first quarter. Directly responsible for these results were several mid-sized transactions in the Somerset/Route 78 submarket, which helped keep net absorption further in the red. However, the pharmaceutical industry, which accounted for 34 percent of activity, drove demand, particularly in the Princeton submarket, which accounted for all six pharmaceutical transactions in the region.

“I do not see anything that causes me to think those areas will turn around anytime soon. There are deals being made, for instance, companies that move when their lease is up in order to take advantage of tenant improvement packages, but there is not much positive absorption overall,” Zimmel says.

All of that taken into account, while transit-hub submarkets swallowed up demand in the first quarter of 2017, it was the financial and pharmaceutical industries that were responsible for a bulk of leasing activity so far this year, comprising approximately 28 percent of all lease activity throughout the central and northern regions of the Garden State.

“There appears to be renewed interest among municipal officials to partner with reputable developers to help transform their communities. There also remains strong interest by medical, pharmaceutical, nutrition, personal hygiene, cosmetic and technology companies to locate here as evidenced by recent deals that have been signed,” declares NAIOP’s McGuinness.

A number of major industry-leading companies that exemplify the aforementioned categories, which have for a multitude of reasons made New Jersey their home, or in some cases their home-away-from-home, are Unilever in Englewood Cliffs, Daiichi Sankyo in Basking Ridge, Summit Medical Group MD Anderson Cancer Center in Florham Park, and iCIMS in Holmdel, to name just some shining examples.

“There is still strong demand for the right kind of suburban product, centrally-located with on-site amenities. For example, the largest lease of 2016 was Allergan’s 431,495-square-foot commitment to 5 Giralda Farms in Madison,” according to Russo of NGKF.

That demand is perhaps evidenced by the high availability rate which is beginning to shrink as antiquated and outdated office buildings continue to vanish from inventory during their redevelopment process. Currently, there are more than 3.9 million square feet of recent and planned office building demolition and adaptive reuse projects taking place in the region, which is helping to lower an availability rate that has consecutively topped an average of 20 percent the past five years. These “starting over” and adaptive reuse projects are joined by many major renovations to existing sites, primarily to add modern amenities like dining options as well as exercise facilities, to name a few.

For instance, Mountain Development’s 56 Livingston Avenue in Roseland is an impressive example of a suburban property that has worked hard to stay competitive. After undergoing a $50-million upgrade project, including the addition of a full-service cafeteria, fitness center and conference area, the once-vacant property is now 82.3 percent leased by tenants such as Connell Foley, Lowenstein Sandler and Brown & Brown.

In a bold attempt to exhibit a similar theme to that of the aforementioned urban areas that seems to be paying off, “Bell Works,” the rebranded and redeveloped 2-million-square-foot (former Bell Labs) building in Holmdel, will be seeing an added 75,000 square feet of retail space and a 250-room hotel to help to create a mixed-use urban environment in the Parkway Corridor. The property has seen 514,445 square feet of leasing activity since its renovation, including major leases with iCIMs, WorkWave and Jersey Central Power & Light.

In summary, it is an undisputed fact that the younger generation of workers is most certainly redefining how the “space race” is being waged, and most predominantly in urban areas. Conversely, it appears other regions in the state still have many horses of their own in the race. That said, many of these horses are being lead to the waterfront, where it appears the millennial workforce has steadfastly “hitched its post.”