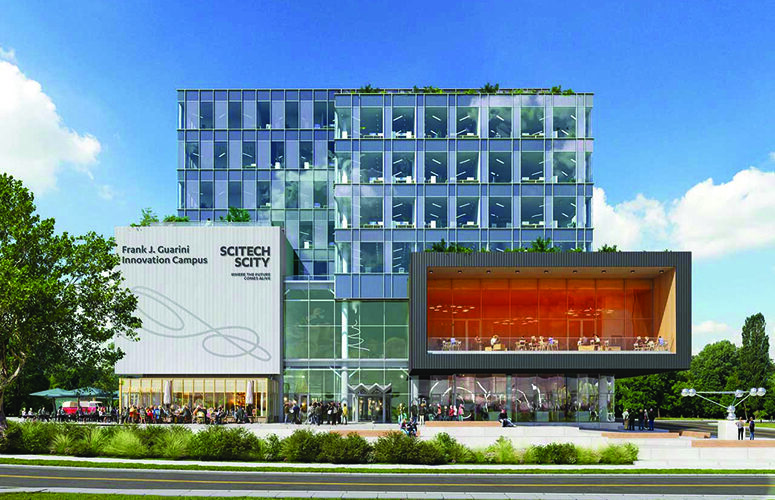 Garden State cities are lightning rods for innovation, maintaining the state’s history of being on the cutting edge of technology.

New Jersey has a long tradition of innovation and technological entrepreneurship. From Thomas Edison’s record 1,093 patents including the lightbulb and phonograph, to the cutting edge work at Nokia Bell Labs, throughout history the Garden State has attracted and fostered a high-tech environment that is unique across the country – perhaps only rivaled by that of Silicon Valley today.

There are myriad reasons for New Jersey’s success in this sphere, notably its advantageous physical location nearby several of the country’s biggest cities and its accessible transportation infrastructure including Newark Liberty International Airport.

The state ranks No. 1 in the country for broadband access, according to BroadbandNow.com, and 68% of New Jersey residents have access to fiber optic service. Additionally, Northern New Jersey has 2.14 million square feet of data center space – one of the world’s largest concentrations.

New Jersey is also a rising hotbed for venture capital (VC) investment, as New Jersey now ranks 9th in the nation based on VC dollars invested per state.

“We’re very encouraged to see the VC community invest in New Jersey startups on a scale we haven’t seen in decades,” Gov. Phil Murphy says. “It’s well known that New Jersey is the birthplace of innovation, but investors are clearly showing that our state is the future of innovation as well.”

Fostering Innovation for the Future

It is an exciting time for high-tech innovation in New Jersey. Two projects in particular showcase the state’s prowess in this regard, including the New Jersey Innovation and Technology Hub (HUB), a $665 million, 550,000-square-foot development in New Brunswick, which recently broke ground and will aim to nurture the growth of startup companies and new technologies in a range of industries. Its impact will extend far beyond New Jersey’s borders.

Princeton University, Rutgers University, Hackensack Meridian Health and RWJBarnabas Health will serve as core tenants at the site, which is expected to open in 2024, and is estimated to create some 2,000 permanent jobs and 1,200 construction jobs.

According to Mayor James Cahill, when combined with other projects, New Brunswick is reaching a total investment of $1.7 billion in 1.3 million square feet of space.

“The HUB firmly establishes New Brunswick as an epicenter of innovation, technology, research and business incubation and will position the city as a leader in meeting the future demands in these [various] fields that impact so much that affects everyday life,” Cahill says.

In a similar vein, Jersey City-based Liberty Science Center (LSC) recently broke ground on its $300-million first phase of SciTech Scity, a 30-acre innovation campus. Described as a “city of tomorrow,” SciTech Scity aims to be a place where companies and researchers test – and residents and visitors experience – new high-tech products and services before they come to market. It is expected to open in late 2023 and 2024.

“We are building a business optimizer that’s a new breed of innovation center that is going to maximize commercial success and social impact,” says Paul Hoffman, LSC president and CEO. “We want to jumpstart the creation of early stage science and technology companies, that if they are successful, will radically change the world. What is wonderful about an incubator, if you look at the statistics, is that 70% of companies that make it out of an incubator set up shop within five miles of where they were birthed. That should bring a lot of jobs here to Jersey City and New Jersey.”

In fact, Newark was selected as the location for the new HAX program site and US headquarters through a competitive nationwide search.

“New Jersey has a long history as the birthplace of industries,” says SOSV Founder and Managing Partner Sean O’Sullivan.

He cited several factors that attracted SOSV to Newark, including the aforementioned transportation infrastructure; access to a talent pipeline fed by New Jersey’s world-class colleges and universities; the city’s high-quality internet infrastructure, which includes 26 miles of underground municipal fiber; innovation-focused programs introduced by the Murphy administration; and the growing venture capital ecosystem.

Finally, this past year saw the return of the Propelify innovation festival to the Hoboken waterfront. The event, which celebrates innovation and entrepreneurship, gives attendees a unique opportunity to connect, learn and grow their businesses.

Propelify Founder and TechUnited CEO Aaron Price says Propelify’s mission is to surround the community with the resources needed to support the entire innovation lifecycle. Connecting innovators with investors, this ultimate tech networking festival can be a key cog in New Jersey’s mission to foster a glowing innovation economy.

Between events like Propelify and developments such as those seen in New Brunswick, Newark, Jersey City, and other high-tech hubs such as Camden, Princeton and more, there is a tangible buzz and excitement surrounding the innovation community in the state.

While its cities may not be household names like New York, Boston or San Francisco, the innovations that come out of the Garden State are likely to be far reaching. And if the past is any indication, these innovations may even have the capacity to light up the world.