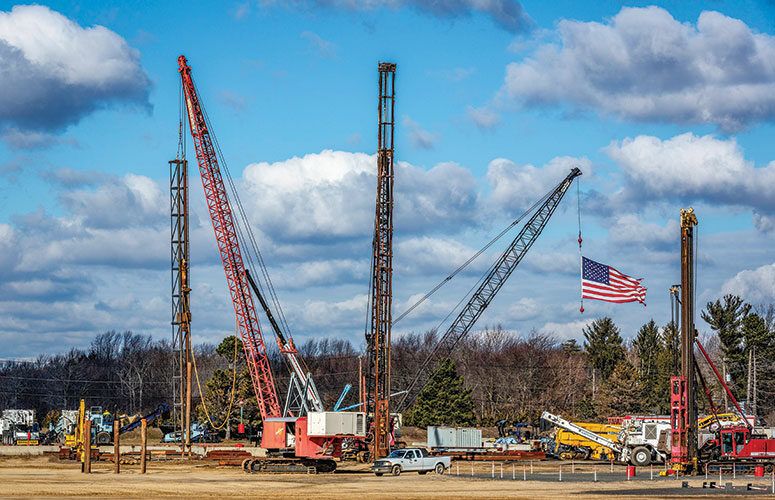 An array of heavy equipment is used to train apprentices and current members of International Union of Operating Engineers (IUOE) Local 825.
Infrastructure

Notable institutional and infrastructure projects are underway in all corners of the state, and construction trade unions are paving the way for their success.

While New Jersey is replete with infrastructure projects such as the Portal North Bridge’s replacement in Kearny and the planned Hudson Tunnel Project that will facilitate mass transit between New York and New Jersey, institutional construction is also afoot in the state, especially within the healthcare and higher education spheres. Construction trade unions are at the core of these institutional and infrastructure projects’ success, contributing to the betterment of both the Garden State’s economic well-being and its overall landscape.

In the healthcare realm, it’s no secret that the state’s 72 acute care hospitals often compete amongst themselves for patients, that healthcare technology is rapidly evolving, and that the state’s Department of Human Services estimates that by 2029, nearly 3 million New Jerseyans will be over the age of 60 and thus require more medical care (by comparison, there were only 2 million state residents who were over the age of 60 in 2019).

“There’s hospital construction everywhere,” explains Greg Lalevee, business manager at Springfield-based International Union of Operating Engineers (IUOE) Local 825. He also says, “I think … the [pandemic] events of the last two years have shown the need to have a strong and robust healthcare system.”

Citing an increased demand for emergency medical and trauma services over the past few years, Morristown Medical Center is expanding and modernizing its emergency department with an estimated price tag of $26.9 million and expected 2024 completion.

Construction is additionally underway at higher education institutions, even in the face of National Student Clearinghouse Research Center’s statistics that show a nationwide 7.4% decline in undergraduates between spring 2020 and spring 2022.

However, Anthony Abrantes, assistant executive secretary-treasurer, Eastern Atlantic States Regional Council of Carpenters and board member of Carpenter Contractor Trust (CCT), both with New Jersey offices in Edison, comments, “People are starting to look for different ways to learn. There’s been an approach to build satellite facilities, expand facilities, and make it easier not only for students coming out of high school – but for executives – to learn both in person and remotely.”

Construction trade unions have facilitated various projects such as the renovation of Brookdale Community College’s Gorman Hall and Stockton University’s second phase of its Atlantic City campus, which includes a 135,000-square-foot, $69.3 million residence hall scheduled to open in fall 2023.

Also on the construction list is Princeton University. “A lot of work has been done [at Princeton] and a lot of expansion is yet to come,” explains Local 825’s Lalevee. The university now has 11 construction projects underway including, but not limited to, a new home for its School of Engineering and Applied Science, as well as the TIGER building, a structure which will feature geo-exchange

“I only know one way to get a [wind] turbine 200 feet in the air on a pedestal, and that’s with a crane that floats,” explains Local 825’s Lalevee, touting his operating engineers’ abilities.

Carpenters will be part of the equation, too. Broadly referring to many job sites, CCT’s Abrantes adds: “Construction divers are underwater, welding base structures at sub-180 feet. … Those are carpenters.”

Robert Lewandowski, a spokesperson for Laborers’ International Union of North America (LIUNA), outlines additional construction union activity associated with offshore wind: “Another part is onshore transmission; you have to move that [offshore wind] energy somewhere. So, our members and contractors are busy working on everything from switching stations to an improved [electrical] grid.”

Sometimes lost in New Jersey’s wind power news is construction of The New Jersey Wind Port in Lower Alloways Creek, which will serve wind projects both in the state and along the East Coast. With a 2023 targeted completion date, hundreds of union members are now working on the project, which will eventually annually support up to $500 million in new economic activity.

Infrastructure projects can also be more traditional, such as replacing the aforementioned Portal North Bridge in Kearny, a moveable swing span that originally entered service in 1910. An August groundbreaking occurred for a new, fixed structure which will rise 50 feet above the Hackensack River.

The replacement bridge is a component of the broader Gateway Program, which additionally aims to build a new rail tunnel underneath the Hudson River and repair the old two-track tunnel currently in service. It is estimated that the Hudson Tunnel Project alone will create 72,000 jobs and generate $19 billion in economic activity.

A memo of understanding (MOU) was signed in July by the governors of New York and New Jersey, detailing a mix of federal and local funding for Phase One of the Gateway Program. It is anticipated that tunnel construction will commence in 2024, with its completion slated for 2035; repairs on the old tunnel are expected to last until 2038. The total cost for both the bridge and the tunnels is estimated at $16.1 billion.

Underpinning some of New Jersey’s upcoming infrastructure work is the $1.2 trillion federal Infrastructure Investment and Jobs Act (IIJA), signed into law in November 2021. It will infuse New Jersey with some $13 billion over the next five years for highways, transit, bridge repair and replacement, electric vehicle charging stations and ferry facilities, as well as for water infrastructure, energy and internet/broadband capacity.

Beyond the various benefits and economic impacts of institutional and infrastructure projects, CCT’s Abrantes concludes, “Whether we’re talking about hospitals or colleges for students or energy [projects], road and bridges … we make sure that when our members and our contractors [are involved with] those projects, we’re bringing the best value and the best product to the market because there’s a human impact – a human effect.”

Gateway Tunnel ‘Will Have to be Built’