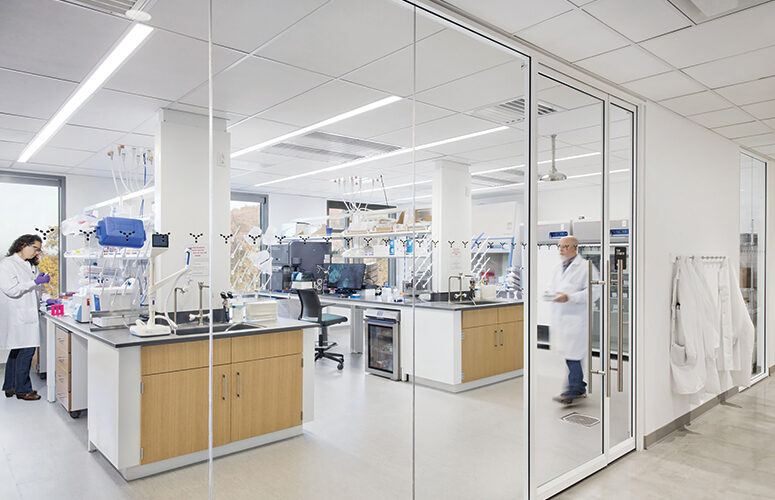 Genmab recently moved its US headquarters and R&D laboratories into a state-of-the-art facility in Princeton.
High-Tech

New Jersey’s biotechnology cluster has grown from a mere 30 companies in the early 1990s to approximately 3,200 establishments in the state today, with 46 of those firms responsible for a staggering 70 new FDA drug approvals between 2020 and 2021, according to the trade association BioNJ. And several sources indicate that despite recent IPO and capital market challenges, the biotech cluster’s ascension continues.

Debbie Hart, president and CEO of BioNJ, says of the overall US/global biotech community: “The science is advancing by leaps and bounds, and it’s creating lots of opportunities, new companies, and new advances in therapies and treatments.

“When you look at what happened during the [coronavirus] pandemic – how the industry can really save the world – [it’s] not an understatement. It just speaks to ability and the science.”

New Jersey’s specific biotech juggernaut partly stems from a constellation of cutting-edge advances in cell and gene therapy operating in tandem with a Garden State life sciences ecosystem replete with contract manufacturing and clinical research organizations, as well as specialized accountants, attorneys and other professionals who serve the industry.

Such a network is particularly important for the biotechnology community given the challenges it faces. Dean J. Paranicas, president and CEO of the HealthCare Institute of New Jersey (HINJ), details the overall “high risk profile” for the biopharmaceutical industry: “There’s that challenge of having enough capital to develop your product, being able to get it through the regulatory cycle, and then commercializing [it] and getting it into the marketplace.”

Paranicas additionally explains that New Jersey firms have beneficial opportunities to coordinate with the state’s research institutions as well as with more established companies located here.

Also helping to lubricate the state’s growing industry is New Jersey’s proximity to Wall Street and, separately, a time-zone advantage, which facilitates business communication with locales as diverse as, say, California and the United Kingdom.

“The quality of life is very good [in New Jersey],” Paranicas emphasizes. “And there is an extraordinarily talented workforce with more scientists and engineers per square mile [in the state] than anyplace in the country.”

BioNJ’s Hart adds “The price for real estate in New Jersey is very competitive when you look at New York City or Cambridge (Massachusetts), in particular … and then you pile on top of that the different incentives New Jersey offers, and … you have yourself a biotech ecosystem that is growing and burgeoning.”

The New Jersey Economic Development Authority (EDA) has incentive programs such as its Innovation Evergreen Fund which, in effect, partners with the private sector to raise money for growing companies by auctioning off tax credits to New Jersey businesses. Meanwhile, the New Jersey Commission on Science, Innovation and Technology (CSIT) has also been facilitating growth in science and technology spheres by, in part, ensuring industry/academia collaboration.

Within New Jersey’s overall biotech boom, there are specific, noteworthy developments such as Tevogen Bio – a biotech company specializing in developing cell and gene therapies in oncology and viral infections – recently opening a new corporate office in Warren.

And, global biotechnology company BeiGene purchased a 42-acre site in Hopewell, which it plans to develop into a state-of-the-art manufacturing campus and clinical research and development center. A groundbreaking ceremony occurred in late April. The facility is slated to include up to 400,000 square feet of commercial-stage biologic pharmaceutical manufacturing, as well as clinical R&D and office space.

Separately, Gilead Sciences, Inc. is expected to create a Northern New Jersey corporate hub, which would include closing its Morris Plains location and moving about 115 employees to a yet-to-be-determined site within a five-mile radius. Employment would eventually swell to about 500 jobs at the new location, with positions ranging from medical and regulatory affairs, to supply chain and quality assurance, according to a published report. Other jobs would feature those in human resources, finance and information technology, as well as engineering.

“New Jersey is the place where we believe we could recruit incredible people, especially in the oncology space,” Joydeep Ganguly, senior vice president and head of corporate operations at Gilead told New Jersey Business Magazine in March.

Other biotechnology developments in New Jersey include, but are not limited to: Hovione adding a 31,000-square-foot building next to its current East Windsor facility; Eisai, Inc. relocating its US headquarters to the ON3 complex in Nutley, where a state-of-the-art facility will eventually accommodate 1,300 employees; and Genmab moving its US headquarters and R&D laboratories to Princeton.

And while many New Jerseyans are likely already aware that the $665 million, 550,000-square-foot New Jersey Innovation and Technology Hub broke ground last fall in New Brunswick – and, separately, that The Cove in Jersey City project (land parcels near medical and science facilities where science/innovation is ultimately expected to occur) have been announced – the significance of these two developments arguably cannot be understated.

BioNJ’s Hart explains, “[These] are two particular real estate development opportunities that will change the landscape, literally and figuratively, in New Jersey, and create hubs of activity.”

She adds, “[They] will be ecosystems within the larger ecosystem of New Jersey and create tremendous opportunities for those who locate there. Also, New Jersey will reap the benefits.”

The broader industry nonetheless faces distinct headwinds ranging from a dampened IPO market and capital markets scenario, to looming legislative/regulatory threats at both the state and federal levels.

The IPO market is particularly tepid following a long boom period, with BioNJ’s Hart saying, “The IPO market, which was really flying high in recent years, has just about shut down at this moment in time. … It ebbs and flows, but right now we’re going through a particularly difficult time. I think it [has to do] with what’s going on in the world right now: Proposals by lawmakers [that would impact biotech]. It’s the supply chain. It’s the financial markets. … It’s things building upon each other.”

At the state level, Hart cites a proposal for a New Jersey Prescription Drug Affordability Review Board that could become, in effect, “price controls,” and at the federal level, she also sees policies that could have an equivalent impact of stifling life sciences innovation.

Speaking more broadly, HINJ’s Paranicas says, “If we don’t have the right environment – whether it is New Jersey or nationally – we are going to lose our leadership position. When I say the right environment, [I mean] you [need] a combination of public policy that recognizes and therefore supports medical innovation both at the state level (we continue to work closely with the governor and the Legislature) and also at the federal level. Our congressional delegation recognizes and understands the significance and importance of the life sciences industry to the state and the country.”

He also says, “If you don’t have the right policies to support that and nourish [the industry], I think it’s obvious that as we move forward, many of those companies that might consider New Jersey would think about going somewhere else. And that’s exactly what we’re working hard to ensure they don’t do.”