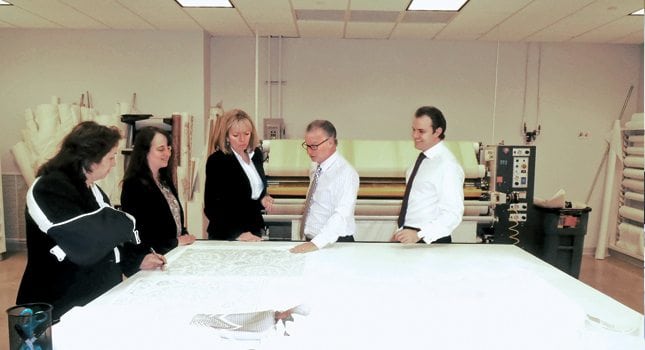 Michele Brown, CEO of the EDA (third from left), welcomes Glenmore Industries, which recently relocated from Brooklyn to Edison. The home and industrial textile products company received a Business Employment Incentive Program (BEIP) award worth an estimated $693,577 over 10 years. (Photo courtesy of NJEDA)

This year marks the 40th anniversary of the New Jersey Economic Development Authority (EDA), the independent state agency that, since 1974, has: helped create more than 333,100 new jobs in the state; generated more than 345,300 construction jobs; and has provided more than $23.6 billion in financing assistance through its vast array of business loan, grant and tax incentive programs. This assistance has leveraged some $51.9 billion of investment in the state’s economy.

One can see EDA’s impact by viewing the state’s corporate landscape which is dotted by EDA-assisted projects, such as Panasonic’s $200-million, 12-story North American headquarters in Newark, which opened last year. Other recent EDA projects to keep or expand jobs in the state include tax incentives for Bayer Healthcare, Watson Pharmaceuticals, Lockheed Martin, Honeywell, Siemens Healthcare, UBS Financial Services and Pearson, Inc. In the latest news, the Authority is providing JP Morgan Chase with tax grants valued at $225 million for the creation of 1,000 jobs and the retention of 2,612 positions in Jersey City.

As a testament to the Authority’s importance, a number of state business leaders praise the EDA for its continued assistance in supporting New Jersey’s economy.

According to Melanie Willoughby, the New Jersey Business & Industry Association’s acting president, “The Authority has been instrumental in maintaining and attracting business and investment, as well as creating and maintaining jobs. In particular, it has worked hard to ensure that small businesses have the resources they need to invest in themselves and become successful. The Authority has also played an integral role in the success of many NJBIA members. Whether it is financing, access to capital, business incentives or tax incentives, the EDA has been a terrific economic facilitator.”

Jay Biggins, a site location and incentives specialist and executive managing director of Biggins Lacy Shapiro & Company, LLC, comments, “We work with thousands of economic development entities throughout the nation. The EDA ranks at the top across every measure, from the ambition of its mission, to the skill of its staff, the tools it has developed and, most importantly, its impact on the market.”

Ted Zangari, chair of the real estate department and public policy practice group at Newark-based law firm Sills Cummis, says, “I am proud to salute ‘New Jersey’s bank’ for 40 years of dedicated public service. The EDA has consistently been the single most important driver of jobs and wealth creation in our state through one administration after another.”

As for representatives of the state’s biotechnology community, Debbie Hart, president of BioNJ, expresses, “The EDA has been an important supporter of – and partner to – the biotechnology industry and BioNJ over many years. Its entrepreneurial spirit and creative approach to economic development, including its involvement in the creation of the Technology Business Tax Certificate Transfer program, the Angel Investor Tax Credit program, and the Life Sciences Venture Fund, has established a remarkable legacy and launch pad for new companies.”

Meanwhile, Maxine Ballen, of the New Jersey Technology Council, states, “Since the NJTC’s launch in 1996, our members have clearly been the beneficiaries of the EDA’s programs and services. From the hugely successful Technology Business Tax Certificate Transfer program to the venture fund investments, from small business loans to the employment hiring incentives, the EDA has remained on the cutting edge of innovative programs. These unique programs have contributed successfully to keeping thousands of jobs in New Jersey.”

Birth of the EDA

The Authority was created via The New Jersey Economic Development Authority Act of 1974. At that time, the state needed an agency that could issue tax exempt bonds to make low cost capital available to businesses, according to Michele Brown, the EDA’s chief executive officer.

Caren Franzini, former EDA CEO, who spent more than 20 years at the agency before leaving in 2012, adds, “These were times of high interest rates and high unemployment.” Additionally, she says the Authority was created to assist manufacturers and prevent industry jobs from leaving the state.

Within a year of its founding, the EDA was providing loans to small businesses that were having a difficult time accessing financing from private markets. “We then expanded beyond direct loans to providing loan guarantees and participations with financial institutions,” Brown explains.

Just through its core lending, the EDA has provided more than 4,000 businesses with approximately $3 billion. That translates into nearly 70,000 new jobs created and nearly 40,000 retained. Regarding bond financing, the EDA estimates having created 155,000 permanent jobs and more than 250,000 construction jobs through the support of more than 5,000 projects, according to Brown.

The Authority, as mentioned, has a vast array of products to serve businesses. Throughout the past 20 years, some of its tax incentive programs have included the Business Employment Incentive Program (BEIP), Business Retention Relocation and Assistance Grant (BRRAG), Urban Transit Hub Tax Credit program, the Grow NJ program and the Economic Redevelopment and Growth (ERG) program. With the passage of last year’s New Jersey Economic Opportunity Act, these incentives were streamlined into Grow NJ and ERG.

Explaining the change, Brown comments, “We had heard from site locators, commercial real estate brokers and employers who were considering New Jersey that our broad array of incentives was unduly complicated, difficult to explain and served as a barrier to opportunities.

“One real estate developer told us, ‘I need to have a quick elevator conversation with a new employer who is interested in the state. I can’t have that with all of these programs … Give me something more simple.’ So what we did with the Economic Opportunity Act was synthesize all of the programs into one for business growth (Grow NJ) and one for development (ERG),” Brown says.

The EDA develops its programs by listening to the needs of business and observing what other states are offering as incentives.

Franzini says, candidly, “Like any businesses, we find out what the competition is doing and steal their good ideas.” As a long-time member of the National Council of Development Agencies, of which Franzini was a chair, she says it has been easy for the EDA to see what other states are doing.

Brown adds, “We regularly look at what the competition is doing. Several years ago, for example, we were constantly losing jobs to New York and Pennsylvania because of their better incentive programs. Naturally, the cost of living and education plus the tax consequences to businesses are all part of the equation. But in our experience, when there are powerful incentive tools like the Keystone Opportunity Zones in Pennsylvania, they really work to our detriment. So part of what we do and part of the service we provide, both to the Legislature as it is crafting new bills and, of course to the Governor’s Office, is assess and right-size our programs.”

While the Authority develops its own assistance programs and provides money from its revolving loan funds, it also helps implement programs developed by the State Legislature or the Governor’s Office. According to Franzini, because the EDA has developed a strong reputation for sound money management, the Legislature or the Governor’s Office will ask it to make sure their respective initiatives are sound.

While certain critics have commented that the state and the EDA have been giving large companies tax incentives that are “too generous,” Franzini stresses that incentives are never given “up front.”

“A company has to first build its building, hire the employees and become operational. The EDA then analyzes the incentive annually to see if it will be provided. It can pull the incentive back,” she says.

In support of the Authority’s programs, Zangari, of Sills Cummis, adds, “The EDA has promoted economic development without recklessly or needlessly subsidizing transactions. Through rigorous vetting, scrupulous underwriting and transparent processes, it has fairly, responsibly and openly rewarded deserving projects and businesses with a high degree of confidence that the state’s coffers would reap a return on its investments over time. The EDA’s track record is clear: New Jersey has retained and attracted hundreds of businesses and projects, and thousands of jobs as a direct result of its hard work.”

A Partnership in Action

In terms of working with the Governor’s Office, when the Christie Administration created the New Jersey Partnership for Action four years ago as the state’s robust economic development strategy, the EDA took a seat at the table, working with the Lt. Governor, the Business Action Center (BAC), Choose New Jersey, and most recently, the Office of the Secretary of Higher Education.

Timothy J. Lizura, EDA president and chief operating officer, who has been with the Authority since 2008, says the Partnership allows the EDA “close coordination with the BAC, Choose NJ and the Lt. Governor’s office. We have strategic meetings on a weekly and monthly basis. Last year’s addition of the Secretary of Higher Education to the Partnership has been tremendous because when companies look to locate to a jurisdiction, access to a well-trained labor force is one of the things we always hear about. So increasing the collaboration between the higher education and business communities is key to that success.”

Franzini adds that with the Partnership for Action, the EDA can sit down with the other entities and “hear about some of the complaints coming to the Lt. Governor’s Office and see where business needs are not being met. The Authority is now more focused oriented. It was always there as a player, but it wasn’t necessarily part of the strategy driving business retention and attraction.”

There is so much more that the EDA provides, such as incubator space for high-tech startups, Hurricane Sandy relief aid for businesses and municipalities, venture fund assistance, brownfield remediation programs and clean energy assistance. A complete review of its programs can be found online at www.NJEDA.com.

The two women who have been at the helm of the EDA (past and present) both say that Authority staff and board members are among the reasons for its continued success.

“It’s not only the range and breadth of what we offer that makes us successful, but having a really good professional and competent team,” Brown says. “There are so many enormously talented and dedicated people who work here … many have been here for more than 20 years. They are now experts in what they do.”

Franzini adds that the EDA’s success is due “to the leadership of its chairmen and the committed members of the board of directors. Chairman Tony Coscia created financial programs to leverage public dollars to encourage private banks and investors to fund projects in the state. He guided the organization to implement private banking procedures in the underwriting and accounting for EDA loans. Chairman Carl Van Horn helped us think through policy implications and measure the impact of our investments. Current Chairman Al Koeppe enhanced the EDA by bringing private-sector governance procedures to the board and staff organization. He set forth the structure for staff to implement Sarbanes-Oxley type financial procedures, even though we were a public entity.”

Brown says that among the many things that makes the EDA different from economic development agencies in other states is that the Governor’s Office and the Legislature in New Jersey have consistently turned to the Authority to handle new programs on a consistent basis. Other states would have set up different entities to run an ERG program or Grow NJ program, for example. “We are not going to create five different organizations in New Jersey for economic development. We are going to have the EDA handle that. That is why we have the breadth and responsibility that you don’t typically see in other agencies.

“Every New Jersey Governor for the last 40 years has entrusted that responsibility to the EDA … that says a lot about our reputation.”

The Internet of Things: Profits, Perils and Paradoxes