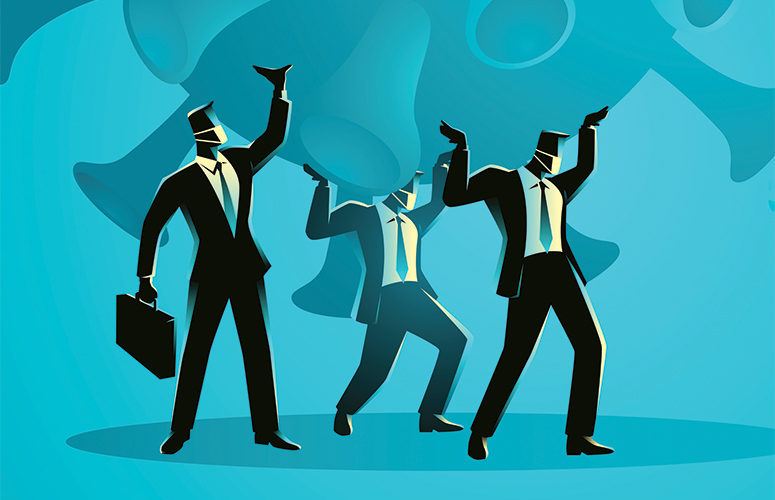 A global pandemic made 2020 a year to forget for businesses. Looking beyond COVID-19, a crushing business climate remains in New Jersey.

In last year’s Business Outlook Survey, most respondents said they were anticipating an economic downturn.

But no one saw this coming in their 2020 vision.

The onset of the COVID-19 pandemic resulted in an economic meltdown, with unforeseen closures of operations and record unemployment, to say nothing of consumer confidence as masked shoppers treaded lightly throughout the nation.

Nowhere has this been more felt than in New Jersey, the state that maintained its shutdown for the longest period and has been a national outlier in terms of pace of reopening and capacity levels.

Many of the results of NJBIA’s 2021 Business Outlook Survey are what you might expect for such a devastating plunge of New Jersey’s economy. Revenue losses were severe, with a whopping 76% of respondents experiencing decreased earnings through the first eight months of 2020 – including some deeper losses in healthcare and transportation.

Moreover, 77% said they believe they will continue to incur losses as the survey was being fielded in September – with 27% saying they would continue to lose revenue through the rest of 2020 and 33% forecasting continued losses through the first half of 2021.

There certainly was no shortage of efforts by employers to right the ship during the stormy seas of 2020. Some 56% said they sought additional or alternative funding sources through federal and state loans and grants, while 59% reduced expenses and overhead. Among those decreased expenses were reduced salaries (20%), furloughed employees (22%), and laid-off workers (23%).

Recovery-wise, 47% said they will either take more than a year, or never will, generate profits lost during non-essential business closures.

And, looking ahead to 2021, healthcare coverage could certainly be impacted as a result of this reduced revenue. Out of the 72% of respondents who offered health insurance in 2020, 28% of them said they’ll discontinue that coverage in 2021.

Concerns about increasing the minimum wage and the potential legal impacts of recreational cannabis were also raised, as in years past. But with the onset of the coronavirus, a new worry has emerged in the form of litigation brought by those who claim they contracted the disease while at the workplace.

With all of this, there was the expected negative outlook for New Jersey’s economy in 2021, particularly compared to the forecast for the national economy.

But ironically that dim economic prognosis for the state wasn’t as dark as it was for the 2020 outlook from New Jersey employers.

Not surprisingly, there was a sizable shift in employment from recent years. Only 10% said hiring in their company increased in 2020, compared to 33% who reported a decrease in employment. That’s a net negative of -23%, the first negative net hiring activity in this survey since 2012.

There is a glimmer of optimism, however, for the hiring outlook in 2021. While 65% anticipated their hiring will stay the same, 25% said they will increase hiring in 2021 – compared to 10% who said they will hire less. That’s a +15% net positive hiring outlook. While a far cry from +20% outlooks for the years 2017-2020, it is an indication that employers will try to hire back even in the midst of an ongoing pandemic.

Actual sales for responding businesses took it on the chin in 2020. Only 19% said their sales increased this year, while a deflating 62% saw a decrease in sales. That net -43% decline in sales marks the first net negative in sales in this survey since the Great Recession of 2008. Even then, that net negative was only -14%.

A rebound in sales is projected for 2021, however. A total of 46% anticipate increased sales in 2021, compared to 23% who foresee less sales. The +23% net positive outlook is the lowest since 2015 and perhaps a sign of “it couldn’t get much worse” syndrome.

Predictably, profits and pandemics don’t mix. Only 20% reported net profits for the year, compared to 62% who recorded a loss. This marks the first net negative of earnings (-42%) in this survey since the outlook for 2012.

Businesses go into 2021, however, with some optimism – although less than in previous years. Forty-one percent expect to make a profit next year, compared to 27% who don’t. That net positive of +14% is the lowest outlook for profits since 2012, when 9% expected to be in the black. Out of those who anticipate a profit, most (41%) only expect to make between 1% and 3%.

As many businesses had less opportunity to sell, it’s perhaps not surprising that 31% of respondents said they increased prices substantially or moderately in 2020. At the same time, only 10% said they decreased prices. More positively, particularly given the economic conditions, 59% said their prices stayed about the same.

Members maintain some optimism about their future purchasing plans, with 37% expecting to increase the dollar value of their purchases in 2021 and 20% anticipating a decline. This net positive of +17%, however, is way down from more recent annual projections, and is the lowest spending vision since the outlook for 2013 when the net positive was 19%.

For the fourth straight year, respondents listed property taxes as the issue that is most troublesome for businesses – after years of health insurance costs topping the list as the No. 1 burden.

This year, 30% said property taxes are the highest concern – a 5% increase from last year. The overall cost of business in New Jersey was second at 24%, while health insurance costs were third at 14%.

Despite its continued relative drop in importance, 71% of members expect their health benefits costs to go up in 2021 – similar to responses in the previous five surveys. Fifteen percent of respondents anticipated those costs to rise 11% or more in 2021.

While New Jersey’s typical challenges have been exacerbated by the shutdown, 77% said they were very confident or somewhat confident that their company will outlast the economic downturn.

The new COVID-19 world has resulted in another new concern for business – litigation. As NJBIA continues to loudly advocate for liability protection for employers who follow safety protocols, 45% of respondents said they would not be able to afford litigation costs.

Relatedly, 66% of business owners said they were concerned about being sued by patrons claiming they contracted COVID-19 at their workplace. 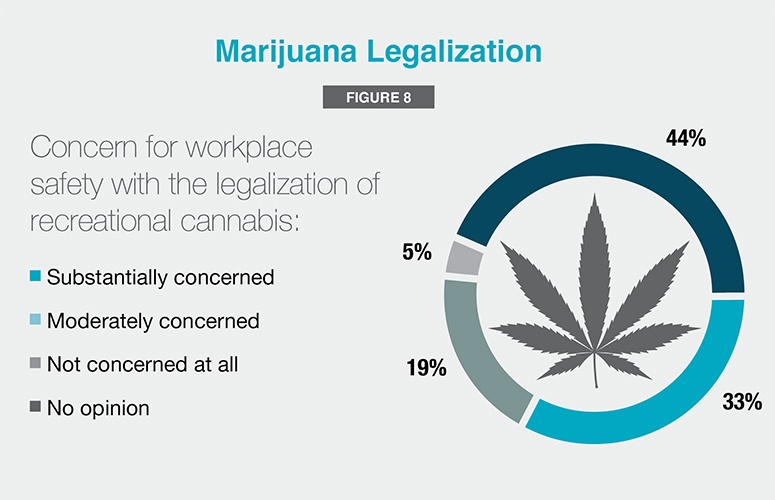 As New Jersey continues its set course to a $15 minimum wage in 2024, potential employer impacts remain like past years, with 51% expecting that full rate to impact their business in the form of raising prices (30%), reducing staff (18%), reducing benefits (15%), and/or automation (10%).

In anticipation of the legalization of recreational cannabis – confirmed by a ballot vote during the Nov. 3 election – 44% said they were substantially concerned about workplace safety if it became law, while 33% said they were moderately concerned.

Respondents were also asked for the first time if they felt that any employee using medical marijuana should only serve in non-safety sensitive positions. Sixty-two percent said yes, 14% said no, while 24% said they were not sure.

In recent history, the percentage of actual and planned pay raises have been fairly consistent in this survey. But not this year.

In 2020, 54% of companies gave pay increases. While that may seem like a positive number, it’s actually down 23% from last year. Most strikingly, 40% gave no raises – 19% more than last year. Another 6% lowered their wages, compared to just 1% last year.

As for planned pay raises in 2021, 28% plan to provide a bump between 1% and 2.9%. That’s 6% lower than last year for that rate of increase. There also appears to be a majority of employers holding the line on raises – with 40% anticipating no wage increases. That’s 16% more than those who anticipated staying status quo entering 2020.

The concern about New Jersey’s overall business climate is a continuing theme, with COVID-19 shining a brighter light on it

Forty percent said they’re experiencing a slowdown in their industry. Manufacturing nondurables (45%), retail (45%), services (45%), wholesale (43%), and healthcare (41%) were the industries which most reported a slowdown.

Many comments offered by respondents in the survey continued to show a loathing for New Jersey’s high taxes. As such, New Jersey found itself once again at the bottom of NJBIA’s 2020 Regional Business Climate report. The Tax Foundation also ranked the state as dead last in the nation in its most-recent State Business Tax Climate Index – an unfortunate distinction since 2015.

With all of that, there is a continued reluctance for businesses to expand in New Jersey. Only 8% said they would open another location in the Garden State, while 31% said if they chose to expand, it would be in another state.

As a location for new or expanded facilities, only 15% listed New Jersey as very good or good, while 21% described it as fair, and a disappointing 49% ranked it as poor.

There is increasing discouragement with New Jersey’s regulatory processes. Only 10% believe our state made progress over the last year in easing regulatory obstacles. That number has declined steadily from 24% in 2017.

Eleven percent said they needed to postpone installation of equipment or expansion of their business due to permitting delays or the state’s regulatory process.

Only 32% said they are planning to keep New Jersey as their domicile in retirement, a 7% decrease from last year and a consistent indication of New Jersey’s relatively low appeal for people in their golden years.

Coronavirus or no coronavirus, New Jersey’s performance compared to other states is fairly well established by the business community. This year, there was little change in those standards – although just about all of them are going in the wrong direction, according to respondents.

But New Jersey also continued to fare worse in areas where it typically does not rank well to begin with. When it comes to taxes and fees, for example, 90% reported the Garden State was worse than other states – 1% higher than last year.

In each of these areas, New Jersey’s low favorable percentages were lower than the previous year by a small margin.

Twenty-one percent said New Jersey was better than other states to live.

The pandemic did little to help New Jersey’s economic outlook for 2021, although the peril is surprisingly not as deep as last year when COVID-19 wasn’t on the horizon.

When asked how New Jersey’s economy will fare in the first six months of 2021, 28% reported it would be better, while 40% said it would be worse. While that -12% net outlook is certainly nothing to celebrate, it is an improvement from the -28% net outlook for 2020.

Respondents were decidedly more upbeat about the US economic outlook. Some 54% thought the national economy would perform better through the first six months of 2021, compared to 17% who said it would fare worse.

That +37% net positive outlook is 30 percentage points higher than the US economic outlook for 2020. The more optimistic US outlook compared to New Jersey’s negative outlook could be attributed to the Garden State’s slower reopening pace relative to the rest of the nation.

Regarding specific industry outlooks, 43% called for a better first six months of 2021 and 16% predicted it to be worse. The +27% net outlook is 10 percentage points higher than last year. But the 41% who reported the same outlook may be concerning in that many industries drastically underperformed in 2020.

It was a historically challenging year for New Jersey businesses and the results in NJBIA’s 62nd Annual Business Outlook Survey reflect that.

Underscoring the numbers were the words. Respondents were asked to simply give their thoughts on New Jersey’s business climate – good, bad or otherwise. And an overwhelming majority of the responses ranged between exasperated and resentful.

Tellingly, most of the shared acrimony had little to do with COVID-19. Instead, it was decidedly about taxes and the high cost of doing business in New Jersey. Hundreds expressed the feeling, often in colorful terms, that New Jersey’s government is “anti-business.”

As typical, there remains bullishness from New Jersey’s employers. Many forecast they’ll hire more and give pay raises. And companies still anticipate growth in 2021 and express optimism that they’ll get through this economic crisis.

But COVID-19 or not, it is clear that New Jersey will still be left with deep-set issues that won’t really change without improving the state’s business climate and clearing the obstacle-filled path to prosperity.

Questions for NJBIA’s 62nd Annual Business Outlook Survey were sent to New Jersey business owners and executive staff in September 2020. The report is based on 1,070 valid responses.

Most respondents were small businesses, with 66% employing 24 or fewer people.