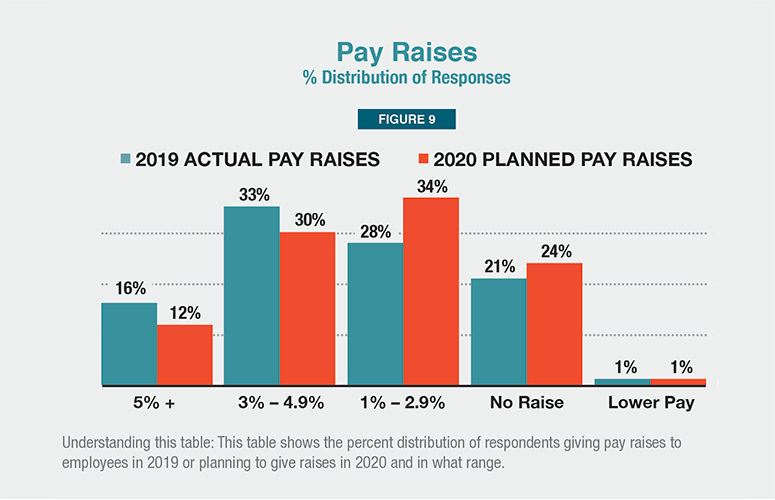 Despite solid 2019 numbers, employers’ expectations for the New Jersey and national economies are taking a decided downturn for the new year.

The weather vane that is New Jersey’s business mood is taking a bit of a turn.

For many respondents in NJBIA’s 61st Annual Business Outlook Survey, there are clouds on the way after mainly sunny skies over the last few years. And recent cautious optimism is yielding to plain old cautiousness for New Jersey businesses in their 2020 outlook.

Of course, there is proud Garden State business bullishness to go with the wariness. Members were asked about the possibility of the national economy entering a recession. A combined 55% forecasted an economic downturn in 2020 or 2021. (See Figure 1) But another 44% – perhaps channeling Walt Disney’s axiom – “I’ve heard there’s going to be a recession. I’ve decided not to participate” – said they don’t envision a recession in the next two years.

Those forecasting a recession indeed have set their plans to address it – with 62% planning to reduce operational costs, 50% growing their customer base, 35% postponing hiring and 32% stalling raises. (See Figure 2)

Also on the plus side, the dollar value of companies’ sales, profits and purchases went up in 2019 – and hiring and actual pay raises also increased this year.

However, the rates of all of those increases were not as high as they were in 2018. And the forecasts for 2020 in all of these categories are lower than they were in the 2019 outlook.

The most telling traits in NJBIA’s 2020 Business Outlook Survey are in the expectations for the US and New Jersey economies. Nationally, the net outlook is dramatically lower than a year ago. And New Jersey’s economic outlook – while historically not a high-confidence zone – is actually the lowest it has been in a decade.

Further, New Jersey’s competitiveness level in many areas where the Garden State is already much maligned – like taxes and fees, controlling government spending, and attitude toward business – all dipped lower.

For the second straight year, property taxes represented the top concern of business owners – proving yet again that taxes do matter.

Concerns about the phased in $15 minimum wage – now law in New Jersey – and the specter of cannabis legalization remain consistent from last year. Also virtually unchanged is the high percentage of business owners who do not plan to stay in New Jersey for their retirement.

But, there is still some Jersey positivity to be found in this survey. Attitudes toward well-established areas of strengths, like quality of public schools and workforce, actually crept up in the right direction.

Unemployment numbers are at historic lows nationally and in the state, and the employment picture from respondents bore that out.

The hiring outlook for individual companies is also positive, but not as rosy as the forecast for 2019. A total of 30% expect to increase employment either substantially or moderately in 2020, compared to 9% who anticipate a moderate or substantial decrease in employment. That +21% net positive is a solid number to be sure, but decidedly lower than the +32% net positive outlook in employment from a year ago. (See Figure 3)

Actual sales for member businesses were uniquely consistent from last year. In 2019, 54% said sales had increased by varying percentages, compared to 18% that reported fewer sales. That +36% differential is the same exact net positive disclosed by respondents in 2018.

Price increases by businesses, perhaps the result of compensating for the costs of new workplace mandates, continue to be a notable trend. One percent of respondents said they substantially increased prices of their primary products and services, while another 48% said they had moderate increases. At the same time, only 3% said they decreased prices moderately or substantially.

Members maintain optimism about their future purchasing plans, with 43% expecting to increase the dollar value of their purchases in 2020 and 15% anticipating a decline. This net positive of +28% is down slightly from 2019 projections (+32%) and even more so than 2018 forecasts (+39%).

Last year marked a change in what NJBIA members felt was their top business concern, with property taxes taking over as a top issue after years of health insurance costs being the No. 1 burden.

This year, property taxes remain members’ highest concern – with 25% naming it so for the second consecutive year. The overall cost of doing business was a close second at 24%, and health insurance costs were third at 17% – a drastic drop-off from the 30% who listed it as their top concern just two years ago.

Despite its continued relative drop in importance, 75% of members expect their health benefits costs to go up in 2020 – which is similar to responses in the previous four surveys. Fifteen percent of respondents anticipated those costs to raise 11% or more in 2020.

Interestingly, for the second straight year, 24% said they would not provide pay increases in the upcoming year. One percent say they will lower pay.

A new $15 minimum wage was made law this year, though with a phased-in approach that will see the full mandate come to fruition for most businesses by 2024.

Looking ahead to that date, 51% expect that full rate to impact their business. Of that set, 32% say they will raise prices, 21% will reduce staff, 15% will reduce benefits and 13% will look toward automation. (See Figure 7)

The legalization of recreational cannabis still has not come to fruition in New Jersey, although both legislative leadership and Governor Phil Murphy continue to see it as a priority. When respondents were asked for the first time in this survey if they felt the potential legalization of recreational cannabis would be good for the state economy, 44% said yes and 56% said no.

We also asked business owners if they had any concerns about legalized recreational cannabis and 67% said yes. Of those respondents, 84% said their considerations revolved around safety in the workplace and 75% said productivity of workforce was a concern. Chronic absenteeism (45%) and proximity to dispensaries (17%) also gave them pause. (See Figure 8)

The growing concern about New Jersey’s overall business climate serves as the counter to members’ bullishness about their own businesses.

Many comments offered by respondents in the survey show a keen awareness of New Jersey’s realities regarding its status of being ranked the highest or near-highest in multiple tax categories. As such, New Jersey found itself once again at the bottom of the NJBIA 2019 Regional Business Climate report. The Tax Foundation also found New Jersey was dead last among the 50 states in its 2020 State Business Tax Climate Index – an unfortunate distinction our state has had for the past six years.

With that, there is a continued reluctance for businesses to expand in New Jersey. Only 14% say they would open another location in the Garden State, while 30% said if they chose to expand, it would be in another state. (See Figure 6) As a location for new or expanded facilities, only 21% listed New Jersey as very good or good, while 41% described it as fair and 38% ranked it as poor.

Much of this continued trend reflects discouragement with New Jersey’s regulatory processes. Only 13% believe our state made progress over the last year in easing regulatory obstacles. That’s down from 17% last year and 24% in 2017.

One area of improvement for New Jersey was found in only 9% of respondents needing to postpone installation of equipment or expansion of their business due to permitting delays or the state’s regulatory process. Last year, 14% reported such delays.

Only 39% said they are planning to keep New Jersey as their domicile in retirement, a 3% increase from last year perhaps buoyed by the phasing out of the estate tax in 2018. (See Figure 6) However, it’s still a consistent indication of the relatively low appeal for people to spend their golden years here.

Predictably, the current foretelling of an economic slowdown has lessened overall optimism when compared to recent years. Add New Jersey’s struggling business climate to the mix and our state outlook for overall performance takes a sizable hit in 2020.

When asked how New Jersey’s economy will fare in the first six months of 2020, compared to 2019, only 12% reported it would be better, while 40% said it would be worse. The -28% net outlook is the lowest since 2009 when, in the throes of The Great Recession, respondents had a -42% outlook for New Jersey. By comparison, the net outlook for the first six months of 2019 was flat at zero with 30% predicting better and 30% predicting worse. (See Figure 11)

Industry–specfic outlooks followed the same path, with 27% calling for a better first six months of 2020 and 17% predicting it to be worse. The +10% net outlook is decidedly lower than the outlooks of the previous two years (both at 28%).

Where New Jersey is strong and weak compared to other states is fairly well established by the business community. But to what extent, for either direction, is always variable.

To that end, there’s some good news – but mostly bad news when it comes to the annual comparison of New Jersey and other states.

But New Jersey also fared worse in areas where it typically does not rank well. When it comes to taxes and fees, for example, 89% reported the Garden State worse than other states. New Jersey was also listed as worse than other states in controlling government spending (79%), attracting new business (68%), controlling healthcare costs (67%), controlling labor costs (65%), the cost of regulatory compliance (62%), and attitude toward business (60%).

In each of these areas, New Jersey’s low percentages were lower than last year’s. And, in some cases, it was by a wide margin.

There are many positives to take away in NJBIA’s 61st Annual Business Outlook Survey. As in recent years, the dollar value of companies’ sales, profits and purchases all went up in 2019. Hiring and pay raises continued to increase, as well. And many companies are anticipating continued growth in 2020, albeit at a lower rate or pace than in 2019.

However, the outlook for the economy for 2020, both at the national and state level, is not nearly as rosy as it has been. Nationally, there is a recognition of an economic slowdown. And statewide, many small businesses have had to contend with the cumulative costs of new workplace mandates on top of New Jersey’s high taxes and cost of doing business.

The survey suggests that New Jersey business will make efforts to adapt to or accommodate any fiscal challenges. What remains to be seen is whether the burdens on business will increase during the current administration and the severity of an economic slowdown, if there is one.

Questions for NJBIA’s 61st Annual Business Outlook Survey were sent to member business owners in September 2019. The report is based on 878 valid responses, with a response rate of 6.1%.

Most respondents were small businesses, with 61% employing fewer than 24 employees.