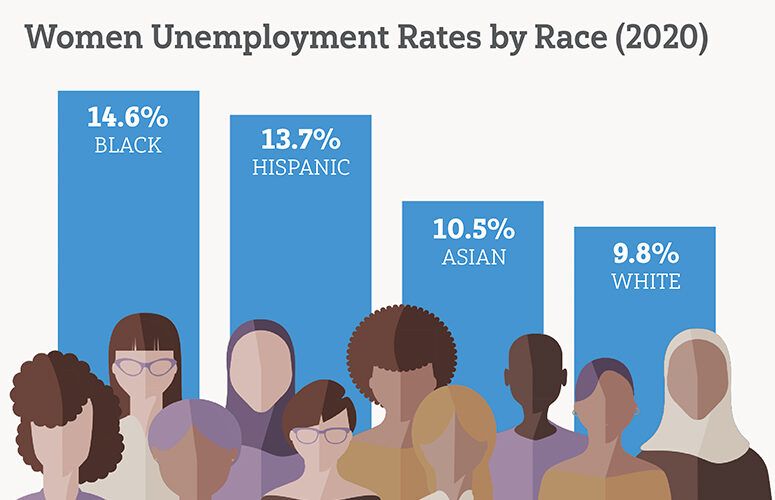 Women of color were among those most impacted by the economic consequences of the COVID-19 pandemic in 2020. Preliminary data suggests that trend continued in 2021.

As businesses were forced to close and curtail services to stem the spread of COVID-19 in early 2020, overall unemployment in New Jersey jumped from 3.8% to 16.6% between March and April. Early quarterly data from the Economic Policy Institute showed that unemployment was higher among Black, Hispanic and Asian workers than among white workers despite relative parity between the groups in the fourth quarter of 2019. Data later released by the Bureau of Labor Statistics (BLS) showed that across all four racial subgroups, the unemployment rate among women exceeded that of men in 2020.

The data from BLS is presented as an average of the unemployment rate among a given demographic group throughout the year. In 2020, unemployment among women in New Jersey was 10.8%, compared to 8.6% for men.

That year, no group suffered higher unemployment than Black women, whose jobless rate jumped from 4.5% in 2019 to 14.6% in 2020. Meanwhile, the largest gender gap within the same racial subgroup was between Asian men (6%) and women (10.5%).

Preliminary figures for 2021, released by BLS at the end of January, suggest these disparities persisted during the pandemic’s second year. Hispanic women continued to experience unemployment at a rate of 1.6 percentage points higher than Hispanic men, and Black women continued to experience the highest unemployment rate of any group at 10.3%. White men and women experienced unemployment rates of 5.4% and 5.6%, respectively. Data regarding Asian workers was not included as part of the preliminary release.

Understanding the different ways New Jersey residents are faring in the post-pandemic economy was one of the key components of a recent statistical update to Focus NJ’s 2020 Economic Review. The report, which now features fully interactive data visualizations for key economic indicators, is available by visiting FocusNJ.org.