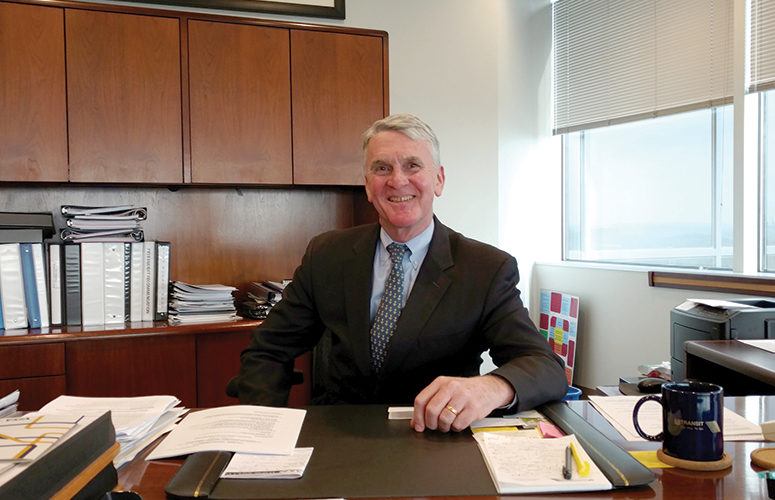 On the 9th floor of NJ TRANSIT’s headquarters in Newark, Kevin Corbett, the agency’s executive director, sees “the Super Bowl of Transportation” from his window: the North East Corridor rail line; Newark Liberty International Airport; Port Newark; the New Jersey Turnpike, and more. “This is the [transportation] backbone of the region’s and nation’s economy … when you get it right,” he says of the grand view.

Getting it right is what Corbett is trying to do after eight years or more infrastructure disinvestment at the agency. During this time period, funds from NJ TRANSIT’s capital budget were used to fund operations. “This equates to half a billion dollars a year over 10 years. Accounting for inflation, that is more than $8 billion that could have been used to buy rail cars, buses and maintaining our infrastructure,” he says.

The problems the agency has been facing are well known: the need to upgrade positive train control (PTC) systems on locomotives; aging rail cars and buses; a shortage of train engineers and bus drivers; and simply put, the need for more money and a dedicated source of funding. (It has been reported that NJ TRANSIT relies too heavily on ride fairs, which represents between 40% and 45% of its $2.2-billion operating budget).

A bus or a train can’t turn on a dime, and Corbett explains that fixing NJ TRANSIT’s problems can’t happen overnight. Yet, positive things are happening. The agency is in the process of training and hiring more train engineers. It has some 335, but a total of 400 are needed. Last month, a class of 11 completed training, but it takes 20 months of training to become an engineer. Since it takes a long time, the training initiative was one of Corbett’s first plans of action when he took office in February 2018.

In the fall of 2018, the agency ordered 113 new multilevel trains at a cost of $676 million, but Corbett explains it will take another three years for those trains to be delivered. As for buses, NJ TRANSIT has ordered 260 new vehicles (a combination of standard cruisers and longer, articulated buses), with the first batch already delivered. With 600 new bus drivers joining the fleet, Corbett says, “We are already seeing more robust service.”

All of this and more is being done while the Murphy Administration and the Legislature try to fund the agency at appropriate levels. Corbett says the agency will soon introduce a five-year capital plan, something he was “shocked” to discover did not exist when he became executive director. That will be available for the next budget planning cycle. As for the current fiscal year, the state increased NJ Transit’s funding by $75 million.

How difficult is Corbett’s job in overseeing one of the nation’s largest and busiest mass transit systems? Governor Murphy has said on many occasions that he will fix the agency even if it kills him. “My goal,” Corbett says, “is to make sure it doesn’t.”