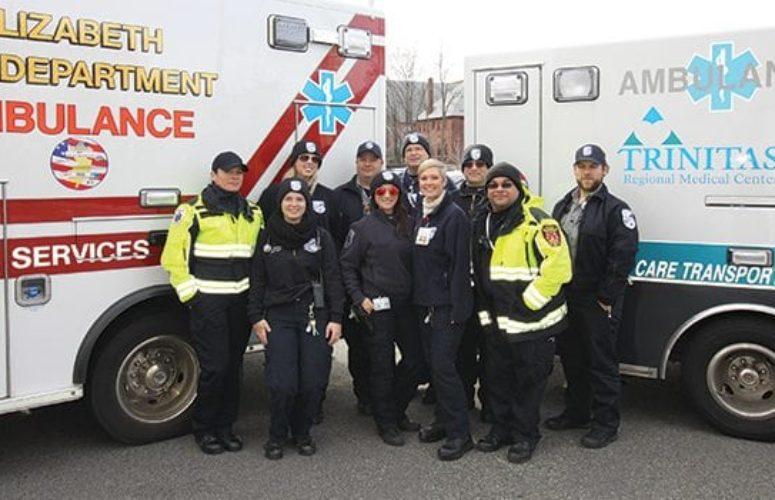 Trinitas Regional Medical Center’s Mobile ICU in Elizabeth earned recognition from the American Heart and Stroke Association for its speed and coordination in moving cardiac arrest patients from their homes to the emergency room.

Healthcare quality in New Jersey continues to rank among the best in the nation, according to federal and state quality data and independent report cards from organizations such as Leapfrog Group. New Jersey tied with Massachusetts for the third most hospitals (10) on Leapfrog’s list of 109 Top Hospitals in the country, behind California (14) and Florida (13). The American Hospital Association recognized the performance of the state’s hospitals by giving the New Jersey Hospital Association (NJHA) the Dick Davidson Quality Milestone Award for leadership and innovation in quality improvement.

The recognition New Jersey hospitals garnered in 2017 reflects their success in addressing national healthcare concerns such as patient safety and satisfaction while in the hospital, the aging population, and reducing the number of pre-term births. They also reflect national trends including the growth of community-based healthcare facilities to reduce hospital visits for ambulatory care and healthcare costs.

Over the past five years, New Jersey hospitals have worked with the NJHA under the national Partnership for Patients project to avert more than 77,000 patient complications, saving more than $641 million in healthcare costs, according to NJHA President and CEO Cathleen Bennett, an attorney who left her post as state health commissioner in September to lead the association.

“We saw New Jersey hospitals improve year after year in the state’s annual Hospital Performance Report, which measures indicators like infection rates, patient outcomes and patient safety measures,” Bennett says. “The improvement is a testament to the statewide collaboration among health providers. It really is a strong and indelible part of our healthcare culture.”

New Jersey garnered the second-best rate nationwide in reducing hospital readmissions and scored 11th nationally in the Hospital Safety Score from the Leapfrog Group, a national nonprofit organization endeavoring to drive up the quality and safety of American healthcare. It’s not just hospitals, however. Today, New Jersey boasts a far greater percentage of five- and four-star-rated nursing homes than the national average, Bennett says.

“This clearly is good news for patients, but it’s also important for our employer community. It helps reduce healthcare costs overall because good quality care equals high-value care,” she says.

Hackensack Meridian Health garnered “A” grades from Leapfrog for four of its hospitals, as well the top five-star ratings from U.S. News & World Report for its nursing homes and rehabilitative care facilities.

“From Hackensack Meridian Health’s perspective, the recognition is meaningful to consumers and physicians we recruit,” notes Robert C. Garrett, co-CEO of Hackensack Meridian Health. “I believe about 100,000 people visit the U.S. News website a day and three out of four are consumers. It’s a great tool to recruit superstar surgeons and physicians. It’s not about the ranking, though, it’s about the outcomes. Quality is ingrained in our culture.”

The awards reflect Hackensack Meridian’s commitment to the continuum of care that follows patients as they age and reaches them where they live with about 150 locations (including nursing homes and out-patient treatment centers) in the community, Lloyd says, adding, “We now have community health facilities within 10- to- 15 minutes of every resident of Monmouth and Ocean counties. Our goal is to make that systemwide.”

“The awards are important because our goal is to try to reach zero harm for patients when they come to the hospital, to prevent serious errors wherever possible. If we can do that, the rest comes naturally,” says Dr. David Condoluci, chief patient safety and quality officer.

“Quality attracts quality. So, it helps us attract a higher level of doctor to our medical staff and it obviously helps us to attract patients, too.” Last March Philly.com named Jefferson Health a Top Workplace for the fourth consecutive year.

RWJBarnabas Health’s Jersey City Medical Center and Saint Barnabas Medical Center in Livingston share the distinction of being among only 59 hospitals nationwide to garner straight “A”s for safety from Leapfrog for the past six years. Leapfrog also named the two hospitals, along with Monmouth Medical Center, as Top Teaching Hospitals last year.

“The RWJBarnabas Health system has undertaken many initiatives to emphasize safe practices, including our nursing structure of providing care, use of specially-trained physicians for intensive care (ICU) patients, and the use of a bar coding system for administering medications (scan the drug, scan the patient ID for matching) to prevent errors,” according to Dr. John F. Bonamo, executive vice president and chief medical officer.

“We have had an increased focus on improving quality and safety. For many years, hospitals throughout the nation considered quality and safety to be the same, but now we understand that they must be treated differently,” Bonamo says. “Quality is providing the right kind of care, appropriate care – the right medication and therapy. Safety is ensuring that there is no harm.”

Dr. Bonamo says RWJBarnabas Health has embarked on a new systemwide safety initiative that includes training the entire staff and all physicians in the system in achieving high reliability status. “We are designing tool kits with frontline staff, managers, physicians and educating everyone in the system to ensure that we have the same rules across all the facilities,” he says.

“It all comes down to how we hire. We spend a lot of time looking at a potential employee as a person. I can teach technical skills, but I can’t teach you to be nice to patients,” Executive Vice President and System Chief Clinical Officer Dr. John Matsinger says. “We’ve taken that even a step further. We have a partnership with Ritz Carlton to work on customer service.

CentraState, an independent community hospital in Freehold that also operates an acute care facility and three nursing homes, earned an “A” from Leapfrog for its safety practices. In addition, the Manor Health and Rehabilitation Center at CentraState gained U.S. News & World Report’s endorsement as one of the nation’s Best Nursing Homes. The Centers for Medicare & Medicaid Services, which ranks hospital quality based on up to 57 measures that assess performance, safety and patient satisfaction, gave the Manor a four-star rating.

CentraState is one of just three hospitals in New Jersey to garner top Leapfrog and CMS designations as well as the Magnet Award for Nursing Excellence in 2017. The American Nurses Credentialing Center awards Magnet status to just 2 percent of hospitals in the nation.

“To achieve Magnet status, the entire organization is required to perform in a fashion that enables nursing to perform at its highest level. We’ve received the Magnet (four-year certification) for three consecutive surveys,” CentraState CEO John Gribbin says. “In terms of the direct impact on patients, it is the nurse who is there on an hour-to-hour basis. The Magnet certification is the one that whenever I go to speak to groups, I tell them you can trust the care we provide because an outside source recognizes the level of care.”

“The Beacon Award focuses on nursing engagement and policy development with a large component emphasizing nursing excellence, leadership and staff collaboration,” says Linda Carroll, RN, MSN, vice president patient care services and chief nursing officer at Saint Peter’s University Hospital. “We focus on engagement and family experience. For example, we put a camera at each bassinette in the nursery so mom or other family members can view the baby 24/7. Our performance at avoiding sepsis is one of the best in the country. We worked with a local IV vendor to redesign tubing to have fewer possible opportunities for infections at all points of access. Our staff is very proactive.”

Opioid use is also a growing concern in neonatal ICUs. “We have done a lot and are on the forefront of taking other approaches to managing pain, so the moms don’t have to use opioids,” Carroll says.

For heart attack victims, the speed with which they reach a hospital often determines the outcome. The Trinitas Regional Medical Center Mobile ICU in Elizabeth earned recognition from the American Heart and Stroke Association, which gave the mobile ICU the Mission: Lifeline EMS Recognition Gold Award for the unit’s speed and coordination in moving cardiac arrest patients from their homes to the emergency room. “The goal of Mission: Lifeline is to save more lives by connecting first responders with hospitals and other healthcare providers and creating a seamless transition of resources from home to hospital,” Director of Pre-Hospital Services at Trinitas Gerard Muench says.

Aline Holmes, who leads quality improvement work at NJHA as vice president of clinical affairs, says the organization and its members will continue to find ways to be more involved in the communities they serve.

“We are working with members to start looking at how they can be closely involved in their communities to support people who want to stay at home rather than rely on hospitalization. In our state, I still worry about disparities in care and how we address that,” Holmes says. “The population is aging rapidly. Just look at the number of patients with some form of dementia in the baby boomer generation. Warehousing them in a nursing home worsens their condition. We have to look at ways that we can keep them home and deal with their dementia.”

Reducing pre-term births will be another prominent focus in 2018. With funding from the Centers for Disease Control and the state, the NJHA will work with hospitals to address maternal hemorrhaging and maternal hypertension as well as reducing first-time C-sections.

“We are also working around opioids and pregnancy as the number of babies born with neonatal abstinence syndrome (drug withdrawal) has increased dramatically,” Carroll says. “We have to improve care at both ends of the spectrum.”