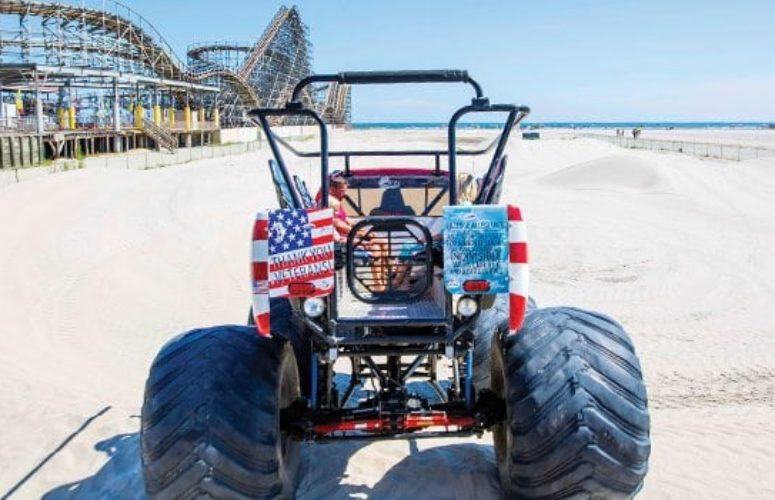 The beaches at The Wildwood.

DMOs strive to promote New Jersey tourism via an array of tactics.

A recurring theme among some New Jersey residents is a false belief that the state’s tourism landscape consists almost entirely of beaches, Atlantic City’s various offerings, wineries – and perhaps some day-trip-appropriate bucolic parks.

Yes, the Garden State has 127 miles of sandy beaches, is home to a continuously evolving Atlantic City which offers much more than merely gaming, and the state has numerous wineries and parks. Yet not all residents are aware – as just one diverse tourism example – that The Meadowlands is a migratory bird stop with more than 250 bird species on display, and that other beautiful ecotourism opportunities abound in the Meadowlands, separate and apart from infamous trackside views along NJ TRANSIT rail lines.

Judy Ross, vice president of the Meadowlands Liberty Convention and Visitors Bureau, explains, “We have birding, wildlife, nature trails, pontoon boat rides, kayaking and canoeing in this area. We actually have a slogan, ‘Birding Among the Landmarks,’ where you can be on a kayak in the Meadowlands and see the Empire State Building or the Statue of Liberty in the background.” A relatively low-cost hotel stay in the Meadowlands offers easy access to Manhattan for round-the-clock vacationing that might add to a litany of other Meadowlands-specific tourism experiences not mentioned, here.

In broad terms, it is destination marketing organizations (DMOs) that promote a great deal of tourism in New Jersey, ranging from lesser known endeavors to widely publicized opportunities.

While New Jersey tourism had aggregate record-setting revenues of nearly $42 billion in 2016, DMO funding in New Jersey has been an ongoing concern.

Ross says, “An investment in tourism is an investment in economic development. Certainly, you put a dollar in, and in some areas [in New Jersey] you get up to $12 back. We really need the state to pay attention to its assets so that we can yield better results. We are very proud of what we have done with what we have, but we could certainly do more.”

While state grants are available to promote tourism via DMOs, some DMOs bemoan they are not great enough to promote New Jersey tourism at the level they feel it should be championed. That said, grants can – and do – assist DMOs. A portion of The New Jersey Department of State, Division of Travel and Tourism’s budget is dedicated to grants, including DMO grants and Cooperative Marketing Grants.

Tammie A. Horsfield, president of Sussex Skylands/Sussex County, explains that her entity has received a state grant: “[It is] a competitive grant, since all of the DMOs have the opportunity to apply for a grant through the state of New Jersey. … We really have to lay out how we are going to spend our dollars, what we are spending them on, and show the return on investment. It is not as easy as just ‘getting a grant’; you have to make sure you are doing your homework and reaching your audiences.”

While Horsfield’s region has an assortment of tourism, ranging from golfing and skiing to waterparks and spas, its prominence as an eco-, argi- and nature-based destination has – in Horsfield’s words – “really taken off.”

She says, “The Sussex Skylands/Sussex County is fortunate to not only be a four-season tourism destination, but to offer numerous recreational, eco- and agri-tourism opportunities. More and more visitors are seeking outdoor recreational activities and nature-based experiences, which play to our strengths here in Sussex County. We have six state parks, numerous trails, cross country and downhill skiing, the Delaware Water Gap Recreation Area and numerous golf courses. We have lots of outdoor camping, hiking, biking and fishing – and more.”

Regardless of state funding levels and/or grants, each locale indefatigably strives to promote itself by implementing an array of strategies and tactics. Tom Gilmour, executive director of the Trenton Downtown Association, Inc., tells New Jersey Business, “I had a great [15-year] run [as director of economic development] in Asbury Park, and I learned a lot, which I am applying right now in Trenton. One of [the things I learned] is to bring in good restaurants.”

Gilmour explains that the arts are also being promoted in the city via establishing an arts district and with arts-related events. He explains, “[Trenton] has an amazing organic arts community – I have never seen anything like it – in the sense that there are many, many artists who live in Trenton, because it is very cheap to live in Trenton.” An arts district may have already been launched by the time this article reaches readers, and arts-related events are expanding to expose artists’ works to the general public.

In the realm of visitor-attraction techniques, technology offers new possibilities for tourism promoters. Years ago, travelers would purchase books and physical maps to assist with their endeavors, yet quantum changes have yielded destination websites, destination-specific smartphone apps and social media interactions.

Although each locale differs in its precise visitor-attraction techniques, The Greater Wildwoods Tourism Improvement and Development Authority (GWTIDA), for example, said in a statement: “In conjunction with PR efforts, the Wildwoods’ tourism impact rose in 2016 with increased website traffic, an influx of social media followers and overall strong tourism revenues.”

GWTIDA Executive Director and CFO John Siciliano reported that the Wildwoods’ tourism website at www.WildwoodsNJ.com saw positive visitor growth in 2016, with a record 2,557,482 unique visitors for a 6.1 percent increase over 2015, which increased 21.1 percent over 2014. The Wildwoods’ social media also saw an influx of followers in 2016, with 77,386 Facebook likes, a 31 percent increase over 2015.

GWTIDA’s Marketing and PR Director Ben Rose tells New Jersey Business, “We have an extremely strong digital footprint, this year. We are spending a big portion of our advertising budget on online marketing through search engine maximization and banner ads; we are serving up digital video. We are being very, very aggressive with digital marketing.”

He adds, “We had a strong social media presence to begin with; we are on Facebook, Twitter, YouTube and Instagram. We have probably more than 75,000 Facebook fans who are very active. We’re constantly ‘posting,’ and they are constantly interacting with us. That’s a strong area. We also do a lot of e-marketing. We have about 96,000 people who have requested information about The Wildwoods, and we communicate with them about what events we have going on, what’s new in The Wildwoods; and what attractions are coming. ”

All this is against the backdrop of The Wildwoods recently-unveiled 2017 Advertising/Marketing Campaign titled “As Wild As You Want To Be!”. It incorporates an array of marketing initiatives including The Wildwoods’ TV commercials, advertisement messaging and a marketing plan.

Siciliano tells New Jersey Business, “[‘As Wild As You Want to Be!’] is a play on words. We – and our new advertising agency that we hired in 2016 – feel that The Wildwoods has something to offer for everyone. Depending on the vacation that you want to have, you can sit on the beach and read a book, fish in the back bay, or …. you can [use] a jet ski or you can ride rollercoasters and flip upside down, [for example].”

New Jersey tourism has much to celebrate, and while individuals and organizations helping to promote tourism at times may encounter challenges, they strive to promote all attractions, including those that might be less well known.

Trenton’s Gilmour concludes, “A lot of people think many places in New Jersey are seasonal. But, I think the tourism industry in the last 10 years has really turned that, and showed people that most of the cities, right now, are year-round. Even if you go to the shore, there are activities going on there, all year round, right now. The New Jersey tourism industry has itself really created New Jersey as a place to be.”