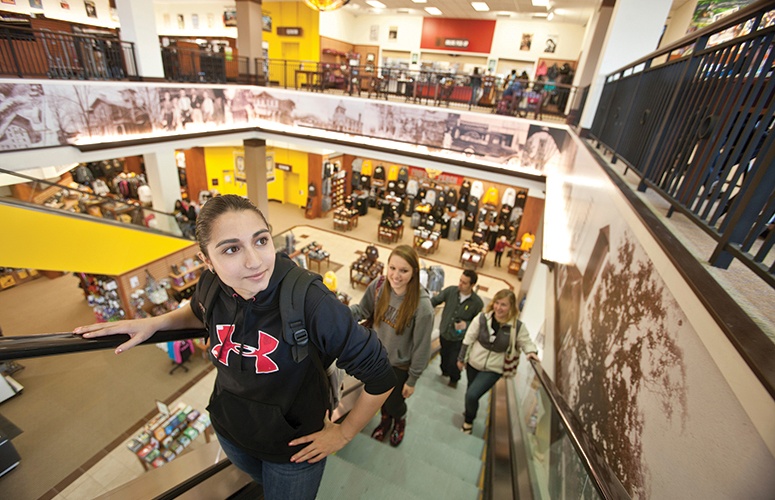 Famed author and historian Shelby Foote once said, “A university is just a group of buildings gathered around a library.” While that statement may in itself be true, there’s a lot more going on in “college towns” here in New Jersey – so that they remain competitive with colleges and universities nationwide.

One of the fastest growing urban areas in the Hudson River corridor – Jersey City – is home to Saint Peter’s University. The school was founded as Saint Peter’s College in 1872 by the Society of Jesus. Today, the university is one of 28 member institutions of the Association of Jesuit Colleges and Universities.

Meanwhile, the Jersey City-area is, in a word, bustling! “You’ll never have to say the words there’s nothing to do around here,” says Angeline Boyer, assistant director of media relations for the Office of University Communications at Saint Peters. “There’s an abundance of galleries, parks, museums, shops, shows, iconic landmarks, and sports venues right at your front door,” she says. In addition, gourmet restaurants are continually popping up on Jersey City’s chic downtown landscape.

Downtown Jersey City, also affectionately known as “Wall Street West” for its close proximity to Manhattan’s financial district, is additionally home to the corporate offices of global investment giants Morgan Stanley, Goldman Sachs and Fidelity, to name a few. “These types of employers are a draw [for] students seeking to relocate to or remain here in the Garden State following college, due to the tremendous ‘job pool’ available here.”

The New Jersey Institute of Technology (NJIT), located in Newark, has doubled its campus size over the past decade to include new residence halls, and a 190,000-square-foot Campus Center, as well as a $110-million Wellness and Events Center. “However you choose to spend your spare time at NJIT, we have the facilities to make you feel at home,” says Tanya Klein, who serves as news and media relations manager of the Office of Strategic Communications at NJIT.

Newark is widely known for its many cultural opportunities citywide and in neighboring areas (NYC is a 20 minute train ride away). These attractions range from performance spaces such as the NJPAC, and museums (the Newark Museum), to professional sports teams (beginning locally) in Newark with the NJ Devils and extending to both The Meadowlands-based NY Giants and Jets; as well as the NY Red Bulls professional soccer team whose “home field” is in Harrison. Or, you can always view a collegiate sporting event as NJIT (and Newark) are home to 19 Division I teams.

It’s interesting to mention that, more often, students are choosing to live on campus in one of NJIT’s four residence halls, a total exceeding 2,000 students in 2018, including about half of the freshman class. This trend is bolstered by the sheer convenience of campus living.

Newark is a “fun-filled” city with restaurants, shops and outdoor spaces. Some great examples include: the historic Hahne & Company Building (a restored historic landmark), which features an arts and cultural center, as well as retail space. It is also proudly home to Newark’s first Whole Foods Market; The Ironbound District, well-known for its great Portuguese culture, is home to more than 570 businesses and 170 restaurants; and Branch Brook Park, the nation’s first county park, now home to one of the nation’s largest and renowned Cherry Blossom Festivals.

Newark’s popularity as a college town destination is further enhanced by its being a major transportation hub. Newark Penn Station is 10 minutes from NJIT’s campus, and Newark Liberty International Airport is less than 15 minutes away by light rail.

“Newark may not leap to mind when naming famous American college towns, but it should,” says Peter Englot, senior vice chancellor of public affairs at Rutgers University-Newark.

“While Newark has always been a college town, the city’s progress and the depth and breadth of its educational institutions have enhanced its reputation,” says Chip Hallock, president and chief executive officer of the Newark Regional Business Partnership (NRBP).

“The city’s great diversity is also reflected in its student population with women and men from scores of countries who enjoy the proximity to the arts, entertainment, culture, dining, business, transportation and more,” Hallock says.

“For all that downtown New Brunswick offers, most students gravitate to the lively Easton Avenue corridor, which has restaurants and stores that cater specifically to student tastes,” says Neal Buccino, associate director of public and media relations, Rutgers University-New Brunswick (RU-NB). These culinary choices include everything from Chinese, Mexican and Thai food, to the usual suspects of college town fare (e.g., pizza, subs and burgers).

New Brunswick’s thriving downtown also includes a performing arts center, fine dining and many popular events, including, for example, cheering for the Rutgers Scarlet Knights or going for a swim or even playing a round of golf (GolfAdvisor recognized the 18-hole Rutgers Golf Course as a top college golf course for 2018). Also, the popular Zimmerli Art Museum is one of America’s largest and most distinguished university-based museums.

While some areas of RU-NB are nestled in a busy urban-like downtown, the surrounding region has hundreds of acres of parks and open space, providing opportunities to hike, bike and explore.

Other areas of the RU-NB campus are rural and pastoral, like the Cook/Douglass district for instance; and some are more suburban areas, like the Busch and Livingston campuses, for example. Students can live in a variety of housing on campus, ranging from traditional dormitories, living/learning residences, cooperative housing, and apartments.

RU-NB’s new mixed-use residential community, Sojourner Truth Apartments at The Yard, is designed to support the university’s developmental goals for each student, providing apartment-style accommodations to foster individual independence and self-awareness in students preparing to transition to life post-college.

Camden County College (CCC) serves approximately 10,500 students yearly, from its locations in The City of Camden, Cherry Hill, and Blackwood, respectively. Seventy percent of the student body resides within Camden County itself while roughly 9 percent are from Gloucester County, and an additional 5 percent from Burlington County; with the remainder being from other counties, states and foreign countries. CCC awards approximately 2,000 degrees each year and transfers approximately 16 percent of its students to four-year universities annually.

“Without community colleges, many students would not be able to afford a college education,” says Julie Yankanich, director of communications for CCC. “For example, in 2017, more than $18 million in grant aid was awarded to our students, and CCC also awards more certificates than schools of a comparable size.”

“Like WilmU, CCC wants to provide accessible and affordable, high quality educational opportunities for students to seamlessly transfer to four-year degree programs that would otherwise have cost them thousands of dollars more during their first two years in college,” says CCC President Donald A. Borden.

“Camden is an amazing college town,” says Mike Sepanic, associate chancellor for external relations at Rutgers University-Camden. The school’s unique location gives Rutgers-Camden students access to a plethora of entertainment and dining options right in the city, and in nearby Philadelphia – a short 10 minutes away. The Camden waterfront is home to the BB&T Pavilion, where live performances by top bands and performers take the stage. The impressive Adventure Aquarium is also along the waterfront here, as is the Battleship New Jersey.

“Throughout Camden, there’s a rising arts scene that encompasses theater, gallery exhibitions, and music performances, and Rutgers is proud to be part of that action,” Sepanic says.

Princeton’s central campus consists of approximately 9.4 million square feet of space in more than 204 buildings on 500 acres. The University owns more than 1,040 acres in Princeton, more than 860 acres in Plainsboro Township and more than 520 acres in West Windsor Township.

The charm of Princeton offers the best of both worlds. A community of approximately 30,000 residents who live on tree-lined neighborhoods, Princeton also enjoys a central New Jersey location and transit network that puts it a quick train ride away from New York City and Philadelphia.

The quality and diversity of Princeton’s restaurant scene is constantly on the rise. From noodle houses, sandwich shops and gourmet ice cream to farm-to-table fine dining, there are options for everyone.

Downtown Princeton features a wide variety of retail outlets – everything from thrift shops and fashion boutiques to bookstores and a renowned record exchange, all surrounding campus.

For arts lovers, the McCarter Theatre Center, winner of a Tony Award for the best regional theater in the country, is a campus treasure within easy walking distance for students.

“As a private developer in the academic world, we have been able to see very clearly how the advantages of private sector decision-making, planning, marketing and development allow colleges to differentiate themselves from other campuses – one of the ways is by developing building sites through a Public Private Partnership (PPP),” says Greg Lentine, director of campus housing for The PRC Group, a regional real estate owner/developer based in West Long Branch.

“Colleges, universities, and a long list of not-for-profit institutions are extending their bandwidth by embracing private equity as a source for needed facility expansions,” adds George Kimmerle, AIA, PP, NCARB, chief executive officer and managing partner of Kimmerle Group (with offices in NJ, NY and CT). “This can include administration, classroom and housing/residence halls as well,” he says.

“The typical structure in this area includes a fully funded built-to-suit with a long-term ground lease overlaid by an occupancy lease provided by the institution,” Kimmerle points out. “Options exist over lease periods for a fair market buy out and the institution may develop a fund raising/giving campaign to meet that horizon as these lease options appear,” Kimmerle adds.

“This process gives the college a brand new, state-of-the-art building at no cost, and if done properly, without effecting its bond rating or borrowing power,” Lentine says. “The main advantage to the college is that it allows it to focus on improving educational initiatives.”

“This new approach to college and university (administration and classroom) facilities planning is just gaining traction outside the residence hall setting that has been embraced for more than a decade by many at these same institutions,” Kimmerle says. Some good examples in New Jersey include Montclair State and Kean University, and others, where major residential complexes are owned and operated by outside parties.

Lentine adds, “We are also seeing a demand for flexible community space where students can meet and faculty and staff can interact with the students for educational engagement.”

Another unique public-private partnership is Rowan University’s $350 million Rowan Boulevard redevelopment project, linking the college with Glassboro’s downtown retail district while simultaneously redefining the campus and the borough. The privately funded partnership between Rowan, developers and the Borough of Glassboro has a singular goal: to create a quintessential college town.

The one-third mile corridor is lined with shops, restaurants and medical providers at street level with housing, offices and classrooms on the floors above. Key anchors include the Rowan Boulevard Apartments complex for students, a Barnes & Noble collegiate superstore and a Courtyard by Marriott hotel and conference center. Other additions in the ongoing redevelopment are:

In summary, as New Jersey’s colleges and universities continue to update/upgrade their campuses, and their surrounding towns and cities continue to redevelop and/or add amenities, Jersey’s “top notch” schools will continue to be and remain some of the most sought after nationwide.