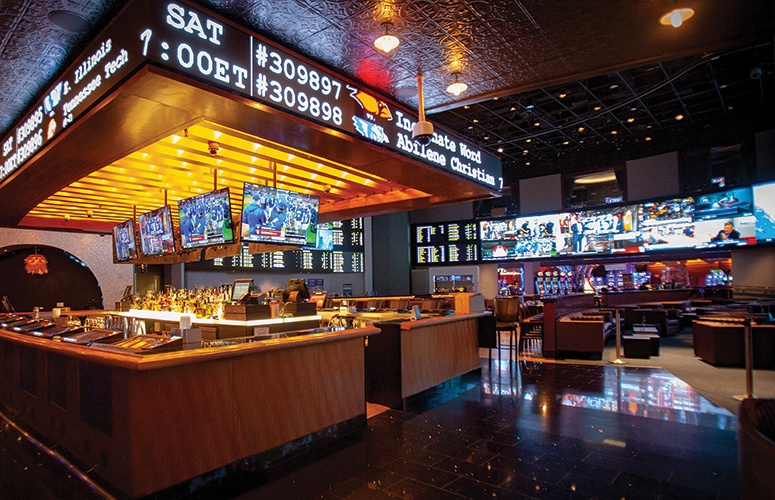 New Jersey Remains all in on Sports Betting

Operators across the state position themselves as the industry continues to take shape.

Last June, Governor Murphy placed New Jersey’s first legal sports wager at Monmouth Park Racetrack in Oceanport. This ceremoniously marked the commencement of legal sports betting in the state, but the battle for legalization had begun well before that first bet was placed.

Sports betting actually became legal in New Jersey in 2012 following voter approval of a referendum in the previous November’s election. Several professional sports leagues, however, joined the National Collegiate Athletic Association (NCAA) in suing the state and preventing the law from being implemented. Former Gov. Chris Christie spearheaded the case for seven years before Murphy took over as governor last January.

The US Supreme Court ultimately ruled that the federal law prohibiting sports betting was, in fact, unconstitutional.

“New Jersey has long been the lead advocate in fighting this inherently unequal law, and [this] ruling will finally allow for authorized facilities in New Jersey to take the same bets that are legal in other states in our country,” Murphy said of the court’s decision.

At press time, there are currently nine properties that offer legal sports betting in New Jersey. They include: Bally’s Casino, Borgata Hotel Casino and Spa, Golden Nugget, Harrah’s Casino Hotel, Resorts Hotel Casino, Ocean Resort, Tropicana, The Meadowlands Racetrack and Monmouth Park. There will be more to come as well, including Hard Rock Hotel Casino Atlantic City, which recently announced plans to launch its own sportsbook offering, both online and on-site early this year.

“I think [the industry] will be stunned,” New Jersey Division of Gaming Enforcement (DGE) Director David Rebuck said of New Jersey’s September sports betting figures, while speaking on a panel at the Global Gaming Expo in Las Vegas last October. “[The figures] will not disappoint,” he added.

The September sports betting revenue report was perhaps the most anticipated at the time of its release by the DGE, as it included the first full month of figures for most of the online sports books on the market. That report revealed the state earned $24 million in total revenue from legalized sports betting in September after taking in $184 million in wagers that month.

October’s report then revealed the inevitable nature of this industry: it is volatile. According to DGE, licensed operators took more than $260 million in wagers – a more than 40 percent increase compared to September. However, October revenues dropped more than 50 percent from the previous month, with operators bringing in $11.7 million.

This drop may be alarming at first glance, but there will always be highs and lows in the betting industry – especially when it comes to live events like sports, where upsets and unlikely results will occur. Essentially, the house won’t always win, but this is important to ensure that people keep coming back for more.

FanDuel, an online sports and entertainment company with multiple partnerships within the New Jersey gaming industry, released a statement regarding its own October statistics, and is optimistic, pointing to the continually increasing demand by bettors. “Demand for the FanDuel Sportsbook continues to outpace our expectations with online handle 2.5 times higher than September, and continued double-digit growth in retail handle. It was an exciting month for bettors who won at a high rate on football and benefitted from our industry-leading pricing and odds boosts,” the company says.

Given that the industry is still new, gaming brands in the state are continuing to secure partnerships to bolster their offerings and strengthen their hold on the market. Legal sports betting has also opened the door for opportunities that seemed unimaginable before, such as a gaming brand partnering with a professional sports team.

William Hill US became the first sports book operator to partner with a professional sports team in New Jersey when it reached a multi-year agreement with the New Jersey Devils and the Prudential Center last October.

“We are thrilled to partner with the Devils and Prudential Center,” says Joe Asher, CEO of William Hill. “With three retail William Hill Sports Books and our mobile betting app now available in the Garden State, engaging New Jersey sports fans is extremely important for us. This partnership provides us with a number of fantastic opportunities to connect directly with the passionate supporters of New Jersey’s hockey team.”

The partnership is highlighted by a physical presence within the Prudential Center: the William Hill Sports Lounge. The lounge will feature more than 20 digital screens showcasing popular sporting events and live odds – though it will not accept actual bets, as New Jersey laws limit physical offerings of betting to casinos and racetracks.

In addition to the William Hill Sports Lounge, the partnership will feature multiple in-arena signage with William Hill branding, and other features such as updated league‐wide odds, presented by William Hill, displayed on Prudential Center’s 9,584‐square‐foot, four‐story‐tall scoreboard, which stands as the largest in‐arena scoreboard in the world.

An Array of Sportsbook Offerings

For fans who want to place bets, there is an abundance of offerings both in Atlantic City and North Jersey providing unique experiences.

Being the only sportsbook near New York City has made Meadowlands Racing & Entertainment the most trafficked sportsbook in the state.

“We have put together a real atmosphere. It’s a sports fan’s paradise,” says Jason Settlemoir, COO and general manager of Meadowlands Racing & Entertainment. “It is great to see all the new faces that come into the building for sports betting. It gives our grandstand energy – you feel it as you walk in the front doors.”

Settlemoir says that the goal is to give customers choice in how they wager, be it the excitement of in-person betting or the convenience of online.

“We are looking forward to FanDuel implementing their sports wagering self-service machines,” he adds. “These will be placed on all floors of the grandstand and allow our guests to wager throughout the building. Giving our customers more ways to wager – via the FanDuel Sportsbook app, with live sports tellers and self-service machines – is key.”

The Golden Nugget Atlantic City’s new venue, “The Sportsbook,” launched in late August and boasts 2,500 square feet of space and features five video walls, more than 50 TVs, nine betting kiosks, four betting cashiers, and seating for 100, including 16 lounge chairs. In addition to The Sportsbook, the casino is also bringing sports betting to more bars and lounges on its property.

“The Sportsbook is our take on New Jersey sports betting, and we’ve made sure it offers an unparalleled experience,” says Tom Pohlman, general manager of the Golden Nugget Atlantic City, who adds that guests will be treated to an immersive audio-visual experience on the property.

“Our sports book has now become a destination for fans, with a 24-hour bar, private suites and state-of-the-art video board. People gravitate to its energy,” says Frank Leone, CEO of Ocean Resort Casino. “This has allowed us to create marketing promotions and play off other opportunities designed specifically for the sports crowds.”

“We have included state-of-the-art LIVE in-Play wagering, which allows bettors to wager on [various sports] during the events. In combination with the large high-definition screens that surround the area, people can feel like they are part of the action, which creates a fun and entertaining interactive experience,” Leone adds.

A Quality Investment for the State

“The approval of sports betting in New Jersey opened up a new opportunity for gaming in Atlantic City, and the response has garnered national attention as demonstrated by the other states that followed New Jersey’s lead in terms of approvals as well as looking at legislation to legalize it,” Leone says. “In Atlantic City, we see it bringing in a different audience of players, and that has an impact not only on revenue streams in gaming, but on food and beverage, the hotel and even entertainment. For us, it has been a quality investment and one that we value in terms of our long-term planning and business goals.”