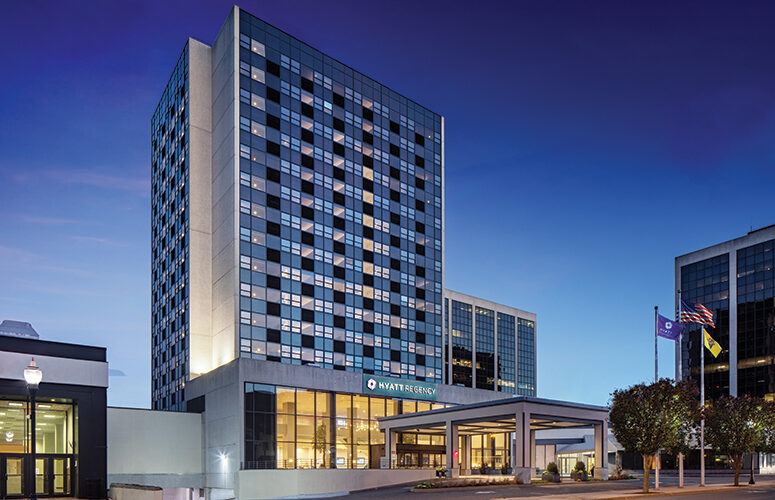 The Hyatt Regency Morristown – a centerpiece of Headquarters Plaza – is touting its major renovation of the lobby, guestrooms, food and beverage offerings, and meeting spaces with a “modern colonial theme.”
Economic Development

One of the nation’s richest counties, home to diverse industries, and offering both suburban and rural beauty, Morris County has it all.

Nestled between New Jersey’s urban centers to the east and rural counties to the west, Morris County capitalizes on its small town and suburban quality of life amenities, as it seeks to attract businesses to build on its already strong economic foundation.

The sprawling county in the state’s north-central region – home to one of George Washington’s Revolutionary War headquarters – boasts an impressive array of offerings. These include diverse parks, vast transportation connections, culture and arts, quaint towns, a well-educated and trained workforce as well as healthcare and higher-education institutions.

“The diversity of industries is key to the [county’s economic] strength,’’ says Meghan Hunscher, president and CEO of the Morris County Economic Development Corp. (EDC). “We have more economic activity here than some states do.”

Morristown is the county’s seat of government, courts and commerce, with a lively mix of businesses, culture and nightspots set near the town’s well-manicured center Green along the main thoroughfares through town.

Companies are announcing positive economic initiatives in and around downtown Morristown.

The Hyatt Regency Morristown – a centerpiece of Headquarters Plaza – is touting its major renovation of the lobby, guestrooms, food and beverage offerings, and meeting spaces with a “modern colonial theme’’ highlighting local history, Jeff Babcock, the hotel’s general manager, said in a press release.

Valley National Bank is relocating its headquarters with 660 employees to Morristown from Wayne next spring, with a new 120,000-square-foot LEED-certified modernized masonry building that pays tribute to the town’s historic structures.

“Having partnered with and supported many Morristown organizations and nonprofits over the years, we are excited to establish a permanent home within this vibrant community,’’ Ira Robbins, Valley’s CEO, said in a statement.

“Morris County is a jewel for commercial uses of all types because of its extensive highway system and pool of highly qualified, skilled labor,’’ says John Saraceno Jr., a co-founder and managing principal of Onyx Equities, in a release.

Craig Schlosser, vice president of economic development with the county’s EDC, observes: “I think Morris County has become an even more value-driven market than it originally was before because of the growth of the amenities and business opportunities that are here.”

Trends in the county include growth over the past decade in multi-family homes, as well as increased retirement community and assisted living options.

Like other areas, the county is seeing a move from office space to industrial, with some older office buildings being turned to warehouse and distribution centers near major highways. There is also significant interest in such centers for the state’s fledgling cannabis market.

High levels of education and skills among the workforce make the county attractive for employers, Schlosser says.

Approximately 56% of residents hold bachelor’s degrees, according to county statistics. Forbes’ list of the nation’s 10 top richest US counties included Morris, citing a median household income of $115,527 in a December 2021 article.

“We have a very highly educated workforce, which is extremely good in life sciences where you need to have advanced credentials to be successful,’’ explains Schlosser, noting this also allows workers to more easily transfer between industries.

“We saw people, who moved out of retail, hospitality, and travel and tourism fields, move into logistics or manufacturing because their skills were transferrable,’’ Schlosser continues. “Because we have such a highly skilled workforce, we can adapt and adjust to things.’’

The National Park Service operates Washington Headquarters Museum and Jockey Hollow Visitor Center in Morristown, which served as the winter encampment in 1779-80 for General George Washington and his Continental Army troops.

To the south is the Great Swamp National Wildlife Refuge, which was saved in the early 1960s from being a major airport by community activism and preserved for wildlife and passive recreation.

Morris County also offers convenient access for cars, trucks and trains, as well as for commercial and private planes.

The county is easily accessible for private and commercial vehicles via major interstates, I-80, 287 and 280, as well as major arteries like Routes 10, 15, 24, 46, 202 and 206. NJ TRANSIT offers commuter rail service via the Morris & Essex and Montclair-Boonton lines to and from Manhattan via either New York Penn Station or Hoboken Terminal.

Newark Liberty International Airport is less than 25 miles from Morristown, and Morristown Airport in Hanover is a general aviation facility that offers small jet flights for company officials as well as charter plane and helicopter trips. Medevac and organ transplant flights also are part of Morristown Airport’s flights.

Hospitals and healthcare services also are a key industry in the county, where, for example, Morristown Medical Center touts itself as an innovative hub for oncology treatments.

Aerospace and defense is another key target industry for the county, where the U.S. Army’s Picatinny Arsenal – a research and manufacturing facility – is located.

In addition to its workforce, Morris officials also are proud of its corporate footprint, which boasts approximately 800 corporate headquarters locations throughout the county, according to EDC’s Hunscher.

Cigna, a global health services company announced last year its move to the former Honeywell International site in Morris Plains. In recent years, MetLife Investments moved its global headquarters to Hanover; Barclays moved a large employee contingent to Whippany, while Bayer HealthCare also opened a new headquarters in Hanover within the past decade.

In 2019, Celularity Inc., a clinical-stage biotechnology company, announced consolidation of its headquarters, lab and manufacturing spaces in Florham Park.