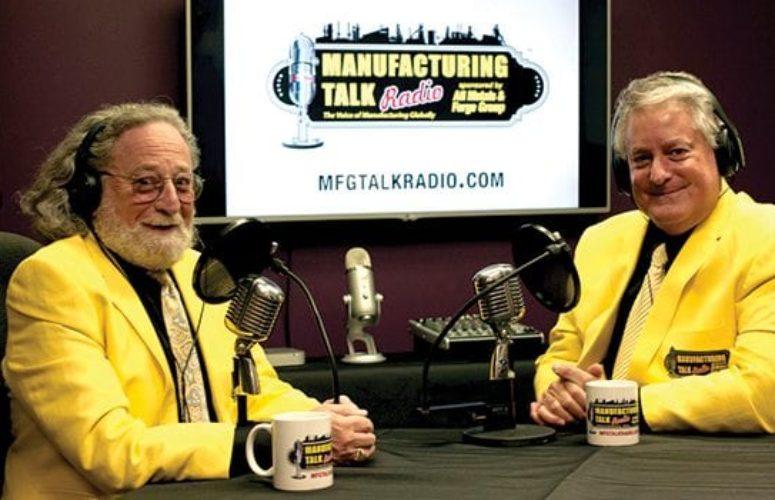 Lewis A. Weiss did not plan on becoming a manufacturing media guru when he woke up in the middle of the night more than four years ago with a vision for a radio show to promote his company, Fairfield-based All Metals & Forge Group. He simply wanted to stay one step ahead of competitors via creative marketing ideas. However, his brain child, Manufacturing Talk Radio, has turned into a weekly podcast that today boasts more than 250 shows (some live) with more than 550,000 listeners (downloads since the first podcast on November 13, 2013) from all over the country and the four corners of the globe.

The shows, which can be accessed at www.mfgtalkradio.com and on YouTube, have turned Weiss and his co-host Tim Grady into manufacturing industry celebrities, as they attend conferences and trade shows throughout the country in their “can’t-be-missed” bright yellow blazers. It may be a throwback to the days of ABC network’s Wide World of Sports, whose announcers wore similar jackets, but the branding works for MTR as the two men gather crowds wherever they go. “I’m not being braggadocios, but the branding thing is incredible,” says Weiss.

However, it’s not the looks, but the content of the shows that are winning Weiss and Grady industry accolades and support from many trade groups and their members.  A quick glance on the MTR website reveals podcasts on topics such as: industry reports and forecasts, immigration and workforce issues, education and training, technology, supply chain management, financing, sales and marketing, government regulations, importing and exporting, logistics, etc.

The MTR venture has even expanded to two other shows: “A Global Perspective” and, more recently, “Women and Manufacturing.”

“A Global Perspective” with Dr. Adriana Sanford covers international legal topics that can put US manufacturers, their executives and even their employees at risk of lawsuits, detainment, arrest, fines and severe penalties when laws of one country conflict with those of the US.

“Women and Manufacturing” made its debut this past November. The first show featured an interview with Anna Hess, who – at 90 years of age – tells her story as a Rosie the Riveter during World War II. “The point of WAM is to show that women in manufacturing are quite underutilized, and the last time they were of tremendous industry service was during World War II,” Weiss says, explaining why Hess was chosen for the first WAM podcast.

WAM’s seven female hosts (they alternate podcasts) interview leading women in the field who share their experience, encouraging other women to look at the broader landscape of manufacturing, from the loading dock doors to the C-suite and the expanse of jobs and careers.

Sitting in his studio, with vintage microphones juxtaposed with a modern flat screen monitor and other electronic gadgets, Weiss says he has learned a lot about the industry since doing his podcasts. Among the most important facts he notes is the existing skills gap in the industry, coupled with retiring baby boomers, and the myth that manufacturing jobs are going overseas. The job loss, he says, is due to new technology, which is boosting productivity, not employment.

Video will most likely be the next evolution for the show, although MTR has already taken advantage of video in a limited fashion. Weiss envisions simultaneously interviewing multiple guests at different locations via video hookups, similar to TV network news that has multiple participants on screen. He also talks about attracting advertisers to support MTR.

“Someday, this show will be daily,” he proudly predicts.

US January Manufacturing Technology Orders Off After a Strong December