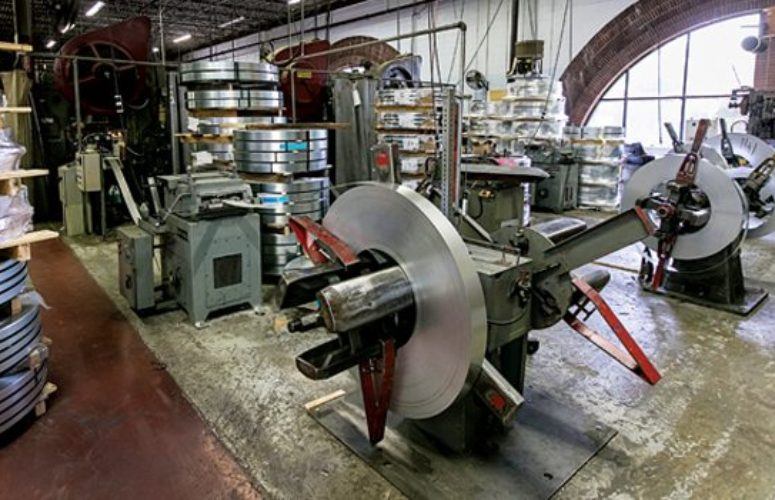 The above equipment constitutes a coil line on Unex’s factory floor.

What successes and challenges are manufacturers in New Jersey facing during an industry “bounce back?”

Manufacturing in the United States has been experiencing a resurgence over the last decade. After years of declining job figures across the nation, the manufacturing industry added nearly 600,000 jobs since 2010, according to the US Bureau of Labor Statistics. In 2013, manufacturers contributed $2.08 trillion to the US economy, up from $2.03 trillion in 2012. For every $1.00 that was spent in manufacturing, another $1.32 was added to the economy, which is the highest “multiplier effect” of any business sector in the country, according to the Bureau of Economic Analysis.

Manufacturing is also a vital part of New Jersey’s economic vitality. In 2013, New Jersey’s manufacturers employed approximately 247,000 workers, a 1 percent increase from 2012, according to the US Bureau of Labor Statistics. However, these statistics represent a decline of 34 percent since 2005, when the industry employed more than 330,000 workers. This mimics what the rest of the industry was facing across the country over the past decade.

Regarding the “bounce back,” the state’s manufacturing productivity is growing approximately 3.8 percent each year, 2.6 percent higher than non-manufacturing annual growth. Why is New Jersey’s $40-billion manufacturing industry experiencing a resurgence, and what are the successes and challenges manufacturers in the state continue to face?

“Manufacturing in New Jersey is alive and is doing well,” says Cliff Lindholm, a chair of the New Jersey Business & Industry Association’s (NJBIA) Manufacturing Network and president and CEO of Passaic-based Falstrom Company. “Over the past several decades, manufacturing has felt the effects of the economy and offshoring, like the rest of the country has. However, manufacturers in the state have found ways to remain competitive, so they have been able to keep up, not only with manufacturers from other parts of the US, but globally. That is a real credit to the strength of New Jersey’s manufacturing economy and the innovative nature of the individuals running manufacturing businesses here.”

Robert Staudinger, president and CEO of Chatham-based National Manufacturing Co. and a chair of NJBIA’s Manufacturing Network, shares Lindholm’s belief that manufacturing in the state is “strong” and “better than it was.” However, he says that the industry is different today than it was 10 to 30 years ago.

“Manufacturing in the state doesn’t have those large companies like it used to,” he says. “Now, most of the companies that are here are focused on the small niche specialties. The largest manufacturers found the business climate so costly and moved out to other locations, while the smaller family-owned businesses, that wouldn’t find it as easy to pick up and move, had to find and match the industries and markets that would allow them to remain in business. Many of the manufacturers in the state are making smaller parts that are used in other types of machines and equipment. It’s not to say that there aren’t larger manufacturers here anymore, there are just less than there were.”

“It provides an outlet and opportunity for manufacturers to get together to talk about the issues that may be impediments to them in growing their businesses in New Jersey … issues that as a single company, they may not have the leverage to voice otherwise,” Staudinger says.

What are some of the issues that manufacturers around the state are experiencing?

“Right now, the biggest issue is our inability to recruit top talent,” Staudinger says. “Members all say that positions are going unfilled because we cannot find the qualified candidates. It’s not that there aren’t enough unemployed people, but the key is finding qualified, trained and skilled workers.”

And what is being done to combat the lack of skilled workers?

For one, the New Jersey Community College Consortium for Workforce and Economic Development (NJCCC) has been providing “coordinated statewide education and training services to business and industry” since 2004, due to a partnership between the state and its 19 community colleges. One of the programs the Consortium has helped develop through the NJBIA’s Manufacturing Network is a fabricated metal/CNC machining manufacturing training program, which consists of 300 classroom and manufacturing training hours, in which participants are matched with available jobs upon successful completion of the program.

Additionally, the Consortium recently unveiled two mobile training labs “designed to train the unemployed in CNC metal fabrication and mechatronics – two advanced-manufacturing skill sets that are in high demand,” according to Sivaraman Anbarasan, executive director of the NJCCC.

“There are still a large number of people who cannot get jobs, and at the same time, manufacturers have openings that require a certain level of skill and training,” he says. “Without that, they can’t hire. Our goal is to help bridge that gap and fill needs.”

Other issues that manufacturers in the state face are higher taxes, higher energy fees, more stringent regulations and a higher cost of living than elsewhere in the country. However, John Kennedy, CEO of the New Jersey Manufacturing Extension Program (NJMEP), says, “Many of these issues are just a reality of where New Jersey is located. Being between New York City and Philadelphia and so close to main roads, railways and ports has its advantages and disadvantages.”

Just like Lindholm and Staudinger, Kennedy stresses the fact that manufacturing has changed from what it was decades ago.

“It is actually a good thing,” he says. “Today’s companies, especially here in New Jersey, are much more high-end in a sense that they are more reactive, and are more positive to change. They can take on opportunities and activities a lot quicker.”

The NJMEP is a not-for-profit that works with manufacturers in the state to help them become “more profitable, efficient and competitive.” Backed by the National Institute of Standards and Technology (NIST), it is one of 59 MEPs throughout the country that provide manufacturers with business growth strategies and assists them in implementing lean practices, transitioning into a greener business model and securing tax credits, among others.

“We act as a consultant, as a trainer, and we develop programs for manufacturers in the state,” Kennedy says. “We think we fit in very well with groups like NJBIA, and the NJCCC and compliment what they do.  We work more down on the floor of manufacturing facilities, or in the sales or shipping departments to see how we can help them improve operations.”

Since 2000, the NJMEP has provided manufacturers in the state with $1.8 billion in increased and retained sales, $285 million in cost savings, $354 million in investments and has helped create or retain 19,500 jobs.

Manufacturers in the state have been able to flourish in New Jersey and remain successful and competitive in many ways. For Paterson-based Accurate Box Company, a corrugated box manufacturer and designer, one of the biggest challenges it faced was from the 1960s to the 1990s, when the changing business climate – in which many manufacturers were leaving the country – forced the company to alter its focus, Mark Schlossman, executive vice president of sales and marketing for the company, says.

“When I joined the company in 1982, there was a plethora of toy companies in the New York/New Jersey metropolitan area, but they began to leave for China,” he says. “So, our focus changed from manufacturing toy packaging, to producing packaging for the electronics, housewares and appliance industries. But then, that industry left the US and we had to change again. We felt that it would be difficult for the food and beverage industry to leave the country, so today, that is our focus.”

Schlossman says that 80 to 85 percent of Accurate Box’s business comes from the food and beverage industry. The company now produces boxes for club stores like Sam’s Club and Costco.

In the last six to seven years, the company has almost tripled in size, according Schlossman.

“When we came to Paterson in 1983, we purchased our 300,000-square-foot facility and acquired the existing carton company that was here,” he says. “We are very proud that in the last six or seven years, we have tripled our sales and recently invested in new machinery and equipment to add to our facility.”

Over the last four months, Accurate Box has added 50 employees. Today, it has approximately 250 employees and is still growing. However, like many manufacturers in the state, the company is having a difficult time finding skilled workers to fill its needs.

Montville-based Marotta Controls, a third-generation family-owned engineering and manufacturing firm that develops pressure, flow, motion and electronic control systems designed for the aerospace and defense markets, is another manufacturer that is also experiencing challenges in “finding new talent to backfill retirees and grow new skills,” says Patrick Marotta, president and COO of the company.

Additionally, the company faces the constant challenge of developing a broad base of suppliers to support its efforts in the state. “Many of our suppliers for processes and machining are out of state,” Marotta says.

Nevertheless, the company has experienced growth in each of the last eight years based on key strategic product or technology investments.  Today, its program investment and R&D expenses routinely approach 20 percent of annual revenue.

“Our conservative growth formula has been successful and we look to continue this in 2015,” Marotta says. “We consider both organic growth and growth through acquisition in our strategic planning.”

One of the challenges that has faced Jackson-based Unex, a family-owned business that manufactures order picking solutions, has been the cost of doing business in New Jersey, in which Brian Neuwirth, president of the company, says is improving.

“It has definitely gotten better in being a manufacturer in New Jersey, and a lot of that has to do with the Christie Administration being focused on trying to improve the business climate for all industries,” he says. “But even for manufacturers, the Administration has made special efforts and that means a lot.”

Technology has also played a role in how Unex’s business has been evolving. The company is scheduled to move into a new 75,000-square-foot facility in Lakewood in 2015 and plans to have additional state-of-the-art equipment there.

“I think that keeping up with new technologies is a must, not just for us, but for any manufacturer,” Neuwirth says. “Technology has changed the factory floor and there are a lot of software and high-tech machines, so having those trained and skilled workers to operate those machines is a must.”

Unex has approximately 65 employees and Neuwirth sees that number increasing in 2015. He also sees the industry growing as a whole, as well.

“In New Jersey, the main thing we have to do is continually improve,” he says. “It would be helpful if what the Christie Administration has started is continued. … As an industry, we have been growing over the last five/six years, and I see this continuing at a steady pace. New Jersey will definitely hold its own as a good, competitive location to be a manufacturer.”