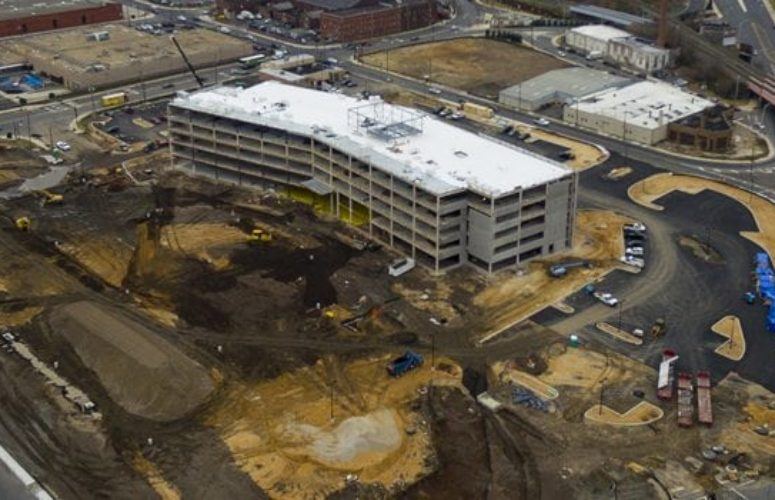 Above: Subaru of North America’s new $118-million corporate headquarters in Camden should be completed by early 2018.

A new home for Subaru in Camden. “Metroburbs” appearing in New Jersey’s suburbs. Mutant turtles in the Meadowlands (the Teenage Ninja variety). … Real estate development projects are changing the state’s landscape. And that includes much more than the commercial and residential towers rising in places like Hudson County’s Gold Coast and Newark’s downtown.

Major projects like the Gateway Tunnel initiative, addressing one of the region’s most acute transportation challenges, and the American Dream retail/entertainment complex, a much-anticipated economic catalyst, received good news in 2017. Other projects statewide, while less prominent, are equally important to New Jersey’s economic recovery, and speak to the creativity and enthusiasm of the state’s commercial real estate developers, managers and investors.

Camden on the Rise

David Fleming, vice president and department manager for T&M Associates of Middletown, says Camden is in the midst of an incredible transformation, sparked by substantial New Jersey Economic Development Authority (NJEDA) tax credits to companies committed to the city and dramatic improvements to its safety and educational infrastructure.

T&M, a nationally recognized consulting, environmental, engineering and construction management company, is providing a broad range of services to projects like Subaru of North America’s new corporate campus, part of more than $2 billion in planned or under construction new developments in Camden.

T&M has also contributed to projects like the Holtec Technology Campus on the site of the former New York Shipyard on the Delaware River in south Camden, the realignment of South Broadway (CR-551), one of the most complex roadway projects ever undertaken by Camden County, and a new 200,000-square-foot Camden County Administration office to house an array of county departments and constituent services near Camden’s waterfront.

“These are transformative projects that will help restore Camden’s glory and make the city a thriving business hub and a better place to live for the long-term,” Fleming adds. “With the current groundswell of economic and redevelopment activity, a reduction in crime and poverty, and improvements in education and housing, Camden’s future looks bright.”

In late 2015, Subaru of North America broke ground at its future headquarters site on a plot of land just off the Admiral Wilson Boulevard. The Camden location will be the new home base for Subaru’s US operations, combining four offices. In addition to the 250,000-square-foot headquarters, the company will build an 83,000-square-foot training facility.

Radnor-based developer BrandywineRealtyTrust plans to transform the entire area into a commercial hub and retail corridor (Knights Crossing), flanked by parks and bike trails. Plans for the 13-acre site include an additional 1.5 million square feet of office space, a new Port Authority Transit Corporation (PATCO) station with a plaza, a walkway to the bank of the Cooper River and a hotel for business travelers. The new $118-million corporate headquarters should be completed by early 2018. The Subaru training center is scheduled for completion in 2019.

“Metroburbs” are the future when it comes to New Jersey’s thousands of square feet of under-used office complex inventory, according to Ralph Zucker, president of Somerset Development. Zucker has been a driving force behind Bell Works, the redevelopment and reinvention of Bell Labs’ Holmdel facility, a two-million-square-foot building originally designed by famed architect Eero Saarinen. A mixed-use development, the ambitious project will generate more than 4,000 jobs as work continues along with costs already exceeding $200 million to repurpose the site.

Bell Works is one of the largest adaptive reuse projects in the region, and is well on its way to bringing thousands of jobs back to this historic facility as an entirely new “live-work-play-shop-stay” destination, Zucker states. “We call it a ‘metroburb,’ a metropolis in suburbia, and although Bell Works is extremely impactful for the region in its own right, it stands for something greater.”

“Bell Works is creating a new model for what it means to live and work in New Jersey, because it’s bringing all of the culture and excitement of an urban downtown to a great suburban location,” Zucker continues. “The state is practically flooded with boring, antiquated, outdated office buildings that are begging to be reinvented into something fresh and interesting, something that creates more than just a traditional office environment. Now that Bell Works has a demonstrated record of success, we’re bound to see more ‘metroburbs’ popping up throughout the region, which may well have a major impact in bringing jobs back to New Jersey.”

Over three quarters of the rentable office space at Bell Works has already been leased to date, and Somerset Development is fielding interest from a variety of retail users. The building has proven to be a magnet for technology-focused companies in search of vibrant, collaborative space in a comfortable suburban setting outside of the major metropolises. Industry leaders including iCIMS, Guardian Life Insurance, WorkWave, NVIDIA, Acacia Communications, Suttons International, Symbolic IO, and McCann Systems have all leased space at Bell Works.

But traditional offices are just one component. There is also expanded co-working space from vi Collaboration Hub, and a specialized co-working space geared toward design professionals, named the DesignLab. When visitors or employees walk into Bell Works’ quarter mile-long atrium, they are greeted with a new arrangement of common areas, including an expanded breakfast/lunch cafe and a local coffee roaster. Steps away from the cafe, tenants have free access to a new rooftop deck and lounge, which was completed this summer. A host of new retail options, including dining, fitness, daycare, health and wellness, and a new, state-of-the-art Holmdel Public Library, which began construction earlier this year, are expected to open its doors by 2018.

The potential for further redevelopment has drawn the interest of the state’s lending institutions. Discussing a recently announced $70-million credit for the Bell Works property, Investors Bank’s Chief Lending Officer Rich Spengler says, “This development and financing model provides the means to transform large, non-performing commercial real estate (CRE) properties into valuable economic assets, which will provide significant, long-term value to the communities involved. We are also excited to jointly finance this project with OceanFirst Bank, because this innovative repurposing of space represents the future of commercial real estate (CRE) development in our state.

“What Ralph Zucker’s company has already done and what we are financing with this loan, actually represents a new approach,” adds Spengler, “that enables New Jersey to turn a massive corner in terms of redeveloping its under-utilized facilities.”

Shaya Ackerman, managing director of Meridian Capital Group, who helped negotiate the three-year loan along with Vice President Eli Serebrowski, believes that Somerset’s plans to create a unique asset will serve as a benchmark for developers around the country. “Many have found it impossible to find the best use for underutilized suburban office campuses, but Somerset recognized Bell Works’ full potential and designed a phenomenal improvement plan,” Ackerman noted in a July statement announcing the deal. “Meridian is proud to have structured a creative financing solution that will allow Somerset to achieve its goal, and we are confident that Bell Works will completely transform the surrounding area and become a top-tier live-work-play hub for decades to come.”

The successful redevelopment of New Jersey’s numerous office complexes and corporate campuses could also help reduce the number of Manhattan-bound commuters at a time of significant infrastructure challenges for the region’s railways, in general, and access to New York Penn Station, in particular.

In July, New Jersey mass transit users received hopeful news when it was reported that the multi-billion-dollar transportation spending bill working its way through the US House of Representatives includes $900 million for the Gateway Tunnel Project, a massive effort to build new and improve existing tunnels beneath the Hudson River used by Amtrak and New Jersey Transit trains.

At the time of the announcement, Governor Chris Christie issued a statement saying, “The House DOT bill, allocating $900 million in federal funds for the beginning of the Gateway project, is a triumph for our region.”

Soon after Governor Christie’s statement, New York Senator Chuck Schumer and New Jersey Senator Cory Booker stood together in support of the Gateway Project, with harried commuters delayed by the so-called “summer of hell” construction project providing a dramatic backdrop to their plea for federal funds.

An infusion of nearly $3 billion in new funding may finally have developer Triple Five’s American Dream entertainment and retail center back on track in the Meadowlands. The former Xanadu Development, with its promised indoor ski hill and mega shopping mall, has languished on the state-owned site for more than a decade, with only sporadic work evident to passing motorists on Route 3.

As the property changed hands and direction, particularly during the Great Recession, promised jobs, plus additional new development and investment in local towns never materialized in the face of continuing delays and setbacks. However, the project’s new owner, Triple Five, the developer behind Minnesota’s Mall of America, unveiled a successful $1.1-billion tax-exempt bond sale and an additional $1.67 billion in private financing in mid-2017. The announcement got a thumbs-up from stakeholders like East Rutherford Mayor Jim Cassella and New Jersey Sport & Exposition President and CEO Chairman Wayne Hasenbalg.

Upon American Dream’s completion, now projected for early 2019, local families as well as visitors to the New Jersey/New York metro area will be able to experience what Triple Five is calling the largest indoor theme park in the Western Hemisphere at 8.5 acres, in addition to its retail component.

In the fall of 2016, Triple Five and Nickelodeon announced that Nickelodeon Universe would be joining the slate of entertainment offerings at American Dream. According to a statement issued at the time of the introduction, Nickelodeon Universe at American Dream will feature rides and attractions based on Nickelodeon’s iconic properties, including SpongeBob SquarePants, Teenage Mutant Ninja Turtles and new hits like Blaze and the Monster Machines as well as live shows, retail, games, entertainment, food establishments and themed party rooms.

“Based on the success we have seen with Nickelodeon Universe at Mall of America, we are excited to bring the No. 1 entertainment brand for kids to American Dream,” Don Ghermezian, president, Triple Five, said in the statement.

Patrick Delle Cava, business manager for IBEW Local 102, recognizes the importance of both the Gateway and American Dream Projects to the state’s economy. “With one bus leaving the Port Authority Terminal heading to New Jersey every eight seconds, with no room for expansion and all of our rail lines for both commuters and cargo already completely saturated, the Gateway project is paramount to the success of our economy,” Delle Cava states. “Not only will this create jobs for building trades workers, all the ancillary companies supplying the project with materials will thrive as well. The greatest benefit will go to the struggling commuters already plagued by an arcane, somewhat unreliable system.”

Regarding American Dream, Delle Cava adds that the long-awaited project will also bring much needed prosperity to the northern part of the state. “At 4.5 million square feet, it will employ thousands of construction personnel and create numerous full- and part-time jobs,” he concludes. “With most Meadowlands hotels at full capacity normally, hotel expansion should soon follow. Housing demands in the area will see growth as well. The economic ripple effects of this project are enormous.”