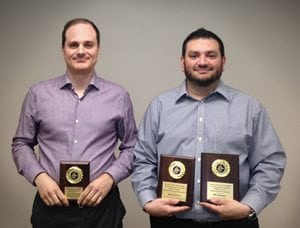 At the Association’s recent 67th Annual Memorial Journalism Awards dinner held at the Chart House in Weehawken, Managing Editor George Saliba won a third place award in the business/financial reporting category for his article “Avoiding and/or Mitigating Crises.” In the article – which was the cover story for the November 2013 issue – lawyers, CPAs and public relations professionals give small businesses advice on how to best avoid, prepare for and handle a crisis situation.

Art Director Mike Sanchez received two awards in the magazine front cover layout category. He was awarded: a first place for the September 2013 issue, which featured a design for the “Combatting Fraud in NJ” cover story; and a second place for the October 2013 issue, which featured a design for “Christie versus Buono: The Gubernatorial Battle” cover story.