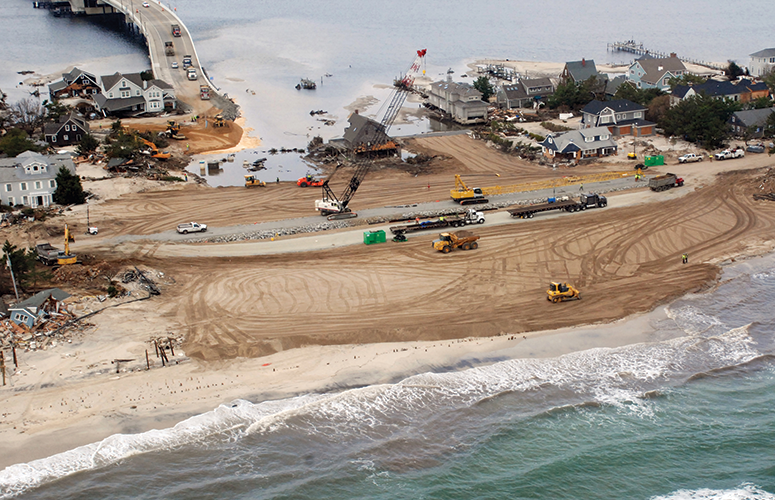 Caption The U.S. Army Corps of Engineers Philadelphia District sent a team of engineers to assist the state of New Jersey in closing the breach at Mantoloking, NJ.
Environment

Looking Back at Superstorm Sandy

Bob Martin and Michele Siekerka, former NJDEP commissioner and deputy commissioner, respectively, recall being in the eye of the storm as the state marks the 10th anniversary of Superstorm Sandy.

October 29th marks the 10th anniversary of Superstorm Sandy. Labeled the most devastating storm to hit New Jersey, the tempest resulted in 38 deaths and estimated damages of $37 million. In its entirety, Sandy passed through 21 states, creating more than $70 billion in damages, and killing more than 125 people.

In looking back at the catastrophic event, government leaders who were responsible for making sure the state’s infrastructure systems, such as water treatment facilities and electrical systems, were up and running, as well as leaders from the US Army Corps of Engineers (USACE), who were responsible for getting billions of gallons of water out of flooded transportation tunnels, removing destroyed homes and other debris from shorelines and back bays, and who immediately began rebuilding beaches along the coast, tell their stories of devastation, quick action, recovery and lessons learned.

The state, as well as USACE, thought they were somewhat prepared to face the storm, due to systems put in place in the aftermath of Hurricane Irene the prior year. However, Sandy was different. What started as a tropical depression off the coast of Nicaragua on October 22, turned into a “Frankenstorm” as the hurricane, heading north to our region, collided with a cold front heading east and a high-pressure storm heading south, making Sandy linger in the New Jersey/New York area. Its hurricane status was reduced to a tropical storm when it combined with the cold front, but nevertheless, wind gusts of 90 miles per hour were hitting the state by Monday, October 29. Add a full moon to this cocktail mix and Sandy was creating 14-foot-high storm surges.

“A week before the storm, we were already holding planning sessions with the governor and all other cabinet department members at the Regional Operations Intelligence Center (ROIC),” recalls former New Jersey Department of Environmental Protection Commissioner Bob Martin. “We knew the storm was going to be big and extremely slow moving, but we didn’t know how pervasive the water was going to be in the tidally driven areas of the state.”

Martin and his staff were hunkered down at the ROIC while the storm was wreaking havoc not only on the coastline, harbors and inland waterways, but deep into the state as winds were knocking down trees and power lines, resulting in more than 2.6 million homes and businesses without energy (power was out for days in some towns, while others experienced outages of a week or more).

As Martin was getting reports of the devastation, he says his first responsibility was to make sure the state’s water infrastructure, including wastewater treatment facilities, were operating.

Assisting Martin in this mission was New Jersey Business & Industry Association President and CEO Michele Siekerka who, at that time, was assistant commissioner for water resources at the DEP (she would later become a deputy commissioner at the department).

The DEP had to deal with some 70 water supply facilities and 100 wastewater treatment facilities that were in distress. The biggest problem was at the Passaic Valley Sewer Commission’s (PSVSC) 140-acre plant, situated near the confluence of the Passaic River and Newark Bay, which was completely underwater. Rather than have existing wastewater flow into city streets or backup into people’s homes, the DEP made the difficult decision to release the waste into the river.

For the entire first week immediately after the storm, Siekerka was on the phone contacting all of the regulated water systems to see if they had or needed generators and diesel fuel in order to continue operations and avoid more situations similar to PVSC.

She recalls a point in time at the ROIC when Commissioner Martin was up in Governor Christie’s “war room” while Siekerka was elsewhere in the facility. “The commissioner asked me via text message how many gallons of diesel fuel I thought the state needed because the governor was about to get on the phone with President Obama to make the request. Literally, I hunkered down in the corner of a hallway and the commissioner and I arbitrarily came up with a number based on what we could gather from all the information we were collecting. … That was the intensity of the moment,” Siekerka recalls.

“It was hundreds of thousands of gallons that we were trying to muster together. Then we had to track the delivery trucks, their arrival times, and where we had to dispatch them based on critical need,” she says, adding, “I became the center of all things diesel, which was crazy.”

Meanwhile, Martin recalls the helicopter ride he took the day after the storm, surveying the extent of the devastation along the coast. “It was the most surreal flight I ever had in my life. Homes and beaches were completely wiped out. Houses and cars were in the water, while boats were up on land,” he says.

By the end of the week, Siekerka was in a New Jersey American Water vehicle taking an infrastructure tour to survey the damage in order to request money from the federal government, which was getting ready to provide emergency funding via the appropriations process.

“We were driving down what would have been Route 35 in Mantoloking, but the road didn’t exist anymore. The area looked like a war zone. The national guard was everywhere. I thought to myself, how is this ever going to be straightened out?” she says.

Yet, things did get straightened out. Siekerka said the DEP created some 20 different programs to help people rebuild. This included Sandy Elevation Grants to assist homeowners with raising their homes to comply with FEMA flood maps. There was also the Blue Acres Acquisition Program, in which the state acquired properties that repeatedly sustained flood losses. The DEP also partnered with the U.S Army Corps of Engineers to advance beach and dune construction projects.

According to Joseph Seebode, deputy district engineer and chief of programs and project management for the USACE’s New York District, the agency placed some 16 million cubic yards of sand back onto New Jersey and New York beaches not just to return them to their original conditions, but thanks to the federal Sandy Supplemental Relief bill, add more sand to reduce the risk of further beach loss.

What Stephen Rochette, public affairs officer, USACE, Philadelphia District, stresses regarding shore replenishment is the importance of dunes. He points to Long Beach Island (LBI) as a case study. “LBI is 14 miles long, but dunes were only built in three sections of the island. After Sandy, the difference between the areas with dunes vs. those without was staggering. The dunes greatly reduced damage to infrastructure, homes, businesses and roads, etc. In the areas without dunes, homes were literally ripped off their foundations,” Rochette recalls.

The importance of dunes was just one of the many lessons learned from Sandy. Another was the importance of leadership during a crisis. “Leadership matters,” Martin says. “We were fortunate at the time to have Gov. Chris Christie at the helm. He led by example and made sure we were out in front of the challenges. Additionally, the caliber of mayors and other local officials mattered. Many stepped up to make sure things got done.”

Siekerka learned that, in a crisis, “one needs to build a team with lightning speed and get everyone on the same page. To do that, you have to build trust. I did that by never leaving my team alone in the bunker (ROIC).”

Martin adds, “I was very proud to be with a lot of hardworking cabinet officers, and my staff at DEP – some 3,000 people – really focused on how we could recover from the storm. … It was a great place to be.”

USACE’s Seebode would like to believe that another storm like Sandy would have less of a long-term impact on the region. “We will still see the devastating short-term impacts of storms, but everyday there is more resiliency. We are going to be stronger as we move forward.”