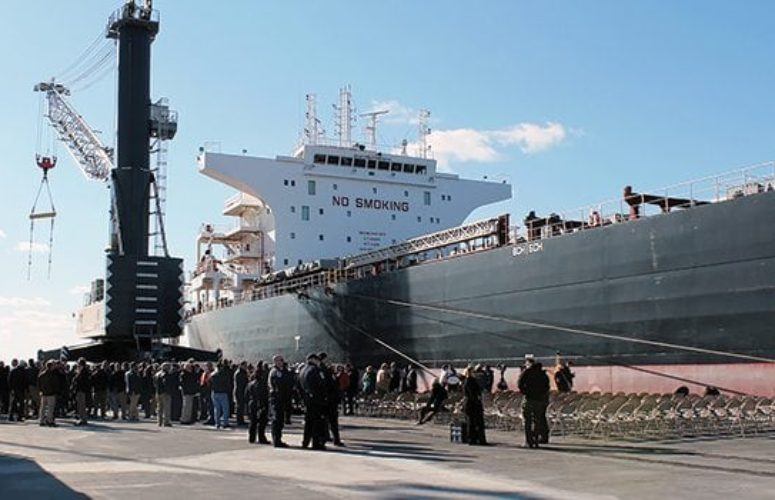 On March 2, hundreds of individuals gathered at the new Paulsboro Marine Terminal in Paulsboro, New Jersey, to welcome the first vessel, The Doric Warrior – which was carrying steel slabs destined for processing plants in Western Pennsylvania and Indiana.

A Look at Trade and Transportation

New Jersey’s transportation, logistics and distribution (TLD) web is both complex and expanding, fueled in part by consumer confidence and e-commerce.

It arrived on September 7, was the length of four football fields, and carried more than 14,000 trailer-sized containers.

The T. Roosevelt was the largest vessel to ever visit the Port of New York and New Jersey – or the East Coast, for that matter – and its docking was perhaps the penultimate result of the raising of the Bayonne Bridge to accommodate such massive cargo ships. The visit invokes not just international trade and expansive globalization, but the underlying consumer confidence that has, in part, steadily been increasing United States’ imports. And while such Post-Panamax ships, as they are termed, increase efficiencies and showcase modern engineering marvels, the rapid delivery times that today’s e-commerce companies promise consumers is yet another component in an intricate system that includes: cutting-edge distribution centers, environmentally-friendly trucks, and computer systems that can track the movement of goods more effectively than ever before, for example.

The often-empty trucks that arrive at the Port of New York and New Jersey can be an endless stream that transports its load to distribution centers in the state, where twenty-foot-equivalents (TEUs) are unloaded, and – if it is a modern distribution center – where racking may rise nearly 40 feet in the air, dwarfing humans. Products may remain perched until they are moved yet to other trucks and destinations.

And it is not just TEUs and imported cars that are arriving at our shores; ports in South Jersey have also expanded, and are noted for their specialization in break and breakbulk cargo, and for foods that travel far from New Jersey, feeding citizens across a wide swath of the country.

Yet, no system as complex as New Jersey’s transportation, logistics and distribution (TLD) sector is so simple: An additional statewide rail network moves goods via the engines that pull them, and goods demanding rapid delivery and/or careful handling enter and exit Newark Liberty International Airport in a 24-hour roar.

Although international trade has lined the very fabric of our region since before the founding of this country, a confluence of the above-mentioned factors has led commercial real estate leaders such as Michael Markey, executive managing director, Colliers International, to tell New Jersey Business, “In New Jersey, as a total, we are at all-time record highs in terms of lease rates and sale values. In the 30 years that I have been involved in the industrial [real estate] market here in New Jersey, we’ve never seen numbers as high as they are right now. It is shocking for people who are coming out of leases they have been in for a long time. If they are not really tuned into where the market is, it is ‘sticker shock’ when they start to look [for new facilities].”

Jules J. Nissim, executive managing director, Cushman & Wakefield, explains, “You have got consumer confidence, population growth, and the urbanization of where people are flocking to today. Then, there’s the Post Panamax ability, at this time. We are seeing an increase in imports, just by virtue of fewer ships, and more products coming in on the respective ships, to support all of that.”

As for South Jersey, Leo Holt, president of Holt Logistics Corp. in Gloucester City, says, “Wide expanses of land available for distribution centers is where you are seeing a very rapid outgrowth of distribution centers, in places like [Logan Township] and Vineland, and places like this (Gloucester City). The overall diagnosis and prognosis for this region is excellent, as it relates to both the e-commerce driven mega distribution sites as well as the cadre of people available to work in them. You can be in any cornfield you like in the middle of Omaha, but if you don’t have people there who want to work, who have a good work ethic, and are used to hard work, then you’re getting nowhere. And we have all of [those good attributes] here in New Jersey.”

Regardless of the various TLD jobs, there are many long-term career-advancement opportunities, and, as Gale Tenen Spak, PhD, associate vice president, continuing professional education, New Jersey Institute of Technology (who is also principal investigator for the Advanced Manufacturing, Technology and TLD Talent Network), says, “The [TLD career] force is going towards real, true, career pathways, so no one is stuck in a dead-end job, in a warehouse, fulfilling orders.”

There are indeed deeper technologies that lubricate the wheels of commerce. Distribution centers are driven by software that tracks goods; and radio-frequency identification (RFID) technology has embedded itself into certain aspects of the TLD sector, ensuring, at times, safety and reliability. Whether it is moving fruit, cocoa beans or TEUs, again, the sector beckons trained workers, who are projected to be increasingly critical to its success.

A more panoramic view reveals that while the United States has been reshoring manufacturing jobs, and it still remains the world’s largest manufacturing country, the Port of New York and New Jersey is largely an import locale. In fact, when an empty TEU is returned to the port from a distribution center, it may be repurposed rather than sent back empty to its overseas origination, the latter which might be more costly than constructing a new TEU. The “tiny homes” movement in the United States, for example, as well as necessary housing in other countries, may both employ empty TEUs.

And just as the TLD sector has its broader dynamics, it is also comprised of an array of sub-dynamics and analyses. For example, Colliers International’s Markey explains, “We have seen a pretty big influx of primarily Chinese companies that had established facilities on the West Coast and they were setting up e-commerce models. They had been [reaching] the East Coast markets through third-party logistics (3PL) providers. But, now that their businesses are taking hold, they are dropping the 3PL providers here in New Jersey and opening up their own facilities in the state, to run themselves. That was always part of the plan; they just had not been ready to do that, before. We are seeing a lot of deals, now, exactly like that.

Overall, from her vantage, The Port of Authority’s Rooney concludes, “Containers are moving 95 percent of all the goods and products that we use, wear, sleep in, sleep on, the cars that we drive, much of the food that we eat, etc., is all moved by containers. So, anyone who is goes shopping on Saturday – and looks at a label, sees that it is coming from Indonesia, Malaysia, Singapore and Vietnam. It is all coming in ocean containers.”