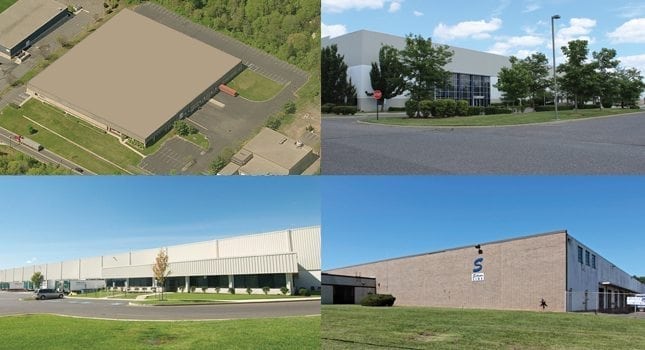 A sampling of warehouse facilities across New Jersey.

E-commerce seen as a game-changer on the real estate landscape.

New Jersey’s industrial market continues to rebound faster than other real estate sectors, with logistics being the key. The past year saw surging activity, and while there’s thirst among investors for industrial, investment opportunities are relatively scarce and institutional money is getting first call.

Certain property types – notably big box and class A – are scarce for users, and declining vacancy has been driving rents up. New Jersey has regained a competitive footing versus other destinations, notably Pennsylvania. And newer product, driven largely by e-commerce, is rapidly changing the warehouse/distribution center of the past.

“All of the submarkets are seeing good activity,” says Bo Farkas, vice president of Prologis, East Rutherford. “Q4 2013 was a little quieter than earlier in the year, but we are now seeing an increase in activity.”

One issue, in his view, is “class A warehouse space is becoming more scarce and tenants in the larger space range are having more trouble finding class A space,” Farkas says, “That’s why we’re building more.”

In the Turnpike Exit 8A submarket, “you can’t find a building of 500,000 square feet or larger right now,” says Jeff Milanaik of CrownPoint Development Group, Morristown. “Smaller sites, yes, but for bigger sites the market has gotten extremely tight.”

The market is tight “across the board,” says Marc Petrella, senior director of Cushman & Wakefield, Edison. He pegs the statewide vacancy rate at 8.2 percent, and “most major submarkets we track are in single digits.” Exceptions include Morris County (10.5 percent vacant), and Somerset (10.7 percent). “But those still aren’t extraordinarily high vacancies.”

“Anything around the port is getting activity,” says Mitchell Katz, managing director of Newmark Grubb Knight Frank in Rutherford. “Companies are willing to pay higher rents there, because with close proximity to Manhattan, transportation costs are going to decrease. High-profile companies are looking to get in and out of New York multiple times a day.”

In South Jersey, “the market is doing much better than the past several years,” says James Whitesell of Whitesell Construction Co., Delran. He pegs vacancy at 11.5 percent, and the rate has dropped because of positive absorption over the past several quarters.

In terms of investment, Whitesell notes that national real estate investment trusts (REITs) “are selling a lot of suburban office portfolios to refocus on big-box industrial.”

Also, “the flow of liquidity has changed the nature of our business,” says David Blitt, senior vice president of Bussel Realty Corp., Edison. “When I started in this business in the ‘80s, the majority of real estate was owned by individuals. Now, a large amount is institutionally owned. And there is so much cash chasing real estate.”

James Clewlow, CIO of Oak Brook, Illinois-based CenterPoint Properties, whose company entered the New Jersey industrial market four years ago, notes that “interest rates have been so low, they’ve been a real boon for investing in industrial. Rating New Jersey’s industrial market just behind number one Los Angeles in terms of strength, he says expectations of higher interest rates raises the question of whether industrial and economic demand will keep pace.

Key recent sales include Hampshire Cos.’ acquisition, for one of its core funds, of the 989,200-square-foot, 28-building Fairfalls portfolio straddling Fairfield and Little Falls from Prologis, in a transaction arranged by Cushman & Wakefield. “We look for long-term leases, credit tenants and solid in-fill locations,” says Robert Schmitt, principal of Morristown-based Hampshire. “Historically, we have had trouble finding that kind of product at cap rates that make sense, because so much capital is flowing toward the same markets.

“What made this compelling was the diversity and number of tenants and the proven occupancy track record – 95 percent occupied for the last 10 years,” Schmitt says. “We also liked the demographics and proximity to executive and workforce housing. Most of the tenants are smaller companies whose owners and executives want to live near where they work.”

CenterPoint, with its port and intermodal investment focus and a New Jersey portfolio now accounting for 2.5 million square feet, recently acquired a 65,000-square-foot warehouse on Harbor Drive in Jersey City, and an 82,360-square-foot fully-leased transload warehouse at 896 Frelinghuysen Avenue and adjacent 5.34-acre land lease at 60 McClellan Street, both in Newark.

“People are looking for an alternative to the stock market – another reason a lot of high-net-worth people are chasing real estate,” Blitt says.

“New Jersey industrial product will be in demand throughout 2014 and beyond,” Schmitt says. With a scarcity of land, “New Jersey is a good place to buy. We’ve looked at investments in the southeast – the Carolinas, Florida – but there are cornfields next door where another building – a ‘cheaper mousetrap’ – can be built. That doesn’t help long-term. Because of a lack of land in New Jersey, the prospects for New Jersey industrial as an investment will remain strong.”

For users, “corporations look to economize, focusing on making their operations more efficient,” Clewlow says. “E-commerce will be big because of the need for quick or same-day delivery. New Jersey benefits by being part of a 25 to 30 million person market area.”

Which broaches the subject of the 21st century warehouse – or “fulfillment center,” as many now call it, because “people are picking and packing,” Clewlow says. The result: Higher cubes, higher car parking ratios for more labor-intensive facilities, thicker floors “because they’re putting in a lot of machines.”

Flooring is also “super-flat,” says Steven Spinweber, executive vice president of The Sudler Cos., Chatham, “so they can use VNA (very narrow) racking and the forklifts to service them.” To meet demand, Sudler is repositioning its 443,000-square-foot 200 Liberty Way in Cranbury with 36-foot clear heights, 60-foot bays, and adding trailer parking and doors “to make it more competitive,” Spinweber notes.

“Years ago, loading doors were one to 10,000 square feet of floor area for a warehouse,” Milanaik recalls. “Now, they’re pushing one per 5,000 feet. They’re also taking a larger parcel of ground to accommodate trailer and car parking.”

Beyond strictly e-commerce operations, many “typical bricks-and-mortar retailers are doing more e-commerce, and their buildings are starting to feel more like e-commerce buildings,” Petrella says. “A lot of value-add services are being done inside the space.”

For Prologis, “we’re building the ‘box’ and letting tenants put the ‘guts’ into it,” Farkas says. Features being requested include T5, T8 or LED lighting, precast insulation, dock lights and certain dock packages and energy efficiency. “We’re getting requests for LEED certification.”

Tenants/users aren’t just asking for building-specific amenities. In a competitive market, incentives are another factor. “Everybody’s looking to the state for something,” Katz says, noting the Garden State’s Grow NJ and Economic Opportunity Act of 2013 packages have been “particularly attractive. They’ve helped, certainly for business retention, but also for some new deals.” Recent examples, he notes, include packages of approximately $13.5 million for Liscios Bakery in Glassboro and $10 million for Stone Hard Flooring in Pennsauken.

A decade ago, “a number of companies were exiting New Jersey to go to Pennsylvania,” Milanaik notes. “Driving forces were land pricing, lower rents, less expensive labor and very robust incentive programs in Pennsylvania.” Costs have been evening out, he says, although land availability is still an advantage in Pennsylvania. New Jersey’s own incentives have leveled the playing field, and “we’re also seeing pushbacks from some Pennsylvania communities.”

Highway tolls – higher in New Jersey – have also been an issue, but the bottom line is that mileage, gas prices and distances are offsetting factors: “You want to locate closer to your final customers,” Farkas says. That’s advantageous for the New Jersey market.

“In one six-month period in 2013, we saw more build-to-suit RFPs than in several years,” Whitesell notes. “That led us to the conclusion that the word is out that New Jersey is starting to be more competitive.”

One result: A $40-million tax incentive program was enough to encourage Philadelphia-based Destination Maternity to relocate to a new build-to-suit warehouse/distribution facility in the Whitesell-owned Haines Center, which spans over 800 acres in Florence and Burlington townships at Exit 6A, and to leased offices in Moorestown.

One reason New Jersey evolved as an industrial market power was its transportation infrastructure. Is the state doing enough to maintain that competitive edge?

“The state has spent a lot of money widening the New Jersey Turnpike between Exits 6 and 8A, and that benefits logistics operations,” Whitesell says. He also notes the light rail River Line between Camden and Trenton, which includes a stop at Haines Center in Florence with a 600-car parking lot on-site. “That enables employers at Haines Center to gather a greater regional employee pool,” he notes.

“The state’s doing a good job with the infrastructure,” Petrella concurs, noting raising of the Bayonne Bridge to admit the new Panamax vessels to the Port of Newark and Elizabeth, improvements to the Goethals Bridge and Pulaski Skyway, and more.

Maintaining the road network is ongoing, and it can be difficult. “Highway construction takes a lot of time and engineering,” Spinweber says. Besides the Turnpike widening, “I don’t see enough being done on other roads in terms of capacity – adding lanes. I-287 really needs increased capacity. But I also understand it takes of a lot of engineering and planning.”

“You can never do enough,” Farkas says. “But to its credit, the state is doing a lot of good.”

And as the economy improves, it’s paying off in new construction. “The market has needed it for a while, but people were nervous about building as we’ve worked through the recovery,” says Petrella. “It’s good to see developers building product that will replace some of the older, more functionally obsolete stock.”

“For the health of the market and how investors view it, the biggest vote of confidence is when someone is actually constructing speculatively,” Farkas says.

“We see 2014 as a potential breakout year due to the tremendous amount of absorption in the warehouse category, resulting in increased rental rates and selling prices,” Blitt says.

Spinweber voices “guarded optimism. There are pockets of activity, and a lot of movement we see now is running to quality and trying to be more efficient. Heads of companies we talk to have the same thing in mind: How can I get the same productivity we had in 2007 without loading up on a lot of payroll?”

“We’re bullish on the state of the market going forward,” Petrella concludes. “Supply seems to be reasonably well contained and there is good, steady activity moving into 2014.”