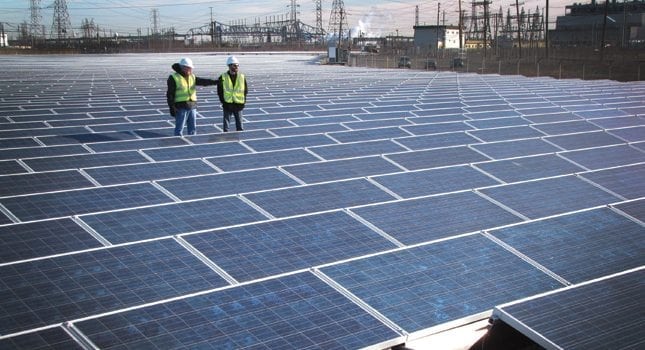 Advanced Solar Products, Fairfield, built this 3.2-megawatt, 11,000-panel solar facility in Linden for PSE&G. It is located on a former brownfield site.

From Landfills to Solar Fields

Discover the alternative use for environmentally damaged land.

Three years ago, a 3-megawatt (MW) solar “farm” on a 13-acre site in the New Jersey Meadowlands became the first solar project in the state to rise on a shuttered, state-owned landfill, signaling a new readiness on the part of developers and energy companies to locate utility-scale renewable power production on disused industrial sites.

A year later, the state Legislature embraced this redevelopment model in the Solar Act of 2012, which discourages the construction of solar installations on green acres while sanctioning the reuse of landfills and brownfields. Some of the first major projects ushered in by the new law are likely to be far larger than the few that have been built so far.

PSE&G, the electric and gas utility that owns the Meadowlands array, will embark on an even larger landfill conversion when it breaks ground on a 9 MW solar array on a 40-acre capped site in the former Parklands landfill off Route 206 in Bordentown Township. The utility has also identified the former Kinsley landfill in Deptford as a promising site for a large solar array and is currently evaluating bids from contractors to develop both sites.

To date, the energy company has also completed four utility-scale solar projects on remediated brownfield sites it owns in Linden, Trenton, Edison and Hackensack. Unlike residential and commercial units, which supply power directly to the buildings to which they are attached, the 10.5 MW of electricity generated at these and the Meadowlands sites is fed into the power company’s electrical grid.

Those installations are among the 24 projects developed under the company’s Solar 4 All program, a plan approved in 2009 by the state Board of Public Utilities (BPU) that permits the production of 80 MW of solar capacity, including 40 MW from solar farms and 40 MW from panels attached to utility poles in neighborhoods in the utility’s electric service territory.

Last May, the PSE&G program was extended to include an additional 45 MW of capacity, the vast majority of it slated for brownfields and landfills, says Todd Hranicka, the utility’s director of solar energy. The company plans to spend about $247 million over the next five years developing these installations.

Last year, the company commissioned Weston Solutions, an environmental services company, to survey 1,000 landfills in its service territory. The company ultimately deemed 22 of the sites best suited for development based on criteria such as access, sloping, shading, remediation status and legal considerations such as ownership.

“Sites such as the landfill in Deptford ranked high, because they are large, properly closed, have owners interested in solar development, are large enough for our needs, are situated near populated areas where there is a high demand for electricity and offer easy interconnection access to our grid, and are near major roads to make construction access easier,” Hranicka says. “The challenges at many of these sites are that we don’t know what’s in the ground. On the brownfield sites we owned, we knew what was there. But remediation can’t be part of the plan. It’s not the responsibility of PSE&G ratepayers to pay for remediation.”

Hranicka says he expects construction on both sites to start this year and to have both in service by mid-2015.

To merit consideration, properties must be designated a landfill or brownfield under state and federal environmental regulations, be properly closed, be able to connect to PSE&G’s electrical grid and support a solar facility greater than 1 megawatt.

“Some of these sites have been closed for many years, and landfill technology has improved significantly. Landfills that were closed in the 1970s are at risk to settle, whereas waste at newer landfills is baled and stacked, which creates a stable environment,” Hranicka notes.

“Panel technology has not changed a great deal. On average, less than 20 percent of the sunlight that hits a solar panel is converted into electricity,” he adds.

Hranicka says the utility began developing solar power, including on third-party sites through negotiated leases, to support the state’s Energy Master Plan, which calls for New Jersey to achieve a renewable energy portfolio of 22.5 percent of its electrical supply by 2021. The Solar Act of 2012 called for utilities to increase their solar portfolios to 2.05 percent by 2014, up from less than 0.5 percent at the time. That number would increase to 4.1 percent by 2028.

“The New Jersey Energy Master Plan and the Solar Act of 2012 are really the drivers of landfill and brownfield solar redevelopment in New Jersey. The Energy Master Plan called for a move to landfill and brownfield solar development and the Solar Act is what put the mechanism in place to allow properly closed landfills to be eligible for solar development in a large-scale way,” he says.

The Solar Act was also intended to stabilize the state’s solar market after a rush of new building in recent years created a glut of supply and severely depressed the price of solar renewable energy credits (SRECs), the credits issued to solar power generators by the BPU that energy suppliers buy in order to boost the solar component in their state-mandated renewable portfolio standards. A year ago, the state Office of Clean Energy announced that New Jersey had surpassed one gigawatt of installed solar power through more than 20,000 solar projects. Of those, about three quarters are residential arrays.

“Constructing solar installations on landfills and brownfields can be more challenging, but in the end it makes a tremendous amount of sense as these types of properties represent a vast untapped resource,” says Jamie Hahn, co-founder and managing director of Solis Partners, a Manasquan-based company that develops solar power installations for the commercial and industrial sectors.

“New Jersey faces unique geographical challenges with respect to large-scale solar development because of its high population density and finite amount of open land. It’s for these reasons that we should find a way to redevelop these environmentally challenged sites while, at the same time, protect our agricultural land. This is different compared to states in the Southwest, such as California and Arizona, which have vast open expanses of desert. New Jersey has hundreds of acres of brownfields and landfills that can’t be used for residential or commercial development. For these reasons, we should promote the development of clean energy generation at these sites.”

Solis Partners, which designed and built a 1 MW rooftop installation at PSE&G’s central division headquarters in Somerset, is among the New Jersey companies bidding on both of the new landfill sites.

“For the most part, the only difference between more traditional commercial solar development and a landfill installation is the level of site preparation and engineering that is involved,” he says. “The main challenge is the higher build costs for these types of projects. In addition to all the site preparation and engineering, you typically have to use a ballasted racking system rather than a pile-driven system.”

He adds, however, “I’m convinced this is the right policy, especially as the solar industry here is pushing to make the state’s energy supply fully renewable by 2050. This is a goal supported by a broad coalition of solar and wind industry groups, environmental organizations, the US Green Building Council, the League of Women Voters, churches and others. When we look into the future, we must ask the question: where do we put it all? The conclusion is that we should not be cutting into greenfields, and so roofs, parking lots and brownfields are the only places that provide a lot of space.”

Advanced Solar Products, which built the solar facilities at PSE&G’s Linden and Edison properties, is also bidding on the utility’s new landfill projects.

“There are special challenges and costs, including environmental permitting, such as landfill re-development permits. They also require maintenance and monitoring, although the solar systems can help minimize maintenance,” he says, adding, “We manufacture a mounting system specifically adapted for landfills, with ballasted racks that put low pressure on the landfill so we don’t pierce it, and to enable robust control of stormwater runoff and erosion.”

But some renewable energy companies are cautious about the possible negative impact the state’s new policy could have on existing solar projects.

“We are focused on net-metered projects, and feel the state should be pushing these,” says Jeffrey Chavkin, president and co-founder of Geoscape Solar in Livingston, which builds residential and commercial systems. “If the state continues to approve the build-out of Wall Street-backed solar farms, it will end up being at the expense of the temples, the churches, the schools and the companies in the state that have paid money to produce their own distributed clean energy. We should be looking to protect the returns of the tax-paying solar owners in this state as well as encourage the build-out of future net-metered projects.

“To clarify, I am a huge proponent of solar in any form and am very passionate about proliferating solar in New Jersey,” he adds. “The BPU has about 10 or 12 solar farms that have been grandfathered into the SREC program, which is fine. As for continued build-outs of solar farms on brownfields, it is imperative that they have their own cutout for SRECs so as not to negatively impact the SREC supply. This oversupply could potentially cause the market to crash. SREC prices were starting to come up, but this could easily push them the other way. These credits are what makes the market work in New Jersey.”