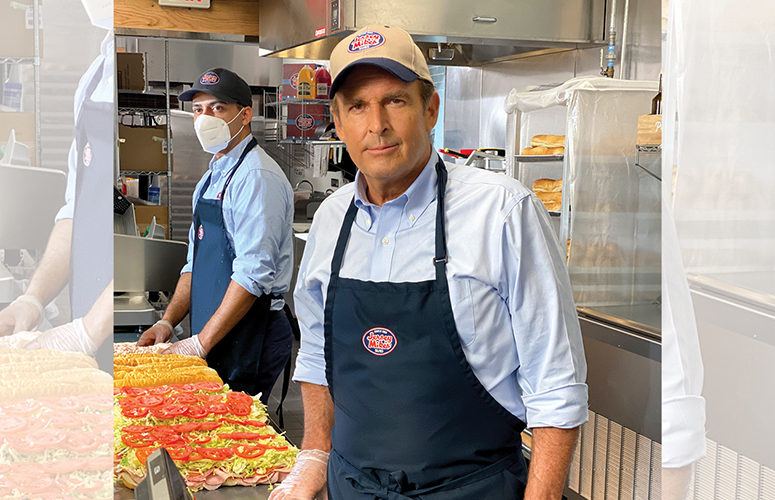 The sub sandwich franchise has grown into a model of giving.

Jersey Mike’s Subs is currently one of the most successful franchises to come out of the state of New Jersey, with approximately 2,000 locations across the country and a projected $2 billion in sales in 2020, according to Peter Cancro, the company’s fourth owner and current CEO.

The company began in 1956 as a small sub shop in Point Pleasant, and in 1971, Cancro began working at what was then called Mike’s Subs at age 14. A few years later, Mike’s Subs was put up for sale.

“One night my mother came to me and said, ‘Hey Peter, I heard the store is for sale. Why don’t you buy it?’,” Cancro recalls. “I sort of laughed and went upstairs, and it only took that one flight of stairs for a light switch to go off, and I called the owner and told him I was interested in buying it.”

Cancro was given a week to come up with enough money to buy the business, and to this day, he credits his former football coach Rod Smith for helping him secure the necessary funding to purchase the company.

In 1987, he began franchising, and ultimately changed the name to Jersey Mike’s Subs. The move set the company up to have the award-winning growth that it sees today, but Cancro adds that the company’s culture, which has stayed true since its early days, is a major factor in the company’s success.

“When I first walked into that store at 14 years old, my voice mattered. That culture is what we strive to have all across the country,” Cancro says. “Giving and making a difference in someone’s life … that is what we picked up as a mission statement as a company.”

He adds that every new Jersey Mike’s store that opens aims to partner with a local charity.

The company’s culture of giving culminates in March with Jersey Mike’s annual Month of Giving, during which customers are invited to donate to a local charity ranging from hospitals, youth organizations, food banks and more. The month of giving campaign concludes with a nationwide event known as Jersey Mike’s Day of Giving, which takes place on the last Wednesday in March, when 100% of the day’s sales are donated to a local charity.

While the company still received donations throughout March of this year, COVID-19 forced the Day of Giving event to be postponed until next year. However, Cancro predicts that proceeds from next year’s fundraiser could reach $9 million.

“Throughout this crisis, what our owners have done is incredible: donating to first responders, hospital workers, families, kids in need, and senior citizen homes that were on lockdown. … So many of the things we do, no one knows, we just sort of do it,” he concludes.

The Quest for 100% Clean Energy