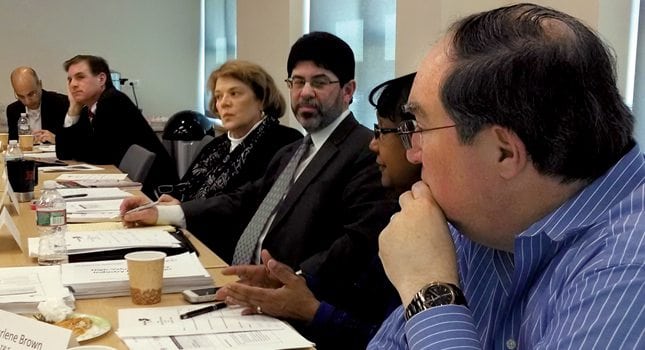 Two organizations that share a similar name also fight for same cause.

“One for all and all for one”: The motto of Alexandre Dumas’ “The Three Musketeers” and the traditional motto of Switzerland, means that all members of a group support each individual member and that each individual member pledges to support the group. Today, the phrase can be used to describe how three sectors in New Jersey have banded together to build and support the state’s innovative ecosystem. Government, higher education and the business community are discussing ways to better work together and share each other’s resources to create jobs and leading-edge technologies.

Players in this collaborative effort include Innovation NJ and the state’s Council on Innovation. Innovation NJ was formed four years ago to expand and strengthen the culture of innovation in the state. Today, its 90-plus members hail from business, academia and government. Meanwhile, the Council on Innovation was created last year by the Christie Administration as a response to one of the recommendations of the Building Bridges II report, a document prepared by Innovation NJ and the New Jersey Policy Research Organization (NJPRO) Foundation, an affiliate of the New Jersey Business & Industry Association (NJBIA). Building Bridges II serves as a catalyst to encourage academia, industry and the state to work together to meld their respective research and development assets.

The overall mission of the report and the members involved in both organizations is to enhance the state’s innovation ecosystem and affirm New Jersey’s historic role as a global leader in innovation.

The question to ask, since the debut of the report and the formation of the Council on Innovation and Innovation NJ, is: “What progress is being made in the coming together of the three sectors to spur innovation?”

According to Melanie Willoughby, co-chair of Innovation NJ and acting president of NJBIA, “There is no doubt that there have been major changes, for the better, to enhance the state’s innovation ecosystem.” Willoughby gives as an example, Rutgers University, which in its current five-year strategic plan, seeks greater collaborations with the business community. “When an effort like that is made as part of a university’s reason to exist, it is music to the ears of the business community,” Willoughby says.

Haskell Berman, senior vice president, state affairs at the HealthCare Institute of New Jersey (HINJ) and Innovation NJ co-chair, answers the same question by pointing to the merger of the University of Medicine & Dentistry of New Jersey with Rutgers and Rowan universities. “Since the restructuring of higher education in the state, we have seen much more open engagement between higher education and industry,” he says.

Secretary of Higher Education Rochelle Hendricks, who heads the Council on Innovation for the state, adds that one of the outcomes of the UMDNJ merger and the Higher Education Restructuring Act is that businesses are noticing the research capacities and collaboration opportunities at the state’s other research institutions – Princeton University, Stevens Institute of Technology and the New Jersey Institute of Technology. “So, the merger cannot be underestimated in terms of its overall impact,” she says.

Among the many ways the State of New Jersey is bringing higher education into its overall economic development plan is by adding the Office of the Secretary of Higher Education as the fourth partner of the New Jersey Partnership for Action. Formed in 2010 by the Christie Administration, it includes Choose NJ, the Business Action Center, the New Jersey Economic Development Authority and now the Office of the Secretary of Higher Education. Headed by Lt. Governor Kim Guadagno, the partnership is a public-private approach to economic development and the starting point for all initiatives, policies and efforts to grow New Jersey’s economy.

“The move to bring higher education into the partnership adds a level of coordination, connectivity and coherency that was absent” in partnership efforts, says Hendricks. Case in point was Hendrick’s and her office’s role in formalizing the venture between Moorestown-based Lockheed Martin and Rowan University in Glassboro. This past March, the two entities kicked off a strategic partnership to develop new technologies for a broad range of radar system applications in support of national defense.

As Hendricks describes it, Lockheed Martin sought to win the Aegis Combat System Engineering Agent Contract from the US Navy. “Because we were at the table at the very start with Lockheed Martin, we could talk about what schools like Rowan, NJIT, Stevens, Gloucester County College and Princeton could do well that was cutting edge and that could potentially help Lockheed Martin compete for the Aegis grant. The result? The US Navy has awarded the company a 5-year, $100 million contract. Research work with Rowan will be conducted at the university’s South Jersey Technology Park in Mantua Township.

Still, when asked what are among the existing challenges in bringing business and academia together, Willoughby says it is the issue of the state promoting what its higher education institutions have to offer. “We have institutions of higher education that conduct great research and receive a lot of federal grants, but a lot of companies in New Jersey and around the nation are unaware of all that we have to offer. … We think that will be part of our continued work,” she says.

Already, the asset management action team within the Council on Innovation is trying to rectify the dilemma by creating what Hendricks describes as a “true searchable, user-friendly, one-stop-shop data base that businesses can access to see the current assets our institutions of higher education have to offer.

“At its core, it will identify the key resources at our institutions, specifically what they are researching, who some of the leading faculty members are in particular fields, recent funding, incubator space, what research has been commercialized … it’s an array of things we think business and industry would like to know,” Hendricks says.

When comparing what New Jersey is doing to build its high-tech sectors with other states, Hendricks says, “I think we are playing catch up. The good news is we will see some exciting things coming out of the Council and Innovation NJ. There are certain things we are queuing up pertaining to inter-agency collaborations and partnerships that will break through the barriers that have existed in New Jersey. It will reposition us to be a global leader in innovation. It will be a true system that will put us ahead of places like Massachusetts.

“I look back at the period of time when everyone was encroaching on what had been New Jersey’s territory. We want to regain that foothold. We are going to do everything we can to make sure the state is at the top in terms of global competition. We have the wherewithal to position ourselves accordingly.”