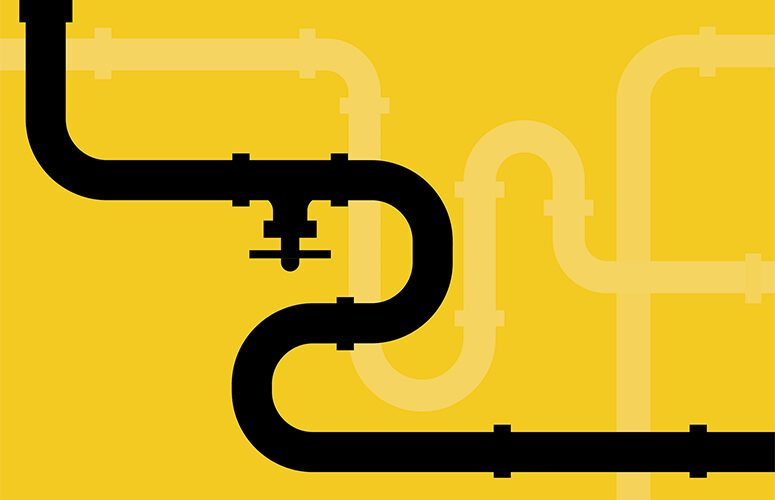 New Jersey Business Magazine presents its final report of a two-part editorial project that looks at the impact of the $1.2 trillion federal Infrastructure Investment & Jobs Act (IIJA). Last month, we dedicated an entire feature to the transportation sector. This month, we look at the state’s water and broadband needs.

Federal government money is coming in what many are calling a once-in-a-generation investment in the nation’s infrastructure. On the transportation side, state agencies are expected to receive a combined $12.3 billion over five years to repair, replace and expand roads, bridges, rail lines, ferry facilities and mass transit systems, and install electric vehicle charging stations.

On the water side of the equation, New Jersey is expected to receive $1 billion over five years to improve infrastructure and ensure clean and safe drinking water for all communities.

“This money is absolutely needed, especially in New Jersey,” says David Zimmer, executive director of the New Jersey Infrastructure Bank (I-Bank). “Like every other state in the Northeast, we have very old water systems that have reached their useful lifespans. That is why you see so many emergency repairs happening. This money will go a long way towards helping communities get back in front of efficiently running their systems instead of reacting to problems.”

The I-Bank is an independent state financing authority responsible for providing and administering low-interest loans to municipalities, counties, regional authorities and water purveyors in New Jersey for the purpose of financing local transportation and water-quality related infrastructure projects. This is done under two separate financing programs: the NJ Transportation Bank and the NJ Water Bank.

Zimmer explains that the IIJA funds for water projects will go into the State Revolving Fund (SRF), which is the traditional process for expected federal monies. In the SRF process, planned water projects, based on applications from municipalities (for example), go through technical reviews and are rated. The New Jersey Department of Environmental Protection (DEP) then develops an intended use plan (IUP), with a 30-day public comment period for feedback. The DEP then submits the IUP to the federal Environmental Protection Agency. Once the EPA gives the IUP its approval, the DEP can start submitting grant applications to the EPA. Then, the actual funds should start flowing in as low interest loans, zero interest loans or grants (termed principle forgiveness).

Because the amount of money this year will be significantly larger due to the IIJA, Zimmer explains that NJDEP Commissioner Shawn M. LaTourette designed and implemented the Water Infrastructure Investment Plan (WIIP) to magnify the outreach and education of the IUP process. This includes the creation of a website – www.nj.gov/dep/wiip – where municipalities, government officials, consultants and disadvantaged communities can access instructional webinars and videos.

As mentioned, $1 billion of IIJA money will be used for various water projects. Combined with existing SRF money, there will be a total of $1.42 billion available over five years. Then, the I-Bank will turn around and match this money with bond funds for a combined total of $3 billion being made available over five years. “On an annual basis, this is between $500-$700 million, at a minimum” Zimmer says.

For an investor-owned water utility like New Jersey American Water (NJAW), President and CEO Mark McDonough says that while the IIJA money is certainly needed, his company is already planning to invest $1.8 billion of its own money in the state over the next five years. “It’s more than the federal government,” McDonough points out. On average, NJAW has been investing $400 million annually in New Jersey, serving 190 communities.

As an investor-owned utility, McDonough says only a small portion of IIJA money will be available to NJAW. This will probably be provided for lead service lines because of legislation signed by the governor last year that requires public community water systems to inventory and replace lead service lines within 10 years. This legislation provides for recoupment of costs by investor-owned public water systems.

Overall, McDonough hopes that NJAW will be a resource to the municipalities it does not already serve if the infrastructure money they receive is not enough for their water-system issues.

It’s About the Ecosystem

According to George Kimmerle, founding partner of The Kimmerle Group, the Harding Township-based architectural and planning firm, the water infrastructure issue encompasses the entire ecosystem, and that includes land development. Though there is much talk about lead service line replacement in the IIJA, Kimmerle stresses there are other issues that need to be taken into account, such as the quality of surface water flowing into reservoirs, aquifers and wells, in addition to flooding issues.

“You have to look at the larger issue of what is happening, from a development point of view, across the state,” Kimmerle says. “In terms of individual towns, there are natural areas and developed areas. We have to understand the relationship – and the buffering and bordering – that needs to go on between the two to ensure that each is a survivable ecosystem.”

A recent survey Kimmerle conducted with the US Mayors Association of 1,320 communities nationwide, revealed that mayors also understood that infrastructure funding must go towards flood control. “Areas like Hoboken and Lower Manhattan need flood gates or some type of physical barriers,” Kimmerle says. “The mayors understood that controlling development in these types of areas has a direct impact on what kind of flooding occurs upstream.”

The IIJA is also providing $65 billion nationally toward internet deployment and affordability efforts, of which New Jersey is expected to receive a minimum of $100 million. According to a White House press release, there are at least 115,468 people in the state who lack internet access, and 18% of the state’s population, or 1.56 million people, will be eligible to take part in the FCC’s Affordability Connectivity Benefit (ACP) program. The ACP was originally called the Emergency Broadband Benefit program and was created in response to the need and importance of connectivity during the COVID-19 pandemic. Under the ACP, low-income households can lower their internet or wireless costs by up to $30 per month.

Nationwide, AT&T has been a participant in the program, and according to Joseph Divis, AT&T New Jersey president, the state is well situated vis-a-vis some other states regarding broadband availability.

The other side of providing broadband access to those who do not have it is the digital literacy and equity component, Divis says. “With all the work to make sure broadband is readily available and affordable, you have to make sure residents and families are able to use the technology,” Divis explains. “That is something we are already working on with the AT&T Connected Learning Initiative.”

Through this $2 billion national AT&T program, the company is educating users via digital navigators; people who support and instruct local individuals on new technologies.

According to Divis, AT&T has a robust history in making investments in New Jersey. For the three years ending 2021, the company invested $1.2 billion in the state. “This is part of the reason why New Jersey is in a good place to take the journey towards universal broadband,” he said.

Divis looks at public/private partnerships as ways of putting federal dollars to good use as telecommunications companies such as AT&T have a long history of investing and putting capital to work in providing robust broadband connectivity.

At Matrix New World Engineering, the national and global engineering firm with New Jersey headquarters in Florham Park, Andy Raichle, PE, vice president, says the firm expects to be extremely busy as IIJA money begins to be disseminated, but he is concerned about the shortage of engineers and construction workers in the field.

He explains the architectural/engineering world was busy and experiencing a workforce crisis before the federal bill, and blames the worker shortage on the fact that the nation hasn’t invested in STEM (science, technology, engineering and math) education in a long time. “For the past 30 years or more, STEM [education] has not been keeping up with [workforce] demand. So, when you get hit with a big slug of work like this [IIJA money], the problem becomes acute,” Raichle says.

Even with the shortage, he says the IIJA funds must be put to use. “We have been putting this investment off for a lifetime,” Raichle says. “We can’t wait any longer. We’re going to have to struggle with the issue. However, if anyone can do it, this country can.”