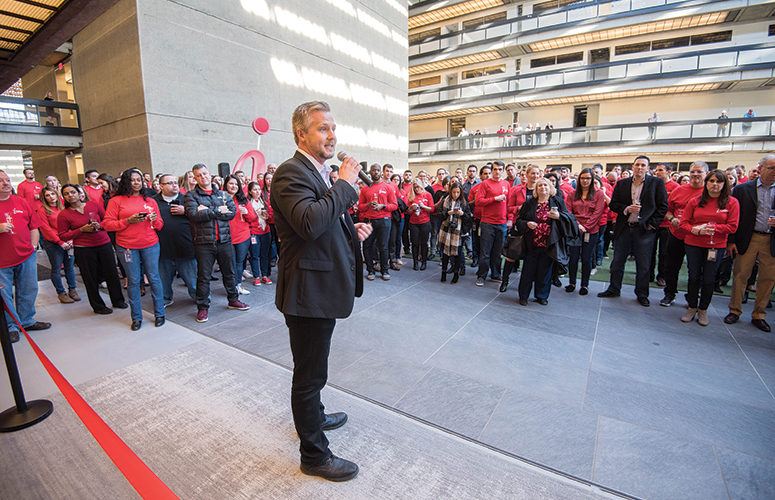 Talented employees are the backbone of every company and ultimately hold the company’s future in their hands. Why, then, do so many businesses still view recruiting as an afterthought?

Holmdel-based recruitment software provider iCIMS has been changing the narrative around talent identification and acquisition, and recently became No. 1 in recruitment technology market share in 2019, according to independent research and consulting firm Acadian Advisory.

Acadian’s research found that during the last several years, companies have been switching their applicant tracking system (ATS) from the technology conglomerates which once controlled the market, to dedicated recruiting technology providers, like iCIMS.

In fact, dedicated talent acquisition platforms, such as iCIMS cloud platform, are now the fastest-growing technology category in the space as employers aggressively look for new ways to engage job candidates amid labor shortages and new technologies.

iCIMS, which serves as the anchor tenant at the historic Bell Works building in Holmdel, has approximately 1,000 employees worldwide – 800 of which work at Bell Works – and in February celebrated its 20th anniversary.

“Twenty years for a software company is really unheard of, so it means a lot,” Day says, adding that he is proud of the company’s approach of building “a real, sustainable, organic, profitable company and proving its worth” – a contrarian approach compared to many tech companies that tend to seek rapid growth at all costs.

“The way that we survived the dot-bomb era and grew our way through the Great Recession is a testament to the profitable model that we’ve built,” Day says.

Of course, this approach hasn’t stunted the company’s growth one bit, as iCIMS was named to the 2019 Inc. 5000 list of the fastest-growing private companies for a 13th year, and now supports more than 4,000 customers, including nearly 20% of Fortune 100 companies hiring 4 million people each year. Only 16 other American companies have appeared on Inc.’s list this many times.

“We’ve been at the forefront of recruiting for the last 20 years and have seen the pendulum swing from talent management providers with bolt-on recruiting modules to dedicated recruitment solution providers, because the power has shifted to candidates,” Day says.

It’s an exciting time for iCIMS, and just last month the company added a new CEO, former CEO of Marketo, Steve Lucas to the team.

“It’s a big moment of reflection looking back over the past 20 years, but at the same time, we are not stopping,” Day says. “We have a new CEO who is looking to drive this thing to the next level.”

“Executives looking to supercharge their growth need to focus on the funnel that matters most – attracting and hiring the best talent – and iCIMS delivers this end to end,” Lucas says. “The potential for growth is unbounded.”