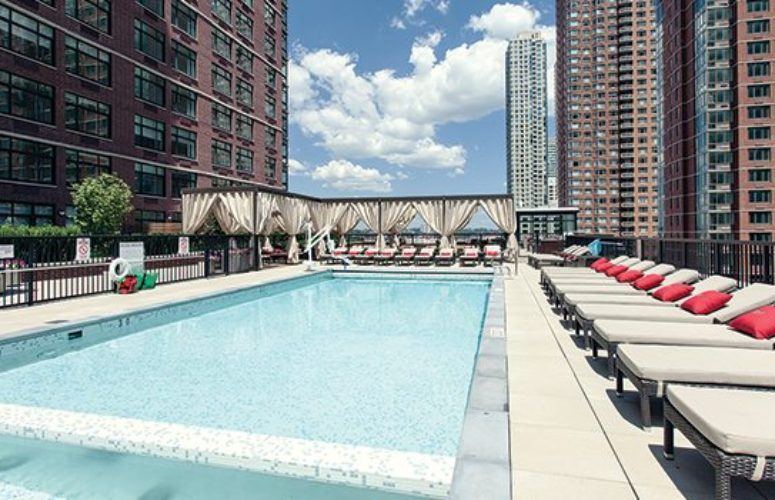 The pool at The One, a luxury residential tower which opened this year in Jersey City. The 36-story building, offering 450 apartments, was developed by a joint-venture partnership of BLDG Management Co., Inc., a fund managed by Ares Management, L.P., and Urban Development Partners.

Once a stretch of dilapidated industrial buildings and rundown housing, the contiguous Hudson River waterfront towns of Weehawken, Hoboken and Jersey City – rightfully known as New Jersey’s Gold Coast – today are among the state’s most highly desirable commercial and residential locations, with 2016 office leasing velocity in the third quarter outpacing all of 2015 combined.

The vibrant, popular three-town expanse of approximately nine miles has attracted a range of companies, including EY (Ernst and Young), Forbes, J.P. Morgan Chase, Jet.com (a tech start-up), Mack-Cali (its new headquarters), Merrill Lynch, Newell Rubbermaid and Omnicom (an international advertising and marketing company), among others. Nearby housing options for employees include thousands of new amenity-rich residential units, such as those in a 79-story condo complex underway in Jersey City, which when completed, will be the tallest building in New Jersey. Novel amenity offerings (dog walks, rooftop bars, open work spaces), infrastructure improvements, transit station redevelopment, thousands of permanent new jobs and millions in added tax revenues reinforce the area’s ongoing renaissance.

After the recession, the job market in New York City – the economic epicenter of New Jersey’s Gold Coast – grew considerably, as did rental rates. Workers seeking more affordable alternatives flocked across the river to the New Jersey waterfront where, according to Pew Research, the average monthly rent for a two-bedroom apartment is $2,900 compared to $5,000 in a similarly trendy Manhattan neighborhood. Millennial employees, now replacing Baby Boomers as the largest sector of the US workforce, especially began populating the area, where they can live, work and play in a hip urban setting while also enjoying a stunning view of the New York City skyline.

Employers looking to attract young, fresh talent followed the flow. Notable corporate moves to the Gold Coast from within New Jersey, according to John Obeid, a senior director with Colliers International, include Pearson Education, which relocated from Upper Saddle River to a 207,000-square-foot space in Hoboken; New York Life, moving from Parsippany to 114,691 square feet of office space in Jersey City; and Nice Systems, relocating from Paramus to a 60,000-square-foot space, also in Hoboken.

Thus, in the course of just a few years, the previously industrial nine-mile span of waterfront transformed into a golden submarket of trendy residential neighborhoods; 24/7 restaurants and entertainment; engaging public spaces; and “Class A office buildings with average asking rents at a record high of $39.92 per square foot, compared to $34.16 in 2014,” reports Obeid. “The state’s many economic development incentive plans, particularly the Grow New Jersey Assistance Program, also are driving growth. New Gold Coast tenants leveraging these incentives have caused the area’s availability rates to drop and asking rents to increase over the past two years.”

Indeed, the Grow New Jersey program “has and is playing a very big role in attracting tenants to the waterfront submarket,” says Robert Norton, senior associate of CBRE New Jersey. “In the third quarter of 2016 alone, nine transactions in New Jersey of over 50,000 square feet received assistance from this program. Four of those took place in the waterfront submarket. Of those four, three were tenants relocating from New York City because of the incentives.”

Here’s a look at various developments taking place along the Gold Coast as well as in a few towns that surround and are becoming part of it, from Bayonne at the south end to Fort Lee in the north – a total of 19 miles.

Port Imperial stands out among the many developments underway in Weehawken. The $3-billion mixed-use, master-planned waterfront project from Mack-Cali spans two-and-a-half miles and includes two Marriott-branded hotels planned for completion by the end of 2017. Earlier this year, the real estate giant announced $36 million in area transactions. Among the results, the company acquired 100 percent interest in land holdings in five valuable Port Imperial waterfront parcels with development potential for roughly 900 apartment homes and 300,000 square feet of office space.

Many large-scale developments are in progress in Hoboken, including the Hoboken Terminal and Rail Yard Redevelopment project. This more than 1.5-million-square-foot venture combines historic preservation with modern office, retail and residential space – and more than $100 million in public transportation and city infrastructure improvements. Economic benefits of the plan include millions in new annual tax revenue; $50 million in added consumer spending annually; and 11,000 new permanent jobs.

SJP Properties is a joint venture partner with Mack-Cali to design, lease and build Harborside 4, a 1.2-million-square-foot office tower on an existing parking lot in Jersey City. The project will commence when anchor tenants commit to long-term leases for the planned 38-floor building.

China Overseas America broke ground January 2016 on 99 Hudson Street, slated to become the tallest building in New Jersey when completed in 2019. The 79-story, 1.1-million-square-foot, mixed-use and luxury residential tower will rise to 900 feet and include nearly 800 condominium units and 19,000 square feet of commercial and retail space. Managed by Plaza Construction, build-out of the 99 Hudson Street project will include 7,500 square feet of new public plazas and open green space as well as key additions to existing commercial and retail storefronts.

Other notable new projects in Jersey City include:

Just south of Jersey City sits Bayonne, where redevelopment is taking place, yet is still in its infancy. Most of the activity includes residential spaces renovated from old manufacturing facilities to satisfy a migration trend that began in the last 18 months, reports Brian Whitmer, senior director of capital markets for Cushman & Wakefield.

“Bayonne has turned the corner and is becoming the next hotbed of up-and-coming residential neighborhoods. The old perception of a rundown Bayonne may be everyone else’s, but the people living there are seeing the area develop in real time,” explains Whitmer. “Many people who chose Hoboken and Jersey City – where rents can be half of those in Manhattan and a third of Brooklyn’s – are starting families and desire affordable single family homes with garages, lots of value and the coveted Manhattan connection. This mindset is bringing the migration of a different kind of generation south of Jersey City. So keep your eyes on the next stop on the bus, and that’s Bayonne.”

From a three-story, 80,000-square-foot Barnabas medical facility about to be completed, to the new 6,200-square-foot soccer and recreation facility for children, various developments are bringing families, jobs and economic revitalization to Bayonne.

Late last year, Castle Lanterra Properties (CLP) completed the $147.5-million acquisition of Alexan CityView, a 544-unit apartment community situated on 7.4 acres along the Bayonne waterfront. Renamed Harbor Pointe, the project is the initial development on the Peninsula at Bayonne Harbor, a 420-acre man-made peninsula offering a panorama of Lower Manhattan. The peninsula reportedly is the only location along the Gold Coast that still has vacant land that is also master-planned, without the need to re-purpose other land for construction. The upgraded Harbor Pointe property features a 9,000-square-foot clubhouse; fitness studio; indoor basketball half-court; resort-style pool; and a seven-story parking garage. CLP also added a new fleet of WiFi-equipped buses to transport residents to the PATH and light rail systems in Jersey City, 15 minutes away. In addition, a ferry service to lower Manhattan from the peninsula is in the planning stages.

Hudson Mews also is among the building activity in North Bergen. This seven-building, four-story gated residential townhouse community will include 288 rental units and is slated for completion by 2018.

Long a destination for high-rise waterfront living, Fort Lee continues to develop its golden coastline both north and south of the George Washington Bridge. Current stand-out projects include Hudson Lights and The Modern.

It sits on part of a 16-acre development parcel shared with The Modern, the second of two luxury community towers from SJP Properties that began construction this past April. It is a mirror image of The Modern’s iconic first tower – a 47-story glass building comprising 450 rental residences in a mix of layouts with high-end features and finishes. The Modern’s two towers are situated between a two-acre public park that will include water features and walking paths, and will also host a 7,000-square-foot restaurant with indoor and open-air dining.

Michael McGuinness is CEO of NAIOP NJ, the state’s leading association for owners, developers and related professionals in office, commercial, industrial and mixed-use real estate and logistics. He says the Hudson River waterfront is “pretty much spoken for now,” noting a strong development focus gradually heading west away from the river.

“No doubt about it: Gold Coast development is having a very beneficial impact on points west, such as spans of Jersey City that border the Hackensack River, slowly moving westward to a rebirth of Newark,” he states. “There are big-time happenings in Harrison and Secaucus, both in western Hudson County, which eventually will move into Essex County, including the Meadowlands.”

One day, as out-of-staters descend on Newark’s Liberty Airport and behold the beautifully re-gentrified surrounding townships – with their classy new buildings, green public spaces and magnificently changed skyline to the east along the Gold Coast – they may think, “New Jersey and me? Hmmm. We may be perfect together!”