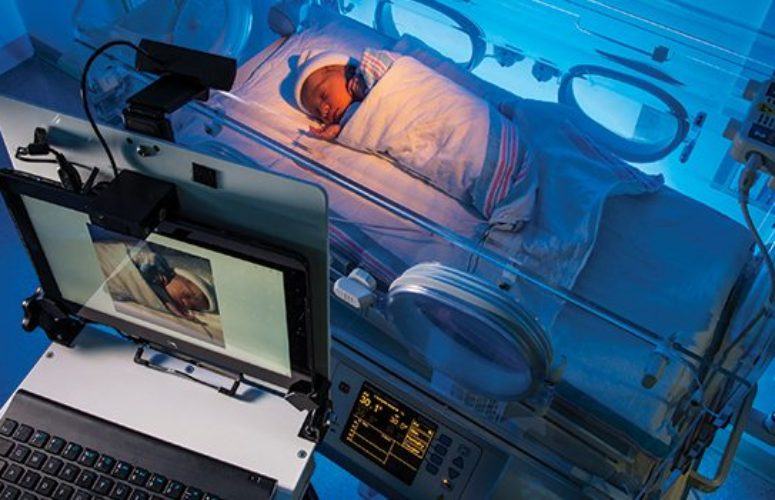 At HackensackUMC, new mothers in the neonatal intensive care unit receive iPads to watch their babies in the nursery.

New Jersey’s 72 acute care hospitals, both for profit and not, need a continual flow of patients to thrive and stay competitive, especially with competing facilities in nearby counties and states. Consequently, hospitals are constantly on the lookout for new technologies to support the high quality care necessary to attract new patients.

The state’s hospitals care for more than 18 million patients each year, resulting in an economic impact of $21 billion in 2013, reports the NJ Hospital Association. Hospitals provide more than 140,000 full- and part-time jobs, making it the largest non-government employer.

At these institutions, numerous advances in technology continue to emerge in key medical specialties such as cardiology, neurosurgery and radiation oncology, as well as in general health information technology (IT).

Morristown Medical Center, the largest hospital in the Atlantic Health System, excels in performing robotic surgery. In January 2015, its surgical team became the first in northwestern New Jersey to use the new da Vinci Xi system, which could more than double the 4,500 procedures performed in the past. It succeeds a former robotic model acquired in 2005 that is still in use.

Dr. Kaynan adds that the new robotic technology not only increases the surgeon’s range of motion, but also reduces critical length of time spent in the operating room. Finally, the Xi increases the range of procedures that can be done in a closed fashion, including more complex cases.

Other hospitals in the Atlantic Health System stand out for their own innovative technologies. At Chilton Medical Center in Pompton Plains, 3-D mammography is available to women for breast cancer screening; Newton Medical Center offers cardiology patients a scan for coronary artery calcium (CAC) used to detect the level of calcium in the heart’s arteries; and Overlook Medical Center in Summit does functional brain mapping to treat malignant brain tumors that, elsewhere, might be considered inoperable.

Yaron Moshel, MD, brain tumor neurosurgeon at Overlook’s Carol G. Simon Cancer Center, refers to all the technologies combined in functional brain mapping as a “GPS tracking device” that allows him to find his way around the brain during surgery.

Results of diffusion tensor imaging and MRI scans help to guide the surgeon with images on a computer in the operating room. Then, during surgery, “we electrically stimulate the brain to map out what each milometer of brain is doing in relation to the function being tested, e.g., vision, reading, writing and hand movement,” Dr. Moshel explains.

“This Xi robot allowed me to perform the surgery without spreading or cracking the patient’s ribs,” notes Dr. Lee. “It involved making only a small incision, significantly reducing the trauma to tissue surrounding the surgical area.”

Mitral valve prolapse causes some blood to flow back into the atrium of the heart, making the heart work harder and leading to further damage.

Following surgery, Dr. Lee’s patient had no complications and was home in a few weeks and back to his favorite sport of jogging.

Similarly, at Camden-based Cooper University Hospital’s Heart Valve Clinic, innovative devices and surgical techniques offer hope to patients who were previously not treatable with surgery and had no other options. The treatment – known as transcatheter aortic valve replacement (TAVR) – is one in which Cooper excels.

The Edwards Sapien valve, still used at Cooper, was the first device of this kind to be available to the high-risk patient population.

The implantation of these devices “not only makes patients feel better, but impacts their mortality,” Dr. Sabir says. “It allows patients to go back to their normal activities in a much shorter time than if they underwent open heart surgery.

“The CoreValve’s use was recently expanded by the FDA to treat patients who previously had a tissue aortic valve replacement and were in need of a second one.

“It’s not just the aortic valve that we treat with a catheter, but also mitral valve disease, which is a leaky valve,” Dr. Sabir says. The mitral valve is the second of four heart valves which ensure blood flow through the heart’s chambers to the body.

After a pilot study, Cooper recently became the first hospital in South Jersey to offer the recently FDA-approved Watchman device for non-valvular atrial fibrillation. It offers a new stroke risk reduction option for patients with this condition who seek an alternative to long-term warfarin, a blood-thinning therapy.

Barnabas Health’s Saint Barnabas Medical Center, located in Livingston, has been a pioneer in radiation oncology in New Jersey for more than three decades. Dr. Alison Grann, chair of radiation oncology, singles out these treatments used to treat patients who are not surgical candidates, i.e., stereotactic body radiation therapy (SBRT), Radium-223 and CyberKnife.

“At Barnabas, we talk about technologies in the broad sense as all medical things we offer patients that are new,” Dr. Grann notes. In other words, the term encompasses not only machines, but every part of the treatment involved in patient care.

Radium-223 is not a machine, but a radio isotope that is administered intravenously and is used to help treat certain advanced stage prostate cancers.

Saint Barnabas will be adding CyberKnife in the fall, Dr. Grann notes. It delivers treatment in a condensed time frame and delivers higher doses without impact to the surrounding tissue.

Physicians at Barnabas, like most hospitals, continuously evaluate new technologies through evidenced-based literature in each of their medical specialties.

Health IT: Connectivity is Key

Across all medical specialties, hospitals are focusing on information technology (IT), which provides a platform for the exchange of information about patients throughout hospitals and with physicians’ private offices.

“Implementation of this sort of technology takes years, but for us it happened very quickly,” Dr. Kifaieh says, noting that CarePoint is a young system and that it all “came together” in the past six to nine months.

“We’re all on the same system, Meditech,” he says, which is an electronic medical record (EMR) vendor. The medical staff can look at a patient’s previous medical history at any of its hospitals, including medications. The in-patient emergency rooms (ER) have access to all records. “Because our facilities are so close in proximity, patients might go to one hospital today and another the day after.”

Previously, health providers used paper charts, which can get lost, Dr. Kifaieh notes. The new IT has helped them avoid lots of phone calls, faxing, and downed fax machines.

To complement the hospital platforms, CarePoint has started EMR installations in its physicians’ practices. Its physicians are all going to be on the same system, which is called e-Clinical Works, providing them with easy access to patients’ hospital records.

“The key question was how to make the two systems talk to each other, which is typically the challenge of healthcare systems,” Dr. Kifaieh notes. But in the end, CarePoint succeeded in finding a way to build communication between the hospitals and physicians’ offices.

“We do these things to help us better serve the patient and decrease the chance of certain errors in patient care. Additionally, it helps patients manage their own care.”

“All of our electronic health records (HER) are mobility-based through iPhones and iPads, “and everybody can access everything from all places,” notes Shafiq Rab, MD, vice president and chief information officer (CIO). In addition, “we have all the apps on an iPhone, so an out-patient can communicate with the hospital.”

“We can capture the necessary vitals, blood pressure, height and weight –  even how many feet you have walked,” Dr. Rab says. The data goes directly from the iPhone into the patient’s electronic health records, and that goes directly to the doctor. “If you’re supposed to walk 1,000 feet, and only walk 500, your doctor sends you an alert.”

HackensackUMC was among the first to integrate Apple HealthKit personal health data into the patient’s EHR, which allows for the consolidation of data into one bucket. Apple brings together a patient’s calories from the food tracking app … and glucose reading from the glucose meter app … and the last blood pressure reading from that app.

Apple interfaces the data to the EpicMy Chart app, which in turn feeds directly into the patient’s EMR at the hospital. The NJ Hospital Association reports that more than 100,000 Health apps are currently available on Apple iOS and Android platforms, a number expected to multiply to 500,000 by the end of 2015.

In-patients receive iPads so that while lying in bed, they can watch a movie, order food, talk with loved ones or look at their medical records. New mothers in the neonatal intensive care unit use it to watch their babies in the nursery. Hospice patients can Skype with family members across various countries.

The Rover program gives nurses iPhones with a built-in bar code reader to safely administer medications and document vital signs after confirming the patient’s identity through his or her wrist band bar code.

With mobile devices, “people don’t have to go to a computer to log onto a portal, although we have that, too,” Dr. Rab emphasizes. “We live in a mobile world.”

Technology is defined as the science of the application of knowledge to practical purposes. Hospital physicians point out that while important, technology is meant to enhance the quality of patient care and machines are only one element.

Dr. Kaynan, of Morristown Medical Center, says: “There’s an art to doing surgery. It’s never just about the tool; it’s how you apply the tool. One of the great things at our medical center is our large talent pool of physicians, nurses and other caregivers.”

Dr. Rab, of HackensackUMC, adds: “Technology isn’t responsible for attract­ing patients, but doctors are” … as is the care given by our nurses and support staff. “So, that – combined with technology – makes it easier to attract patients.”