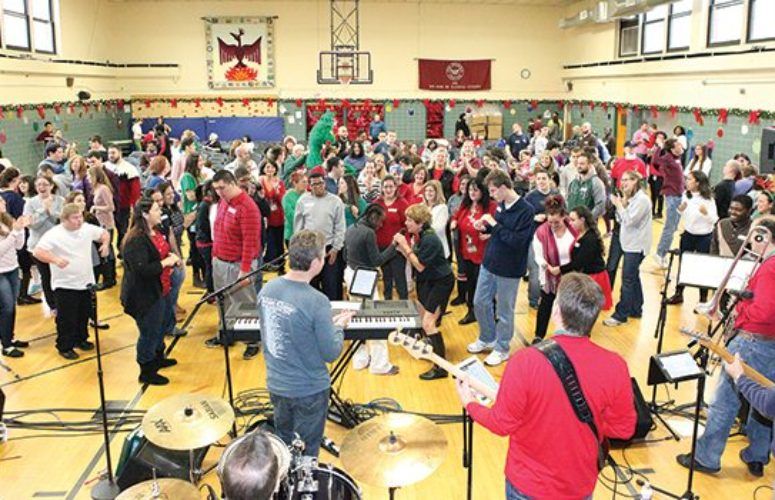 A Holiday Express band and volunteers at one of the 80 locations the organization visited last year, delivering the “gift of human kindness” during the holiday season.

From November 7th until December 24th, the 2,000 volunteers of Holiday Express will be putting on a record 90 events at numerous organizations in the tri-state region – delivering music, food, gifts, financial support and friendship to those with the greatest need for the gift of human kindness. An estimated 24,000 people will feel the impact of the organization’s outreach. They include those with mental and physical challenges, veterans, individuals in addiction and recovery programs, the isolated, the poor, the homeless and children with serious illnesses.

“We try to visit places that, if we weren’t there, people would get little to no attention during the holiday season,” says Holiday Express Director Amy Robinson. “This is our mantra.”

Holiday Express was founded in 1993 by Tim McLoone, who is perhaps best known for the nearly dozen restaurants in the state that bear his name. In the early 1990s, McLoone was working for the New Jersey Nets, and helped the NBA team organize a program to feed the homeless in the city of Newark. The Christmas Eve event was a success, but it was far removed from what Holiday Express conducts today. First off, there was no music.

The holiday spirit had bitten McLoone, so when the Nets showed no interest in continuing the event the next year, he decided to strike out on his own. He credits his friends and employees at the original Rum Runner Restaurant in Sea Bright for helping him organize the first official Holiday Express events, which took place at Better Beginnings in Connecticut, an organization that assists teens with children of their own, and a Newark soup kitchen (again on Christmas Eve).

McLoone rounded up 17 musician friends (he himself plays piano) and began rehearsals at his restaurant. “It was such a cacophony, until we broke into John Lennon’s ‘So this is Christmas’ (officially titled ‘Happy Xmas – War is Over’),” he remembers. “Everything got quiet and we all started singing … that launched it. Then we thought, “’If we are going through the trouble of learning these songs, do we want to do even more events?’ Everyone said, ‘Yes.’”

Today, a Holiday Express show last three hours. Customized gift bags (duffle bags) are given to the needy. They include a blanket, gloves, socks, a hat, toiletries and more. All of these items are collected throughout the year by Holiday Express staff members and volunteers, and stored in the organization’s 8,500-square-foot warehouse in Tinton Falls.

The organization’s operating budget is approximately $1.2 million. It raises that amount via: special concerts at the Count Basie Theater, NJPAC and the Red Bank Tree Lighting ceremony; a golf outing and clambake; in-kind donations; and direct public support.

Next year, Holiday Express will celebrate its 25th anniversary, and the goal is to have 100 events during the next holiday season. The organization will probably have no trouble gathering volunteers, many of whom come back year after year.

According to Dianne Meserlin, dubbed a volunteer extraordinaire, the magic Holiday Express has on its volunteers is this: “When the last chord of the song ‘Nobody Wants to be Alone on Christmas’ plays,  I always look at our volunteers, and the tears are just running down their faces. As they finish loading up the trucks to go home, everyone is hugging each other.”

Adds Robinson, “I can’t imagine spending my Christmas any other way.”