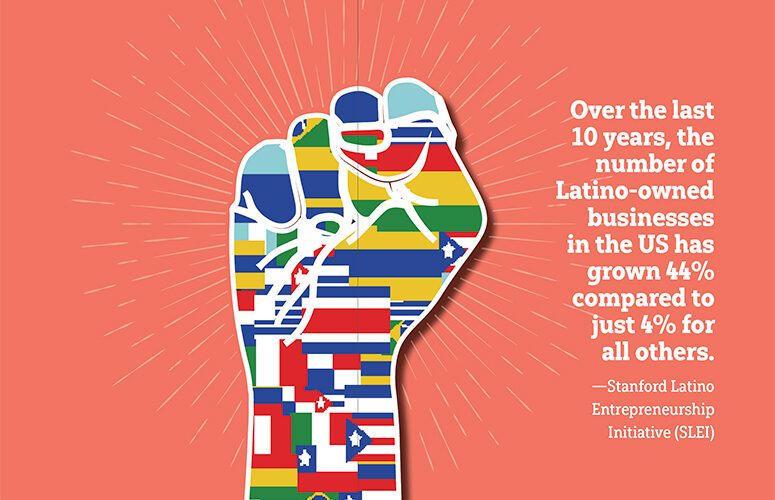 Hispanic Businesses are a Growing Powerhouse

Latino-owned companies are growing at record rates and have a plethora of support to tap into. However, securing funding remains a challenge.

In New Jersey, Hispanic Americans boast some of the highest rates of business ownership in the country. According to the New Jersey Economic Development Authority (NJEDA), the Garden State is home to more than 120,000 Hispanic-owned businesses, which create thousands of jobs and collectively contribute more than $20 billion to the state’s economy annually.

In fact, the NJEDA points out that in 2018, New Jersey’s Latino Gross Domestic Product was $97 billion, larger than the entire economic output of the state of Hawaii.

“Latinos account for the largest minority group in the United States and are the second-fastest growing group in the nation,” says Marelyn Rivera, executive director of the Center for Hispanic Policy, Research and Development. “New Jersey prides itself on its diversity, and has acknowledged the importance of its communities by deepening the work and relationships with Latino communities [specifically].”

A Strong Network of Support

The Statewide Hispanic Chamber of Commerce of New Jersey (SHCCNJ) has been a proponent of New Jersey’s Hispanic-owned businesses for more than three decades, and works to promote the continued growth and development of these New Jersey businesses by working with the public and private sectors to identify and expand opportunities for its members.

One example of this work by SHCCNJ is the Latina Entrepreneurship Training Series (LETS), a free, virtual workshop for female entrepreneurs who want to learn about topics such as leadership, empowerment, business scale-up, financial management, strategic marketing pillars, and more.

“With its highly talented workforce and its centralized location along the Northeast Corridor, New Jersey is the perfect place for our members to establish their businesses,” says SHCCNJ Chairman Luis O. De La Hoz. “We created LETS and HETP to help our members compete not just here in the Garden State, but in the global marketplace as well.”

SHCCNJ President and Chief Executive Officer Carlos Medina also credits his organization’s partnership with the NJEDA as an additional pillar of support for Hispanic businesses.

“We are very appreciative of our longstanding partnership with the NJEDA, the resources it provides, and the open line of communication we have with its leadership,” Medina adds. “This support has been extremely critical to so many of our members during the pandemic and [various natural disasters], as it has allowed them to expand their networking opportunities, connect with mentors, and have access to educational resources necessary to flourish in New Jersey.”

Since March of 2020, the NJEDA has approved more than 91,000 support awards for businesses impacted by COVID-19, and has provided more than $650 million worth of pandemic relief. Many NJEDA programs have specifically targeted the most at-risk businesses, including micro businesses, Hispanic-owned businesses, and businesses in communities that were eligible to be designated as New Jersey Opportunity Zones.

“There are so many places that want to help women and Hispanic-owned businesses grow,” says Jessica Gonzalez, founder and CEO of Newark-based InCharged. “There are tons of resources in the state and online that can help you. The more you get involved and network, the more these opportunities will open up for you.”

Gonzalez, a lifelong entrepreneur and self-starter, founded her event technology company InCharged more than a decade ago. Since then, InCharged has enjoyed great success and has partnered with companies such as Coca-Cola, ESPN and Google.

Gonzalez says the biggest challenge she has faced as a Hispanic-entrepreneur was the battle within herself.

“Everyone has their own set of challenges, and I feel that mine was really in myself,” she says. “The moment that I broke down the barrier within myself was the moment that I was able to feel comfortable in my own skin, and go in and command a room. As an entrepreneur you first have to believe in yourself. Once you do that, then it doesn’t matter what anybody else cares about.”

While the growth of, and support for, Hispanic-owned businesses is encouraging, a major hurdle still remains.

According to SLEI, only 20% of Hispanic-owned businesses that applied for national bank loans of more than $100,000 obtained funding, compared to 50% of white-owned businesses. When looking at loans of all sizes, only 51% of Latinos received loans versus 77% for whites.

Because of this, Latinos have been more likely to seek and receive funding from sources that expose them to more personal financial risk.

For Gonzalez, the daunting task of securing funding pushed her to forgo outside financial help altogether, and bootstrap her business with her own money.

“I was more intimidated by the process and everything that I needed to do to [get funding], that I didn’t personally try to get financing,” she says.

While Gonzalez is a self-funded success story, for some Hispanic entrepreneurs, the complexity of navigating the world of funding – or even worse – the outright denial of funding, can stop these businesses from even getting started.

“I think we are miles ahead of where we were a few years ago, and I think we are trending in the right direction,” Gonzalez adds. “But there is more that can be done.”